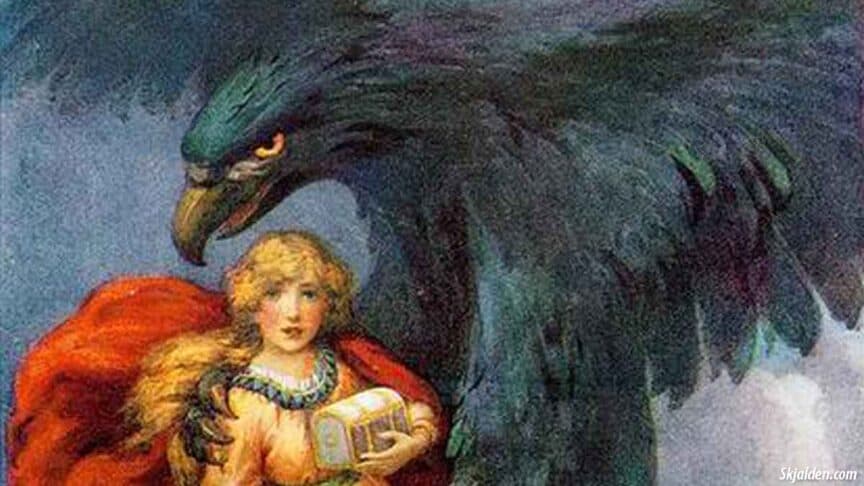 Annar is the second husband of Nat “Night”, their daughter is Fjorgyn “Earth”.

His name Aud means “Wealth” he is the son of Night “Nat” and Naglefari.

Aurvandil is known as the brave. Aurvandil is the husband of Groa. Aurvandil was rescued by Thor from the giants and carried him across the icy river Elivagar in a basket. One of Aurvandil’s toes froze, and Thor broke it off and threw it into the sky, where it shines like a bright star.

Baugi is a giant and the brother of Suttung. Odin worked disguised as a worker named Bolverk for Baugi to gain the trust of him. Odin worked so well that Baugi agreed to lead him to the mountain where the Mead of poetry was hidden. It was guarded by Gunnlod, Suttung’s daughter. Baugi then drilled a hole in the mountain, to allow Odin a sip of the mead. But Odin changed into a serpent and slithered through the hole to get the mead.

Beli is the brother of Gerda, Freyr’s lover. Beli challenged Freyr, and Freyr killed him with a staghorn because Freyr had given his magic sword to Gymir, Gerda’s father.

Bestla is a giant and the wife of Borr. Bestla is the mother of the three Gods, Odin, Vili, and Ve. Bestla is the daughter of the giant Bolthur. Borr is the son of Buri, who is the father of the Gods. Borr is married to Bestla, the daughter of a giant. Borr and Bestla have three sons, Odin, Vili, and Ve. Bolthur: Thorn of Evil Bolthur is the father of Bestla, and has a son whose name is unknown.

Borr is the son of Buri, who is the father of the Gods. Borr is married to Bestla, the daughter of a giant. Borr and Bestla have three sons, Odin, Vili, and Ve.

Bolthur is the father of Bestla and has a son which name is unknown.

He is a dwarf that with his brother Nabbi made the magical boar named Hildisvini. Dain also made the sword “Dainsleif”, it is cursed. Once it has been drawn, it must kill a man before it can be returned to the sheath. A blow from this magical sword will never fail to kill or cause a wound that never will heal.

Eggther is a watchman of the giants that at Ragnarök “The end of the world” will sit upon a grave mound and play his harp.

Fjolsvin is the giant who guards the gate in Jotunheim.

Fornjot is a giant, and the father of the wind.

Gang is one of the storm giants, his father is Olvaldi and he has two brothers Thiazi and Idi. His father Olvaldi has left Gang and his brother’s piles of gold to be divided among them.

Geirröd is one of Thor’s mightiest enemies. Geirröd is the father of Gjalp and Greip. Geirröd and his two daughters Gjalp and Greip are dead. Once Loki had once taken the shape of a hawk and had been captured by Geirröd. The only way Loki would avoid death was to promise to bring Thor to Geirröd’s hall, without his power belt and Thor’s hammer. Because Thor trusted Loki, he agreed to come to Geirröd’s hall, without his belt and the hammer Mjölnir.

Fortunately for Thor, they made a brief stop by a giant named Grid, and she warned Thor about the plan while Loki was asleep. She loaned him, her own strength belt, magical iron gloves, and her scepter. Thor fully equipped, he and Loki traveled to Geirröd’s hall the next morning. When they arrived, Geirröd was not home, but they were met by the servant. But it was not long before Gjalp and Greip tried to kill Thor, by lifting his chair and smash his head against the ceiling.

Thor used the wand to force the chair down, so it was instead Gjalp and Greip that was crushed underneath the chair. But then came Geirröd himself, and by using a tong, he picked up a red-hot iron ball and threw it at Thor, Thor caught it with the gloves he had loaned from Grid. Furious at this behavior towards him, Thor threw the still burning, red-hot, and steaming iron ball back through the hall, directly through an iron pillar, and deep into the belly of Geirröd. Geirröd and his two daughters Gjalp and Greip were dead, and Thor and Loki left the house and returned to Asgard.

Gerd is extremely beautiful. Gerd is the daughter of the giants Gymir and Aurbode. Freyr fell in love with her, but Gerd would not marry Freyr, but she was forced to do so, otherwise, she would be cursed. Gymir is a giant and the father of Gerd. Beili is the brother of Gerda, Freyr’s lover. Beli challenged Freyr, and Freyr killed him with a staghorn because Freyr had given his magic sword to Gymir, Gerda’s father.

The giant who build the walls around Asgard. He has a stallion named Svadilfari, which Loki stole from him. So he could not make the walls of Asgard in the time frame he was supposed to.

Gilling is a giant and the father of Suttung. Gilling was killed by the two dwarfs Fjalar and Galar.

Grid is a jötunn and a friendly woman, Grid had a power belt, iron gloves, and a magic wand. Her wand is called Gridavol. She was the mother of one of Odin’s sons, the silent God Vidar Grid made a special shoe, so Vidar can stand in Fenrir yawn.

Groa has the knowledge of witchcraft and she was a Völva “Soothsayer”. Groa is married to Aurvandil the Brave and the mother of Svipdag. Svipdag visited Groa for advice in Niflheim after her death. Groa also tried to remove the whetstone that was in Thor’s skull, after his fight with Hrungnir. Odin used sorcery to raise Groa from the grave, for a short amount of time. Groa then foretold Odin, the prophecy of Ragnarök.

Gunlod is the daughter of the fire giant Suttung. Gunlod was the woman that protected the Mead of poetry that was made from the blood of Kvasir.

Gymir is a giant and the father of Gerd.

Hrungnir is tall and stone-headed, and the strongest of the giants, Hrungnir has a heart and a skull of stone. Hrungnir has a whetstone as a weapon. Hrungnir has a horse named Goldfaxi “Golden Mane”, he bet the horse in a race against Odin which he lost. Hrungnir was killed in a duel with Thor.

Hymir is an elder jötunn a sea giant, who owns a large cauldron that the Gods uses to brew their mead.

Hyndla is a giant who was visited by the Goddess Freya. Freya asked Hyndla to reveal the background of her human lover, Ottar.

Jarnsaxa has two sons, Magni and Modi with Thor.

Kvasir: The god of poetry and wisdom

Kvasir is a very wise man, his name Kvasir means saliva “spit”, and that is a reminder of how Kvasir was created. When the war between the Aesir and the Vanir ended, it was decided that all the Gods, from both the branches should spit in a huge barrel. From the saliva, Odin created a new God. The new God was named Kvasir, he was created from the saliva of all the Gods combined. Kvasir is very wise, and he can answer any question and was known for his great wisdom. Kvasir journeyed throughout the realms and learned mankind wisdom.

Ran is married to Aegir the lord of the sea. Ran lives in the coral caves under the island of Hlesey “Laesoe” or “cat’s throat”. The island is between Jutland and Zealand in Denmark. Her coral caves are only lightened up by the gleam of her gold. She dragged drowning sailors who have any gold down to her coral caves, in her huge fishing net.

Rind is the daughter of Billing “King of the Ruthenians”. Rind and Odin have a son named Vali.

He is the father of the storm giants, Thiazi, Idi, and Gang. When Olvaldi died, he left a large amount of gold for his three sons. There was so much gold, that no scales could weight it, so the sons measured it by the mouthfuls.

She is a very beautiful giantess, who has eight maiden Goddesses.

She is a giantess, and the guardian of Gjallarbru, the bridge over the river Gioll, on the way to the Niflheim. Modgud allowed the newly dead to use the bridge to cross if the soul stated his or her name and business.

Mokkurkalfi is made by the jotuns, from the clay in the river bed in Jotunheim, to frighten Thor. Mokkurkalfi is a giant made of clay and has a heart from a mare. Although the creature towered far up into the clouds it moved very slowly and its legs were vulnerable to attacks. Mokkurklafi and Hrungnir were fighting Thor and his servant Thalfi on the battlefield.

Naglfari is a giant, and the first husband of Nat “Night”, they have a son named Aud.

He is a giant and the father of Nat “Night”, he was one of the first giants in Jotunheim.

Sköll ”Treachery” is a wolf that chased the horse Skinfaxi. Skinfaxi is the horse that pulls the chariot of Day, across the sky each day. Hati Hróðvitnisson (first name meaning) “He Who Hates, Enemy” chased the moon, which is pulled by Hrimfaxi across the night sky, until the time of Ragnarök, when they will swallow the Sun and the Moon. After which the Fenrir wolf, will break free from his bonds and kill Odin.

Thiazi is a mighty storm giant that lives in a house called Thrymheim, “Noisy home” it is in Jotunheim. He is the son of the giant Olvaldi, and the brother of Gang, and Idi. Thiazi has a son named Skadi. Occasionally Thiazi cloaked himself like an eagle, he also did this once to trick, Loki into helping him kidnap Idun, the Goddess in charge of the apples of youth. In the end, Loki tricked the giant Thiazi, and he was killed at the gates in Asgard. Skadi the daughter of Thiazi, was given to the Vanir God Njord, as compensation for her father’s death. After the death of Thiazi, Odin threw the eyes of Thiazi into the sky, so they would stay there forever as lighting stars.

She is the giantess who refused to cry for the death of Baldur, so he would remain in Hel, until Ragnarök. Some believe that Thokk might have been Loki in disguise.

He is a frost giant, and sometimes called king of the frost giants. He once stole Thor’s hammer and demanded the Goddess Freya as his wife, to give the hammer back. The trickster Loki helped Thor get his hammer back, and Thor killed Thrym with his hammer Mjölnir.