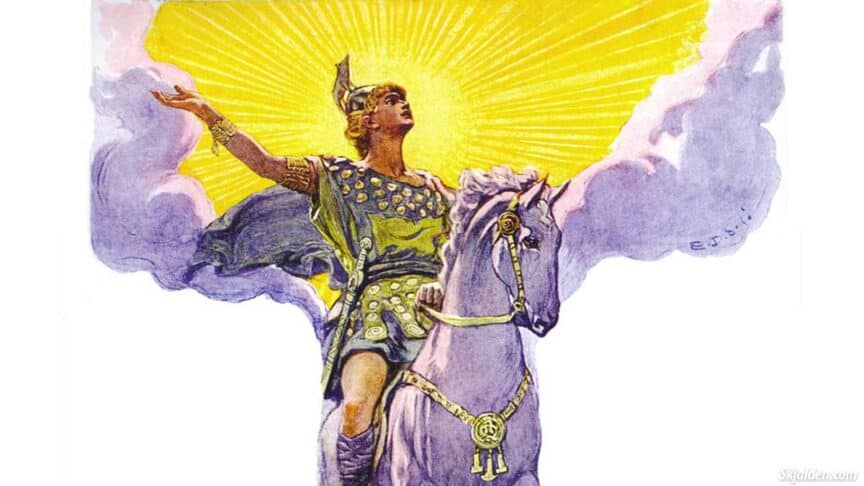 In Norse mythology, Freyr is a Vanir and the central male god of fertility. He is the son of Njord, and he is the brother of the goddess Freya, unfortunately, his mother is unknown. His name means “Lord” and it can be spelled in various ways, for instance, Frey, Frej, Frø, Frö, and Frøj.

He is associated with rain, sunshine, harvest, and prosperity, he lives in Alfheim, the home of the light elves, which was given to him as a present, it is said that this realm is the most beautiful realm.

Freyr is in particular associated with the horse cult, and in the Hrafnkels saga, a Gothi, a name for someone who had a position of political and social prominence in the Icelandic Commonwealth, killed a man for riding a horse that he had dedicated to the god.

It is the phallic symbol that is associated with Frey, this also highlights his status as a fertility god.

When Freyr wants to travel around he has his trusted boar, Gullinbursti, and a ship called Skidbladnir, which can be folded so tiny that it can fit inside a pouch.

According to the Ynglinga Saga by the author Snorri Sturluson, Freyr is the ancestor to the Ynglings under the name Yngve-Frey. The Ynglings is a Swedish dynasty of kings that lived at Uppsala. A branch of this family lineage would eventually travel to Norway and become kings. It is speculated that Halfdan the Black (Halvdan Svarte), and Harald Fairhair (Harald Hårfager) are direct descendants of the Ynglings.

The German medieval chronicler Addam of Bremen describes in his chronicle Gesta Hammaburgensis, that the heathens in the great hall in Uppsala worshipped Freyr. This combined with the fact that he has on several occasions been referred to as the Swedish god of sacrifice (Old Norse: blótgoð svía), only underlines his importance to the Swedes.

He was also worshipped in other parts of Scandinavia, for instance, in Denmark, is the town of Frøstrup named after him, and on the 22nd of April in 2014 a figure depicting either him or Freyja was found at the town of Revninge.

Today there are still many areas around lake Mälaren, south of Uppsala that have been named after Freyr, for instance, Fröslunda and Frösvi.

According to the saga Skírnismál, Freyr secretly sneaked up the stairs to Odin’s throne Hlidskjalf and looked out over the nine realms. As he was looking he caught the sight of a woman, upon seeing her, he thought that she was the most beautiful woman that he had ever seen.

This was Gerd, the daughter of the jötnar Gymir and Aurboda. Freyr could not stop thinking about her, it got so bad that he would neither eat nor speak. Because of this, he started to become very ill, which made his father Njord upset and concerned about his son.

He had to know what was going on, so he sent the servant Skirnir to check on his son, who reported back to him that he was very much in love with the jötunn Gerd. The servant was sent to Jötunheim so he could try and bring her to Asgard.

Skirnir was given Freyr’s magical sword to protect himself, after all, he was going to the land of the giants, and you never really know how they will act. When he arrived at Gymir’s house he announced the marriage proposal from Freyr’s father. If she accepted, then she could have some of the apples of youth that he had brought along as a gift, but Gerd would not hear it, and she immediately rejected the offer.

Skirnir began to offer her more gifts trying to convince her, even Odin’s ring Draupnir, but she still didn’t care. Finally, he had enough and began to threaten her with curses, by using the secrets of the runes. This frightened Gerd so much that she agreed to marry him, but only on the condition that he had to wait nine days, this was her way of torturing the feelings of Freyr.

Freyr will die without his sword at his side at Ragnarök to the fire jötunn Sutr, this is something that Odin already knows will happen, a Völva told him about it in the Poetic Edda poem Völuspá.