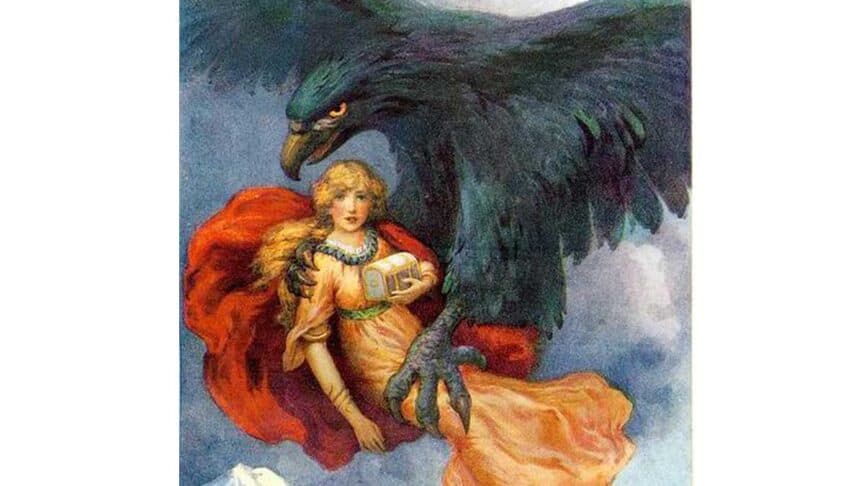 Thiazi (also spelled Þjazi, Thjazi, Tjasse) is a jötunn in Norse mythology. He is the father of Skadi who is known to be quick with the bow. Thiazi lived in Jötunheim (the land of the giants) until he was killed by the Aesir.

According to the second part of Snorri Sturluson‘s Prose Edda (Skáldskaparmál) the language of poetry. The three Aesir, Odin, Loki, and Honir were traveling on a journey through the mountains until they saw a herd of oxen.

They decided to make a camp, and build an earth oven, so they could cook one of the oxen. But no matter how much wood they used, or how hot the fire was, the meat would not be cooked.

Suddenly they heard a voice coming from the top of the huge oak tree next to them, it was Thiazi who had shapeshifted himself into an eagle.

Thiazi: If you let me eat first, then I will help you cook it.

The Aesir agreed, so he flew down from the tree and began to eat from the raw meat. He took huge bites, and more and more of the oxen disappeared into his mouth.

This made Loki so angry, that he grabbed his long staff, and tried to hit Thiazi, but unluckily for Loki, the staff got stuck in the feathers, and when Thiazi began to fly so did he.

Thiazi carried him so high up in the skies, that he began to beg to be put down on the ground again. But the eagle refused and flew low through the treetops so Loki hurt his legs. Thiazi would only put him down again if he agreed to lure Idunn out of Asgard with her apples of youth, which he agreed to do.

Later in the story, Loki eventually lures the goddess Idunn out of Asgard and into the nearby forest. He had tricked her to bring the apples of youth, so she could compare them to some apples that he had found.

As soon as she was out of sight from the guards in Asgard, Thiazi flew down from a tree and grabbed Idunn, and brought her back to his great hall Thrymheim in Jötunheim.

Because Idunn and her apples of youth were missing, the gods began to grow old and grey. When they got word that Loki was responsible they threatened him with torture and death unless he went and rescued her.

Loki borrowed a magical coat from the goddess Freya, so he could take the shape of a falcon and fly to Jotunheim.

When Loki arrived, he saw that Idunn was alone, so he used a spell that turned her into a nut, and carried her out of the window, and back towards Asgard. When Thiazi got wind of this, he set in to pursue them.

When Loki was near Asgard, the gods saw him with the nut, followed by the eagle. So they went out of the gates and lit a fire that burned Thiazi’s feathers when he tried to grab the nut from Loki’s claws. He fell to the ground and died on the spot.

His daughter Skadi went to Asgard to seek revenge, but she was offered compensation, including the hand of Njord in marriage. To close the deal, Odin placed Thaizi’s eyes in the night sky as stars.