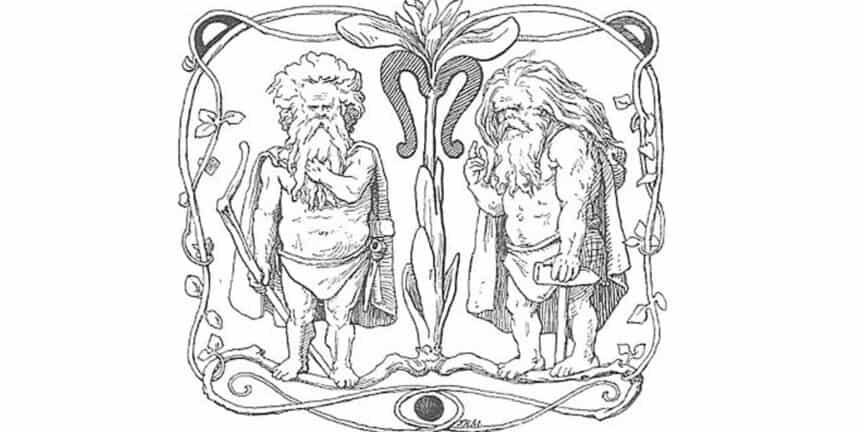 Alfrigg, Berling, Dvalin, and Grerr are the four dwarves, who made the Brisingamen for the Goddess Freya.

Austri Norðri, Suðri, and Vestri (“Northern, Southern, Eastern, and Western”) are the four dwarves that hold up the sky.

Eitri is a dwarf who helped create three of the precious objects of the Gods. In a competition, the trickster Loki bet the dwarf Brokkr and Eitri, that they could not make anything as fine as the gifts, as another group of dwarfs had already made for the Gods, a golden headpiece, a ship, and a spear. Eitri and his brother Brokkr, then crafted a boar with golden bristles “Gullinbursti“, a gold ring “Draupnir”, and Thor’s hammer “Mjölnir”. Experts working in the later part of the 20th century agree that earlier scholars had mistakenly applied the name Sindri to the brother of Brokkr.

Hreidmar is a master magician, Hreidmar has three sons Regin, Fafnir and Otr, and two daughters Lofnheid and Lyndheid. Hreidmar owned a house of glittering gold and flashing gems built by Regin and guarded by Fafnir. After Otr was accidentally killed by Loki, the Aesir repaid Hreidmar with the cursed ring Andvarinaut, plus the gold made by the ring. Fafnir and Regin killed their father for the cursed ring Andvarinaut. Fafnir decided that he wanted the ring for himself, so he turned into a dragon and scared Regin away. Lynheid is the daughter of Hreidmar, she has a sister named Lofnheid and three brothers, Fafnir, Reid, and Otr.

He is a dwarf that suddenly appeared at Balder’s funeral, and got in the way of the God Thor. Thor was as always hot-tempered and kicked Lit, into the flames of the funeral ship. Lit hereby gained immortality in Norse mythology, by being burned to ashes along with Baldur and his wife Nanna.

Lynheid is the daughter of Hreidmar, she has a sister named Lofnheid and three brothers, Fafnir, Reid, and Otr.

Nabbi is a dwarf, but not much is known about him.

Otr is the son of Hreidmar, Otr has two brothers Regin and Fafnir. Otr is a shapeshifter and usually took the form of an otter. He was killed by Loki because he thought he was a real otter. Hreidmar demanded to get enough gold to cover the dead otter’s pelt and fill its insides.

Regin is the son of Hreidmar and he has two brothers, Otr and Fafnir. he also has a foster son named Sigurd. While his brother Fafnir was cursed by the ring Andvarenaut and ended up turning himself into a dragon. Regin worked as a blacksmith for the Danish royal court. Regin was equally affected by the curse as Fafnir was, and got Sigurd to go and kill Fafnir. And Regin then planned to kill Sigurd afterward, but the birds warned Sigurd, what Regin was about to do and killed Regin first.