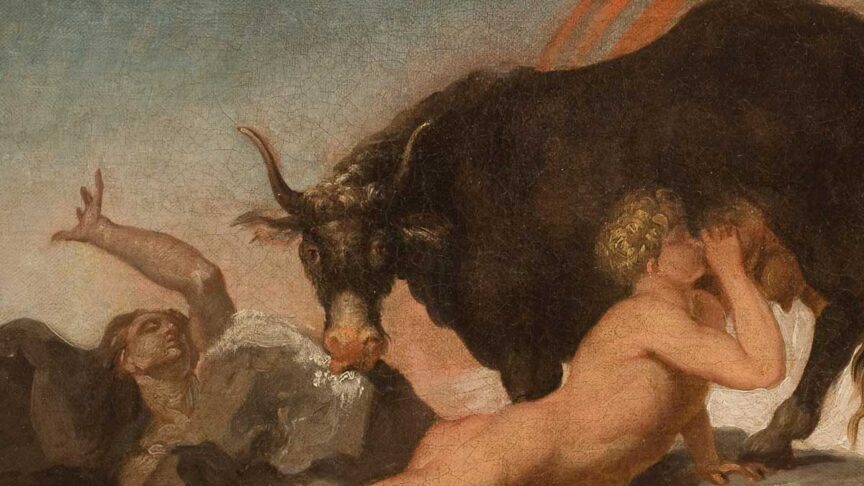 Búri is the ancestor of all the Aesir in Norse mythology, his name means the producer/father in Old Norse. He came into existence by either Seidr (magic) or by the will of nature, when the cow Audhumbla licked him out of a salty ice-block on the plains of Niflheim.

It took Audhumbla three days to lick him free. On the first day, the hair began to appear, on the second day, the entire head was visible, and on the third day, Búri the father of the Aesir stood naked, proud, strong, and liberated from the chains of ice which just a moment ago had held him, prisoner.

Since nothing grew in Niflheim, the only available nourishment was the milk from the cow that had licked him free. Búri drank the milk, probably with a slight disgust at the sight of the jötunn Ymir, who was greedily slurping every drop of milk that he could from the udder.

Búri had a son named Borr, how, or with whom he made this son is unknown. Búri might have used Seidr since there were no females to give birth to a child.

The only source that mentions anything about this process is the poem in Gylfaginning, where it states that he begat a son.

English: [Búri] begat a son called Borr, who wedded the woman named Bestla, daughter of Bölthorn the giant; and they had three sons: one was Odin, the second Vili, the third Vé.

He played an important role in bringing the race of Aesir into existence, placing him on top of the family tree of the Aesir, however, there is no more information about Búri in any of the old Norse texts. If he still lives, died, or something in between is only something that we can speculate about.