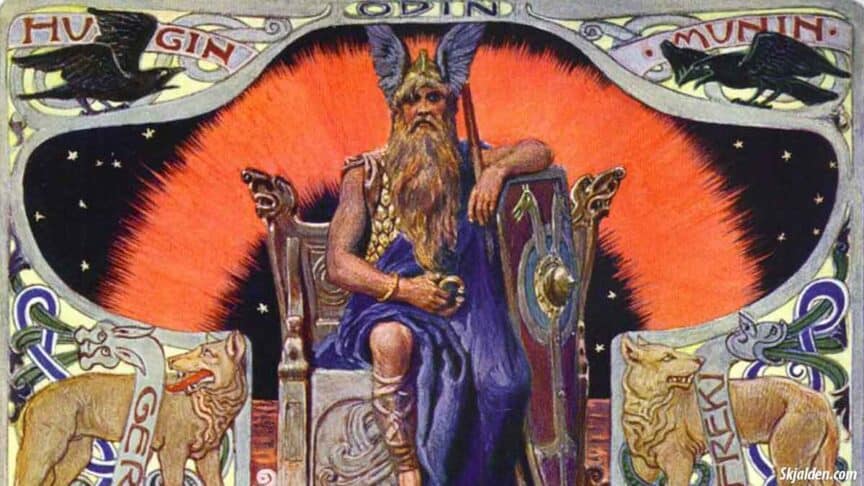 Odin (Old Norse Óðinn) is the most powerful God in Asgard and he is the chief of the Aesir, in Norse mythology. Odin is sometimes called the all-father or the wanderer, he has, in fact, many names, because he has taken many shapes on various occasions. Odin looks like a sorcerer and may have been an inspiration to Gandalf for J.R.R Tolkien’s books Lord of the Rings and the Hobbit.

Odin is associated with healing, death, royalty, wisdom, battle, sorcery, poetry, and the runic alphabet. and he is thought to be “the leader of souls”. The modern word “Wednesday” is named after Odin and it comes from the Germanic word Wotan which means “Odin” so Wednesday is “Odin’s day”. Odin lives in the house called Valaskialf, in this house, Odin has a tall tower and at the top of the tower he has a throne called Hlidskialf, here Odin can see throughout all the nine realms. Odin is the grandson of Buri the first Aesir, and he is the son of the half-God, half-giant Bestla, and Borr.

Odin has two brothers, Vili and Ve, together with his brothers Odin created the world in Norse mythology. Odin is married to the beautiful Goddess Frigg, together they have the sons Baldur and Hod, but Odin also has others sons. Some of the giantesses who live in Jotunheim (the land of the giants) are so beautiful that even Odin could not resist them. So Odin has on many occasions traveled to Jotunheim to be with one of those beautiful giantesses.

Odin is able to shapeshift just like Loki, and he can shapeshift into an animal or human anytime he wants. Odin mostly speaks in phrases and riddles, and Odin’s voice is so soft that all who hear him speak thinks all he says is true. Odin can also just say a single word and he will be blowing out the flames of a fire, or tone down waves of the sea. Odin is seldom active in a battle but when he is, he can make his enemies blind in combat, deaf or horror-struck, Odin can even make their weapons hit like sticks, or make his own men as strong as a bear and go berserk.

Odin can predict the fade of all humans, and see their past, he even knows that one day Ragnarok (Ragnarök) will start and there is nothing he can do to prevent it. Odin also has the ability to travel to remote lands, in his or in the memories of others. Odin can send people to their death or give them an illness. Some Vikings sacrificed to Odin, and gave him good promises, in the hopes to gain insight into whether they could win a battle or not.

Sleipnir (Old Norse “Slippy” or “The Sliding One”) is a gray eight-legged horse, this horse is a magical horse, and the most beautiful of all horses. Sleipnir is the symbol of the wind and has the marks of hell upon it. Sleipnir can just as easily gallop through the air as on land. Sleipnir was born by the Loki when he shape-shifted into a mare and used the stallion of the giant builder to become pregnant. (The giant builder was the one who built the walls around Asgard, the home of the Gods.) Sleipnir was later on given to Odin as a gift from Loki.

Odin has two ravens which are a spiritual part of himself, they are called, Huginn “thought” and Muninn “memory”. Odin sends them out every morning to bring him the latest news from all over the world. They always come back each evening and whisper to Odin what they have heard and seen, when they are not exploring the world, they sit next to Odin on his throne in Asgard.

Geri “the ravenous” and Freki “greedy one” are Odin’s two wolves, Odin always gives them all his food from the table because Odin does not need any food to live, wine is all he wants. When Odin is walking around the streets of Asgard both Geri and Freki will follow Odin.

Odin has a magical spear named Gungnir, this magical spear will always hit its mark and will always kill. Gungnir means “The swaying one” it was made from Yggdrasils Sacred ash, and Odin has carved his secret runes, onto Gungnir.

Odin has a magical golden ring every ninth day eight, new rings will drop out of Draupnir. The eight new rings are of equal quality as Draupnir. The name Draupnir means “the dripper” The ring was forged by the dwarf brothers Brokkr and Eitri.

Loki used a trick to get out of the bet for his head. Since Loki only had bet his head, he said they could only cut off his head, but they were not allowed to hurt his neck, which was not a part of the deal. The dwarf brothers then punished him by sealing his lips with some wire. When Odin’s son Baldur died the ring was placed on the funeral pyre by Odin.

Odin only has one eye that is because he sacrificed one eye to Mimir this is was the price to take a drink from his well, from Mimir’s Well and because of this Odin gained the wisdom of the Mimir, and Odin became the wisest of all the Gods and Goddesses in Asgard. This is because anyone who drinks the water from this well will gain the wisdom of Mimir.

The name Mimir means “the rememberer or the wise one”. Mimir is the one who guards the well named after him, but Mimir has no body he is only ahead, so I guess he will call for help if anyone tries to take a sip.

Odin hung himself on Yggdrasil

One day Odin wanted to learn the secrets of the runes, so Odin stabbed himself with his own spear and hung himself on Yggdrasil “the tree of life” after nine days and nine long cold nights of fasting and suffering. Odin then fell screaming from Yggdrasil, after having had the secrets of the runes revealed to him, but only for a glimpse of an eye. The meaning of the word “runes” is secrets.