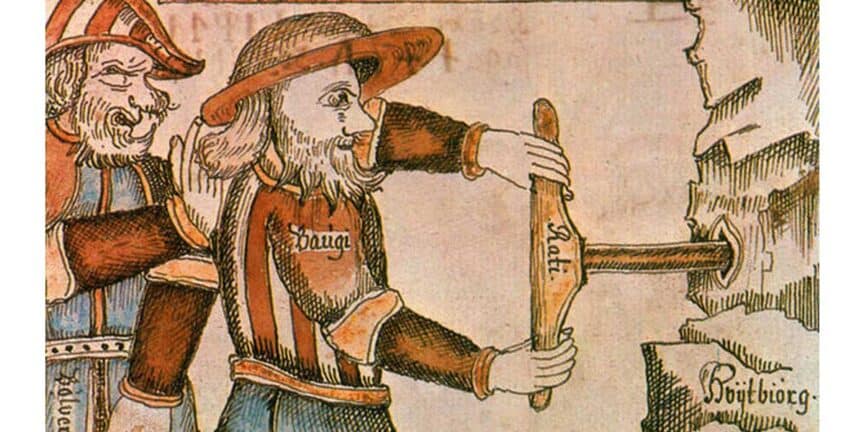 Aegir asked Bragi what is the origin of poetry? Bragi replied, that the origin of poetry is when the Aesir was at war with the Vanir, and the two sides agreed to hold a ceasefire and talk with each other. The two groups reconciled their differences by spitting into a tub.

After the meeting, the Aesir did not want to miss the opportunity to use this symbol of truce, and they took the tub with the spittle back to Asgard and created a man called Kvasir.

Kvasir turned out to be very wise and could answer any question. The Aesir allowed Kvasir to leave Asgard and travel throughout the world. He went from village to village teaching men his knowledge.

One day Kvasir came to Svartalfheim, which is the home of the dwarves. Here he met the two dwarves Fjalar and Galar. They asked him if they could have a private word with him, and Kvasir followed them into another room.

But this was a trick by Fjalar and Galar, and they killed Kvasir. The two dwarves slit his throat and let his the blood flow into two tubs called Son and Bodn, and into a kettle named Odrerir.

They took some honey and started to mix it with the blood, and it is from this mixture of honey and Kvasir’s blood that is called the mead of poetry. Anyone who drinks this mead will become a poet or a scholar.

The two dwarves sent a message to the Aesir saying that Kvasir had choked on his own knowledge because there was no one smart enough to ask him a question that he couldn’t answer.

Since Gilling could not swim, he quickly sunk to the bottom, the dwarves righted their boat and sailed back to land. The dwarves told Gilling’s wife that Gilling had drowned and there was nothing they could have done to help him. She got very sad and cried loudly.

Fjalar then asked her if it would make her feel better if they showed her the spot where Gilling had drowned. While she was sitting and looking out at sea to the spot where her husband had died. Fjalar told his brother Galar to climb up over the door and drop a millstone on to her head. Fjalar said he was tired of hearing her constant weeping and Galar agreed to this.

Many months later Suttung, Gillings’ son heard about his father’s death and how it happened. So he traveled to Svartalfheim and caught the two dwarves. He sailed out to sea and placed them on some rocks that would be covered at high tide.

Fjalar and Galar were scared and begged Suttung for their lives. They told him, about the mead of poetry, and offered him it as compensation for his father’s death. Suttung agreed to this, and he took the mead home with him. When Suttung came home, he hid the mead inside the mountain Hnitbjorg and made his daughter Gunnlod stand guard.

The mead of poetry has many names, it is called Kvasir’s blood or liquid of Odrerir, Bodn or Son, it is also called the ship of the dwarves because it was used as ransom to get them off the rocks. The mead is also called Suttung’s mead or Hnitbjorg’s liquid.

Then Aegir said, it seems to me that calling poetry these names conceal the truth. How exactly did they Aesir get their hands on Suttung’s mead?

Odin and the mead of poetry

Bragi replied The story is that Odin wanted to get the mead of poetry so he traveled from Asgard and came to a place where nine slaves were cutting hay. Odin asked them if they wanted some help to sharpen their scythes, and they said yes. He then took a whetstone that was hanging from his belt and sharpened the blades.

The slaves tried cutting the hay with the newly sharpened blades and they were impressed by how much better it cut the hay, so they wanted to buy the whetstone. Odin said you can give me what you think is a fair price, with that, said Odin threw the whetstone into the air, all the slaves bumped into each other trying to catch it, and as a result, they slit each other’s throats with their blades.

Odin traveled down the road until he came to the home of Baugi, Suttungs brother, here he rested for the night. While sitting at the fire Baugi complained that his wealth had decreased, he said that someone had killed his nine slaves earlier that day and now he had no hope of finding other slaves to do the job.

Odin who had decided to travel under the name Bolverk, and he offered Baugi to do the unfinished job of the slaves if he could get a drink from Suttung’s mead. But Baugi said, I don’t have any control over the mead, Suttung has kept it for himself. But I will travel with you to Suttungs home and see if we both can get a taste of the mead.

Bolverk stayed with Baugi for the rest of the summer, doing the job of the nine slaves. When the first snow started to fall, he asked Baugi for his payment. And they traveled together to Suttung’s home, and at the arrival, Baugi told his bother about his agreement with Bolverk.

Suttung said I refuse to let any of you take a single drop of my mead. Bolverk whispered to Baugi, we should try and trick your brother to give us the mead. Baugi nodded in agreement and Bolverk took out the auger called Rati and told Baugi that he should bore a hole through the mountain.

After a while Baugi came back and said he had bored the hole into the mountain. Bolverk went to the mountain and blew air into the hole and small pieces of stone flew back into his eyes. You have not drilled through the mountain Baugi, continue to drill, and don’t stop before you are done.

Bolverk now blew some air into the hole again, and the small pieces of stone flew inwards. Bolverk shapeshifted into a snake and crawled into the hole, Baugi tried to hit him with the auger but missed him.

Bolverk moved slowly forward until he came out of the hole and was in a room with a female giant, this was Gunnlod, Suttung’s daughter. Bolverk shapeshifted back to his human form and made a deal with Gunnlod, he would sleep with her for three nights, and he will get to take three mouthfuls from the mead of poetry.

After the three days, Bolverk took his first mouthful and emptied Odrerir. With his second mouthful, he emptied Bodn. His third and last mouthful emptied Son, and now he had all the mead inside his stomach.

Odin gave some of the mead of poetry to the Aesir and some to the humans in Midgard which we call poets.

While Odin had flown away from Suttung he had pooped some of the mead of poetry out along the way, and whoever wanted it took it. Anyone who has eaten these bird droppings is what we call bad poets.