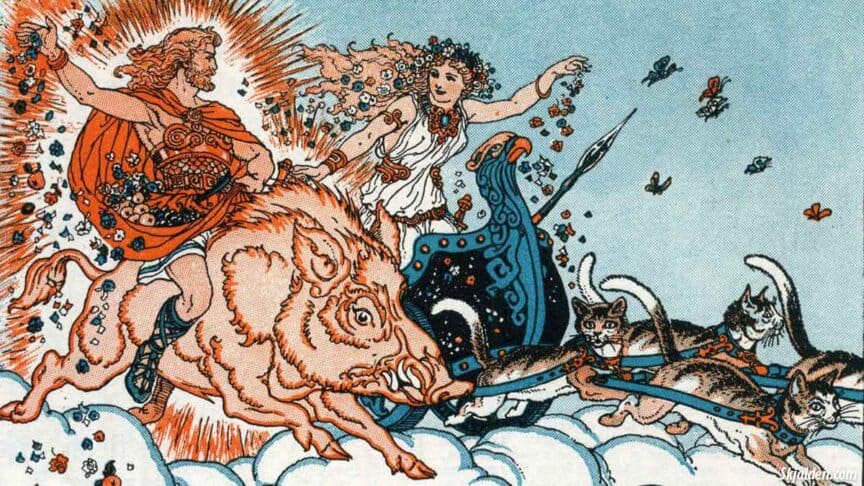 The Vanir is an old branch of gods in Norse mythology, they are associated with health and fertility, and especially sorcery. The word Vanir is plural and Vanr is the singular form, the meaning of the word is unknown, but it could be a synonym for the word god.

The Vanir has their own home among the nine realms called Vanaheim. Unfortunately, there is no source that thoroughly describes this realm. The realm has been described as beautiful, and with their association with fertility in mind, it must be a clean and green place that has lots of trees, plants, and wild animals.

The only known Vanir by name are Njord, Freyr, and Freya, who all were part of a truce between the Aesir and the Vanir after the war between them ended.

The Aesir sent Hönir and Mimir in turn to the Vanir, but when they noticed that Hönir was unable to fulfill his role without constantly consulting the wise Mimir, they decided to chop off Mimir’s head and send it back to the Aesir.

Mimir did not die, Odin was able to preserve his head with the use of magic in a ritual. Odin and Mimir have developed a close bond between them, and Odin often walks around for hours holding Mimir’s head while asking him for counsel.

Another part of the truce was a ritual where all the gods spat into the same tub, and from their saliva, a being who was named Kvasir was created. It is possible that a ritual of spitting into the same bowl could have been a ritual in the Nordic society during the Viking Age or possibly an older tradition to end a conflict. This is only a thought at this point and not something that I have researched.

The truce was of great benefit for the Aesir, it was the Vanir who taught them how to use magic (Old Norse: seiðr). One figure that really should be highlighted in this connection is Freya who by many mostly is referred to as the goddess of love, but she is actually also extremely skilled in the art of magic, it was her that introduced Odin to magic and taught him everything she knew.

At this point the knowledge about the Vanir is very thin, their association to fertility seems to have been worshipped by most people during the Viking Age. Freya and Freyr are prevalent in Scandinavia, particularly in and around Uppsala in Sweden. Freya and Freyr have both been worshipped in connection with the harvest, fishing, and wealth. In addition, Freya was worshipped as a female fertility goddess for those who wanted to become pregnant, and her brother likewise for males who wanted to impregnate a woman.