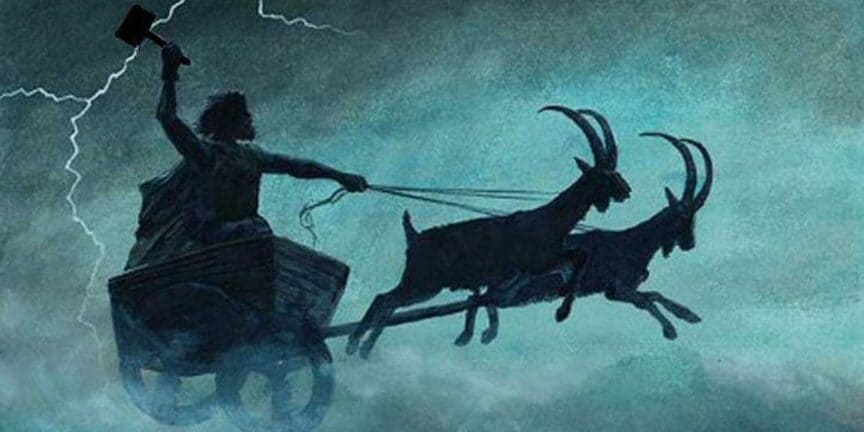 Thor (In Old Norse Þórr) is the almighty God of thunder in Norse mythology, he is the son of Odin and Giantess Fjörgyn. Thor is associated with the day Thursday which comes from the word Torsdag from Scandinavia and in the Germanic countries it is called Donnerstag which means thunder day and comes from the word Donar, which was the name of Thor in the Germanic countries.

The Giants really love to make fun of him and because Thor is very ill-tempered it immediately makes him furious, it often results in Thor grabbing his hammer Mjölnir it hit them over the head, When Thor is enraged, it makes loud noises with sparks and lightning. This makes the giants crumble in fear and sends chills down their spines. Thor loves to fight the giants, and with his hammer Mjölnir, he always has the upper hand.

Thor lives in Asgard together with his wife Sif at a place called Thrudheim, the name means “Place of Might”. It’s an enormous house with 540 rooms, and it’s the biggest house known in Asgard. Thor and Sif live with their two children Trud and Modi, but also a stepson named Ullr who Thor adopted. Thor also has a son named Magni with a giantess called Jarnsaxa. Thor and Sif also have two servants a boy named Thialfi and a girl named Röskva.

Whenever Thor rides out from Asgard in his chariot he has two goats that pull his chariot, their names are Tanngniost “Teeth barer” and Tanngrisnir “Teeth grinder”. People down below in Midgard can hear the loud sounds from the wheels, and see the sparks and lightning from the wheels as Thor flies across the sky.

The people in Midgard call this thunder and lightning. If Thor is going to be away from home for more than a day, he will cook the two goats, but Thor will always revive them with his hammer Mjölnir the next day.

Thor’s hammer was forged by the dwarfs Brokkr and Eitri and it’s one of the most frightening weapons, it can send out lightning bolts and is capable of tearing down mountains and Mjölnir can hit any target. After the target is hit, Thor’s hammer will return to Thor’s right hand all by itself. The hammer can be used to kill and destroy, but also revive people or animals. Thor’s hammer can also be magically shrunken to fit inside Thor’s shirt.

The hammer Mjölnir is also used in sacred ceremonies; it can be ceremonies about birth but also death. Thor also has some other powerful items, like a pair of iron gauntlets and a magical belt, when he wears both of these magical items it makes him twice as strong. The belt is called Megingjord, a “power belt” and the iron gauntlets are called Járnglófar. Mjölnir was once stolen by the Giant Trym, and the price for getting it back was the hand of the fertility Goddess Freya.

The servants of Thor

Their two servants are siblings and the children of a peasant farmer from Midgard. Long ago when Thor and Loki stayed one night at their farm, Thor shared the meat generously with the family from his two goats Teeth-barer and Teeth grinder.

The boy Thialfi broke one of the bones and sucked out the delicious marrow. When Thor resurrected the goats the next morning, he found out that one of the goats was limping on of the legs and Thor became furious. Thor then demanded that Thialfi and Röskva became his servants, and came back with him to Asgard.