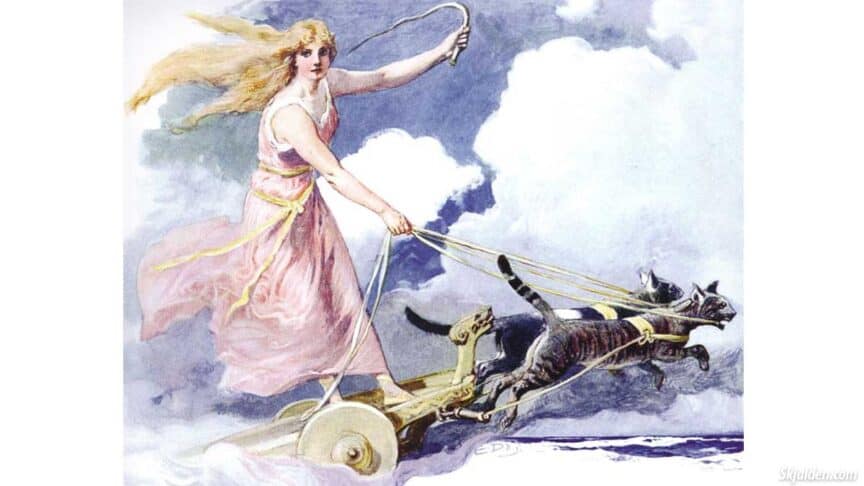 Freya is the goddess of love and fertility in Norse mythology, and she is associated with sex, lust, beauty, sorcery, gold, war, and death. The name Freya means “Lady”, and it can, for instance, also be spelled, Freyja, Freja, Fröja, Frøya.

Freya is not an Aesir, although she lives in Asgard together with her husband Odr (Old Norse: Óðr). She is called an Ásynjur, a female Aesir, but she belongs to the Vanir, an old branch of gods that reside in the realm of Vanaheim.

She, Freyr, and Njord were sent to the Aesir by the Vanir as a token of truce; in return, the Aesir also sent two Gods to the Vanir. Freya became an honorable member of the Aesir after the war between the Aesir and Vanir ended.

She is the daughter of Njord (Old Norse: Njörðr), who lives next to the sea in his great hall Nóatún. Her mother might be an unknown sister of Njord, however, there is no definitive documentation that either confirms or denies it. Her twin brother Freyr is also a Vanir, but he lives in the realm of Alfheim, which was given to him as a gift by the Aesir.

Freya and her husband are the parents of Hnoss and Gersemi, the meaning of both names is treasure or something that is considered precious or valuable. They are referred to as the beautiful daughters of Freya and Odr, however, nothing else is known about them, they are only mentioned as their children in Gylfaginning, which is the first part of Snorri Sturluson’s Prose Edda.

According to the Prose Edda, her husband is missing, which often makes her go out searching for him while weeping. The tears that fall on the ground turn into gold, while the tears that fall into the sea turn into amber, and for that reason, amber is referred to as Freya’s tears.

Freya is a very important goddess in Norse mythology, probably more than people realize, she is, according to Snorri, the highest of the Asynjur, and one could argue that her status is almost on par with Odin.

It was Freya who taught magic (Old Norse: seiðr) to Odin and the rest of the Aesir, previously it was only practiced by the Vanir. She and her father have also been appointed the high priest and priestess of sacrificial offerings.

It is not Odin, but Freya who has the first pick among all of the people who die in battle, she chooses half, for her great hall Sessrúmnir, on the field of Fólkvangr, the rest will go to Valhalla.

Hollywood actors can scream “Valhalla” all they want, before charging into battle, but in reality, if someone is brave and handsome, they would probably end up in Freya’s hall. However, some scholars have in recent years proposed that Fólkvangr might be another name for Valhalla.

Three animals and some feathers

Freya loves to travel, and she has various options to choose from, the most famous one, is probably her chariot pulled by two black or gray cats. She can also choose her cloak of falcon feathers from her wardrobe. This cloak is magical, and it allows her to fly anonymously through the skies, and observe what is happening on the ground.

The cloak is not a secret, many others know about it, and she willingly loans it out to the other gods and goddesses in Asgard, when they need to fly to one of the nine realms in a hurry.

It was also this cloak that the trickster Loki borrowed when he had to travel to Jötunheim to rescue the goddess Idunn. On the way back, Loki was chased by the eagle Thiazi who failed to grab Idunn from his claws. This may sound like a brave and selfless act, but Loki was the reason in the first place that she was kidnapped.

Freya’s third option to travel the realms is her boar Hildisvíni (battle swine), which she rides when she is not using her cat-drawn chariot. Loki has made up a story, that the boar is really her human lover Óttar in a disguise, and therefore he constantly accuses her of being immoral by riding her lover in public.

This actually is true, in the poem Hyndluljóð (The Lay of Hyndla), she casts a spell on Óttar turning him into a boar. The poem is about helping Óttar prove his ancestry, so he can claim his inheritance, she rides the boar, and the Völva that is helping them rides her wolf.

At Aegir’s feast, Loki asserted that she had been the lover of each and every god and elf in the hall, when she objected to Loki’s claims, he called her a spiteful witch and continued saying she also had been together with her own brother. At this point her father Njörðr finally interjected and called Loki a pervert for having brought his horrible children into the world.

It is no secret that Freya is incredibly beautiful and she does have many admirers, not just among the gods, but also among the elves, dwarves, and jötnar (giants). For example, when the unnamed builder offered to build the walls around Asgard that would be so tall and strong that no jötunn (giant) ever could penetrate it, he wanted Freya as the bride for his payment.

Or in the Skáldskaparmál, when Hrungnir had become so drunk, that he began to boast that he would kill all the gods and goddesses, except Freya and Sif, destroy Asgard, and move Valhalla to Jötunheim.

If there is something that Freya really loves, then it is jewelry and other fine accessories and materials, she has quite often used her beauty to get what she wants and the jewelry she desires.

For instance, one of her most prized possessions is the necklace Brísingamen, a name that literally means a fiery or glowing necklace, so it’s probably a stunning piece of jewelry.

According to a short story in Sörla þáttr, the necklace was neither a gift nor something she bought. One day when Freya was walking past an entrance to a cave, where dwarves lived. She saw four dwarves in the process of crafting a golden necklace, and it was nearly done.

Freya offered to purchase the necklace, and she offered them large sums of silver and gold, but the dwarves said they had plenty of valuables. They would only trade it, on the condition that she spent a night with each of them, which she agreed to.

Referring to Freya as an innocent goddess is an understatement, she has more in common with a party girl. Her association with fertility is not rooted in agriculture, but in lovemaking, and conceiving of children. She is most likely the female counterpart of fertility while Freyr is associated with male fertility.

We know that Freya was very popular in Scandinavia, and many places have been named after her, for instance, many farms in Norway have the name Frøy in the first part of the name, i.e. Frøyland. Another example is the farms with the name Frøyjuhof (Frejya’s hof) in Hole a municipality in Viken, and Stjørdal a municipality in Trøndelag.

It’s not just in Norway, the same pattern can be seen across Scandinavia, i.e. Frølund and Frøbjerg in Denmark, and Frölunda and Frötuna in Sweden.

During the Christianization of Scandinavia, many pagan names were replaced with Christian names, i.e. the common milkwort (Polygala vulgaris). This plant used to be called Freya’s hair, but it was renamed after the Virgin Mary.

There is a lovely country it stands with broad beech-trees, near the salty eastern shore It bends itself in hill, valley, its name is old Denmark and it is the hall of Freya.

It is possible that Freya and Frigg were one and the same goddess in the past, it is a fact that they have many similarities, for instance, both of them have been credited for having the weekday Friday named after them.

If you ask a Native English speaker they will probably say that the day is named after Frigg, unlike someone from Scandinavia that will say it’s after Freya. This is probably because in English the day Friday looks a bit like the name Frigg, while in Danish, Norwegian, and Swedish, the day is spelled Fredag, and looks like Freya.

However, just to add to the confusion as to which goddess this day is named after, the Norse sources mention both, Freyjadagr (Freyja’s day) and Frjádagr (Frigg’s day).

Among the Proto-Germanic peoples, Frigg (Frijjō) is attested as being a fertility goddess, and Friday is also named Freitag in German. There does not seem to be any goddess or similar goddess by the name Freya in Germanic mythology, and, therefore, she is probably exclusively associated with Scandinavia.

Their names do not have the same meaning either, Frigg literally means “beloved”, while Freya means “Lady”. During the Viking Age, a woman who was a property mistress was referred to as “Freyja” (the lady of the house).

Freya and Frigg have both been mentioned as a Völva, for instance, at Ægir’s feast in the Lokasenna, Loki accused Frigg of having been unfaithful with another man, which prompt Freya to warn him that Frigg knows the fate of all beings, and her ability to perform seidr (Old Norse: seiðr).

Odin is also described as being a shapeshifting wanderer traveling the realms, his long journeys and his absence from Asgard could also indicate him as her husband.

There is no definitive proof that can neither confirm nor deny if they are identical or not, it all comes down to how the old Norse texts are interpreted by the individual.