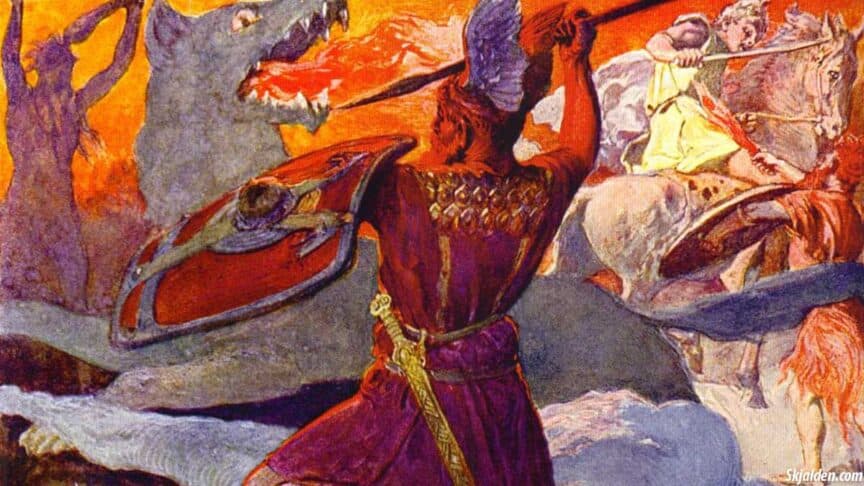 The Vikings believed that one day the world as we know it would come to an end, they called this day for Ragnarok, (old Norse Ragnarökr). Ragnarok is not only the doom of man but also the end of the Gods and Goddesses. It will be the final battle between the Aesir and Giants. The battle will take place on the plains called Vigrid.

It is here that the mighty Midgard serpent will be emerging from the sea, while it splashes its tail and sprays poison in all directions, causing huge waves crashing towards the land. Meanwhile, the fire giant Surtr will set Asgard (the home of the Gods and Goddesses) and the rainbow bridge Bifrost on fire. The Fenrir wolf will break free of his chains and spread death and destruction. The sun and the moon will be swallowed by the wolves Sköll and Hati, and even the world tree Yggdrasil will shake the ground.

Odin will die at Ragnarok

Who kills Thor at Ragnarok?

Thor will fight the Midgard Serpent and kill it, but he will die of the poisonous wounds left behind by the Midgard Serpent. Freyr will be killed by the fire giant named Surtr. Finally, Surtr will set all the nine worlds on fire and everything sinks into the boiling sea. There is nothing the gods can do to prevent Ragnarok. Odin’s only comfort is that he can predict that Ragnarok, will not be the end of the world.

The signs of Ragnarok

There will be some warning signs if Ragnarok “the end of the world” is coming. The first sign is the murder of the God Baldr, the son of Odin and Frigg which has already happened.

The second sign will be three uninterrupted long cold winters that will last for three years with no summer in between. The name of these uninterrupted winters is called “Fimbulwinter” during these three long years, the world will be plagued by wars, and brothers will kill brothers. The third sign will be the two wolves in the sky swallowing the sun and the moon, and even the stars will disappear and send the world into great darkness.

How does Ragnarok begin?

Heimdall will blow his horn as loud as he can and that will be the warning for all the einherjar in Valhalla that the war has started. This will be the battle to end all battles, and this will be the day that all the Vikings “Einherjar” from Valhalla and Folkvangr who had died honorably in battle, to pick up their swords and armor to fight side by side with the Aesir against the Giants.

The Gods, Baldr, and Hod will be returned from the dead, to fight one last time with their brothers and sisters. Odin will be riding on his horse Sleipnir with his eagle helmet equipped and his spear Gungnir in his hand, and lead the enormous army of Asgard with all the Gods and brave einherjar to the battleground in the fields of Vigrid.

The Giants will together with Hel, and all her dishonorable dead, sail in the ship Naglfar, which is made from the fingernails of all the dead, sail to the plains of Vigrid. The dragon Nidhug will come flying over the battlefield and gather as many corpses for his never-ending hunger.

A new earth rises from the sea

When most of the Gods had perished in the mutual destruction with the Giants, it is predetermined that a new world will rise up from the water, beautiful and green. Before the battle of Ragnarok, two people, Lif “a woman” and Liftraser “a man”, will find shelter in the sacred tree Yggdrasil. And when the battle is over, they will come out and repopulate the earth again.

Several of the Gods will survive, among them Odin’s sons Vidar and Vali and his brother Honir. Thor’s sons Modi and Magni will inherit their father’s hammer Mjölnir.

The few Gods who survive will go to Idavoll, which has remained untouched. And here they will build new houses, the greatest of the houses will be Gimli, and will have a roof of gold. There is also a new place called Brimir, at a place called Okolnir “Never cold”. It is in the mountains of Nidafjoll.

But there is also a terrible place, a great hall on Nastrond, the shore of corpses. All its doors face north to greet the screaming winds. The walls will be made of writhing snakes that pour their venom into a river that flows through the hall. This will be the new underground, full of thieves and murderers, and when they die the great dragon Nidhug, is there to feed upon their corpses.