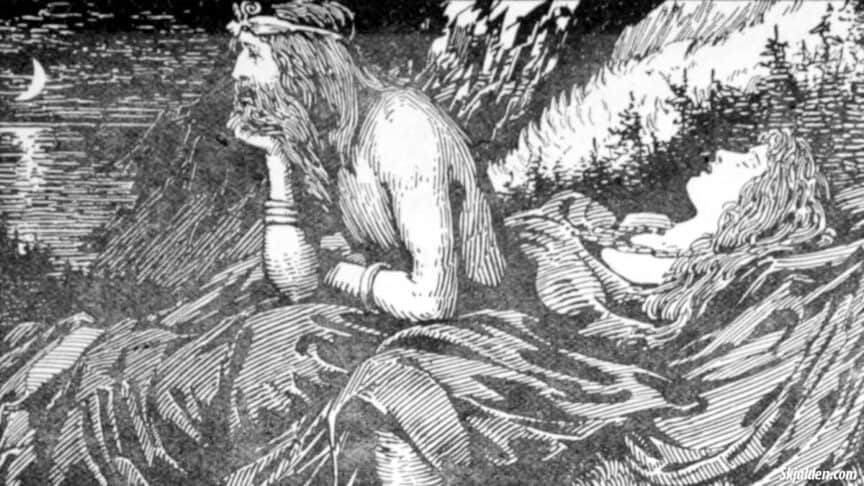 Njord (Old Norse: Njörðr) is primarily the Vanir god of the wind, seafaring, fishing, and hunt, but he is also associated with fertility, peace, and wealth. He lives in Asgard in a house named Nóatún (Ship-enclosure) which is right next to the sea. This is most likely his favorite place, he can listen to the waves all day and night, and enjoy the fresh salty wind from the sea.

Njord is married to the jötunn Skadi, she fell in love with him after seeing his feet beneath a curtain. Because they could not agree where to live, they decided to live separately, therefore, his wife lives in the snowy mountains in Jötunheim.

He has two children, Freya and Freyr, not together with Skadi, but with his sister with an unknown name according to the Poetic Edda by Snorri Sturluson.

Njord has been a very important deity throughout Scandinavia, many areas and towns have been named after him. For instance, the suburban district Nærum north of Copenhagen means Njords home (Nóatún).

According to the Roman historian Tacitus who wrote the book Germania approximately 100 years after the birth of Christ. He describes a Germanic female fertility goddess named Nerthus (Nerþuz) who is associated with love and marriage.

He writes; they have a ritual where they use a wagon pulled by cows, the wagon is covered with blankets, and here sits Nerthus.

She drives around and visits the people, and in this period there is holy peace. At the end of the procession, the wagon, blankets, and the goddess is washed at a nearby lake. This service is performed by slaves, who at the end of the ritual is swallowed by the lake.

It is possible that Nerthus is the female counterpart of Njord, the two deities have many similarities. Tacitus could also have misunderstood Njord’s gender and thought he was a female since his name literally means earth as in soil/land, which often is associated with a female, for instance, the term, mother earth.