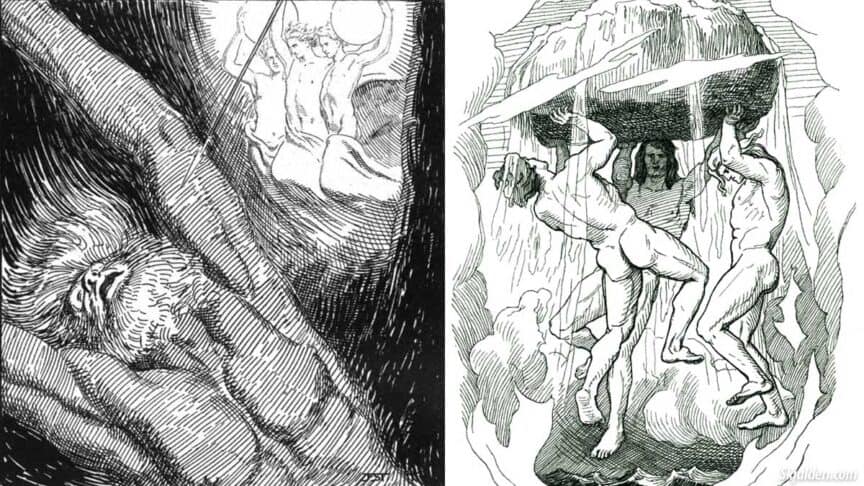 In Norse mythology, Vili and Vé are the two brothers of the god Odin, the name Vili means (will), and Vé means (the holy).

The three brothers are the sons of Bestla and Borr, and they were raised in the realm of Niflheim, a barren place with nothing to eat or drink besides the milk from the primeval cow Audhumbla.

At the beginning of time, when only the land of fire (Muspelheim) and the land of ice (Niflheim) had been formed out of the great void of Ginnungagap, the resources were very scarce. The three gods, Odin, Vili, and Vé had become tired of watching the greedy jötunn Ymir laying on his back all day while drinking the warm milk from the cow, so they decided to kill him.

A dreadful battle took place, but in the end, the brothers were victorious. They used the body parts of Ymir to create the remaining seven realms, Asgard, Midgard, Jötunheim, Vanaheim, Alfheim, Svartalfheim, and Helheim.

As time passed in this big and empty world, the three gods must have grown bored, and one day when they walked along the beach together they found two trees and decided to turn them into living creatures.

These became the first humans in Norse mythology, and their names were Ask and Embla. Odin gave them life and breath, Vili gave them consciousness and movement, and Vé gave them a face, speech, hearing, and sight.

Vili and Vé are most likely also called Hönir (Old Norse: Hœnir) and Lothur (Old Norse: Lóðurr), because the same story, but with different names is mentioned in the poem Völuspá from the Poetic Edda.

According to Snorri Sturluson in the Ynglinga saga, Odin’s two brothers are briefly the rulers of Asgard, including having the right to his wife Frigg, something that Loki teased her within the Lokasenna poem.