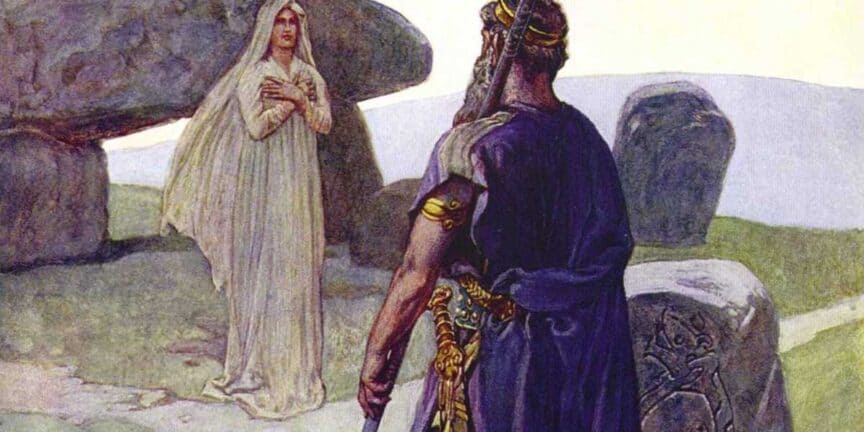 A Völva or as it is pronounced in old Norse a Vǫlva (in Danish a ”Vølve”), is what we in English would call a Seeress. You could compare it to someone who practiced shamanism or witchcraft. So a Völva is a Nordic version of a shaman or witch, that practiced magic. The Völva in the Viking age were the predecessors of the medieval witches, so you could say, they were witches before it became cool. A Völva is not something that just dates back to the Viking age, a Völva is, in fact, very ancient, and their roots go back more than 2.000 – 3.000 years.

Continue reading below or watch the video, to learn the true definition of a Völva/Vǫlva (The Old Norse Viking Witch)

What is a Völva

A Völva was a woman in the Viking age who practiced magic, known as Seidr (in old Norse seiðr), the word Seidr literally means ”to bind”. A Völva often had a very special role within the society and would often have close ties with the leaders of her clan. You could call a Völva/Vǫlva a spiritual leader or healer in the Nordic society. A man could also practice Seidr, and he would be known as a Seer, but that was very rare.

A man that practiced Seidr (Magic, in old Norse, is called seiðr) was seen down upon and called unmanly. This might have been because the Seer and Seeress both wore the same outfit. For instance one of the worst insults a man could get in the Viking age was to be called unmanly or a Völva.

A Völva wore colorful dresses, which as I said before would probably have been the same for both male and females. She would also wear gloves and a hat made from cat fur, and have a beautiful decorated staff or wand. The staff or wand was an important accessory in the carrying out Seidr.

The people were afraid of a Völva because she possessed a lot of power and the knowledge of magic. A Völva would not always live a long life, the practice of magic was dangerous and moving back and forth between dimensions/realms, had many unforeseen consequences. But her death could also be caused by her own clan if they did not like her prophesies.

A Völva could talk with spirits

A Völva could put herself into a trance, were she could to talk with the spirits around her, the Völva herself or someone else mostly young girls at the ritual would sing a song, for the spirits to the sound of drums, the purpose of the song was to lure or attract the spirits to their ritual.

When the sound from the drums and song slowly began to fade, the Völva would be between the realms of the living and spirits, the participants in the circle attending the ritual would now be able to go and ask her questions about their fate and their future, one by one.

A Völva was also able to leave her own body and enter into an animal, it is uncertain how or why she would do that, but it might have been to travel great distances, for instance to another town or place to observe and gather knowledge. The practice of Seidr was mostly used to do good and help the people, and Seidr was not just used in rituals to contact the spirits, it was also used on daily basis, it could be used to heal wounds, create happiness or to control the weather.

A Völva would sometimes travel from town to town or farm to farm, and help the people, by predicting their fate or conducting a ritual that would give them a better harvest. She would probably be paid in silver, food or other necessities or luxury goods.

Black magic in the Viking age

Seidr was practiced by the Gods and Goddesses

Seidr was not just something that the Völva practiced, it was also practiced by the Gods and Goddesses, but the knowledge of Seidr does not originate from the Aesir. The use of magic derives from the Vanir and they are seen as masters of sorcery. The Vanir are so talented in the use of Seidr, that they are able to hide their realm, which is why we do not know how their world looks like.

Odin is seen as the master of Seidr, but Odin and the rest of the Aesir were taught the practice of magic by Freya, she is a Vanir by blood. The jötnar, also known as giants learned the practice of Seidr but it is unclear how they obtained that knowledge, but it can be read in the sagas that some of them know how to use magic. For instance, the jötunn Skrymir is a master of illusions, and uses this form of magic against Thor and his travelers in Thor’s journey to Jotunheim.

A Völva was powerful, as in really powerful, even the God Odin, asked a Völva for advice on many occasions. It was a Völva in the poem Völuspá (Old Norse Vǫluspá) that told Odin about the inevitable end of the world, known as Ragnarok (Ragnarök). For those of you who do know about the worldview of the heathens will, of course, know that Ragnarok is not really the end of the world.

Ragnarok will lead to massive extinction of every living species on the planet, including most of the Gods and Goddesses, it will however not be the end. The Vikings if I may call them that, believed that the time moved in circles, so from Ragnarok a new world will be born, which will be more green and prosperous, than the old, our current world.

In Denmark at the peninsula of Jutland in 1954 at the ring fortress Fyrkat, there was found a grave that belonged to a former Völva, that dates back to around the 9th century, which is in the early Viking age.

Description of a Völva

The Völva that were found her at Fyrkat, was wearing a long blue and red dress, with long white sleeves and a headscarf with a gold thread along its edge. She wore toe rings made from silver, which is very unusual and there hasn’t been found something like this before in Denmark, or elsewhere in Scandinavia. The Völva was buried on top of a horse-drawn carriage, it is not the one here in the image, but it is just to get you a visual image of it, and how it might have looked.

The Völva was buried with a gold plated box brooch made from silver, which contained white lead which is a white powder from a plant, the box brooch is believed to be from Gotland. This white lead has been used in Europe for more than 2000 years in medicine, and it is poisonous in its concentrated form and if you don’t know what you are doing it can be lethal. It is also possible that she also used the white lead as make-up, perhaps in her Seidr rituals.

The archaeologists also found a metal wand, this wand was probably used in her many Seidr rituals to help her carrying out Seidr, or for roasting marshmallows in the fireplace, (just kidding).

She had a small purse with seeds from the poisonous henbane plant. This plant will cause hallucinations, and it could have been part of her rituals, or even have been given to the warriors before a battle. Henbane is known to most people today who practice witchcraft, it is referred to as a witch’s salve, you rub it on your skin to get the psychedelic effect.

Some of the other objects that were found at her feet were owl pellets and animal bones from birds and mammals. There was also a silver amulet which was shaped like a chair, could this be a small model of her Seidr chair, where she practiced her magic?

Next, to her, she had two bronze bowls, which the archaeologists believe are from somewhere in central Asia, these bowls might have been used for mixing the ingredients when she made potions or some of her other Völva recipes. There were some potions next to her, but the mixtures could not be identified.

There has in the recent years been speculations that she might have been Harald Bluetooth‘s (Harald Blåtand) Völva and traveled around Denmark with Harald and his warriors. Which means she would have lived in around the year 958 to 987. The reason why some archaeologists think that this could be a possibility because they have found a silver fitting that has almost identical ornamentations as the box brooch from Fyrkat.

If this is true, she would have traveled great distances, because the Viking fortress at Fyrkat and the Viking fortress at Køge are 320 kilometers apart, which is about 200 miles for my American friends. The two objects have not been analyzed yet, so it is uncertain if the silver fitting was part of the box brooch from the Völva burial. It would, however, be very cool if the archaeologists accidentally found the grave of Harald Bluetooth’s Völva.

Völva burials are not uncommon

Völva burials have been found all over Scandinavia, and quite a few were found wearing clothes or had items next to them of significant value, which suggests that they were considered important and of high status, or at least a higher status than a normal peasant. We also have descriptions from other sources about the Völva and her ritual practices, for instance, the diplomat Ibn Fadlan, mentions a Viking ritual when he observes a Viking funeral at the Volga which is part of present-day Russia.

There are still people who practice Seidr today

While you might think that a Völva is something from the past, it is not necessarily true. There are still some who practice Seidr and see themselves as a Völva. If you visit some of the local Viking markets in the summer in Scandinavia, you may be lucky enough to see one of them. If a modern Völva is a master of Seidr, that is something for you to decide.