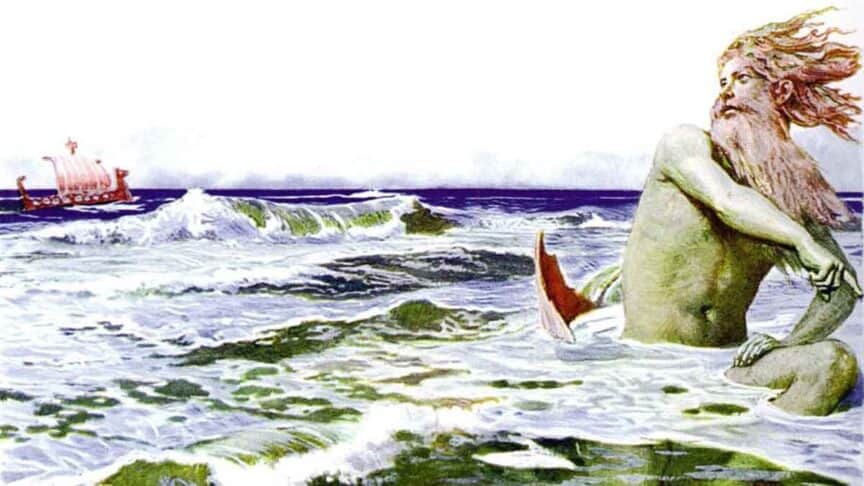 In Norse mythology, Aegir and Ran are a married couple that lives under the sea. Ran is a sea goddess, and her husband Aegir is a jotünn, and together they have nine daughters who all are named after the waves of the sea.

Ran (Old Norse: Rán), whose name means robbery, loves to spend her day catching and dragging drowning sailors with her huge fishing net down into her realm on the bottom of the sea.

This is the same fishing net as the trickster Loki once borrowed because he wanted to capture the dwarf Andvari who had turned himself into a pike (a fish).

Aegir also spelled Ægir which means “sea” in Old Norse, is not a sea god, but he is a jötunn. Even Though Aegir is a jötunn (giant) the couple has befriended the Aesir, they are actually very well-liked among them, and they are often invited to the feasts in Asgard.

Aegir and Ran are often the hosts of the feasts themselves, and they send out invitations to the Aesir to visit them in their great hall in their underwater realm. The Norse gods never decline an invitation, they love to come and visit and drink the beer that Aegir brews.

For you see, Aegir is very well-known for his astonishing beer throughout the nine realms. He might be using his magic (Old Norse: seiðr), as his secret ingredient when he is brewing the beer in his huge cauldron.

His immense knowledge in the art of magic is known among the Aesir, probably one of the reasons why Odin wants to be around him. Odin does not come to the feasts for the beer, he only likes wine, but he probably comes to learn some of Aegir’s magic.

In the Viking age, sailors would sometimes pay tribute to Ran before they would embark on their journeys to raid or trade. They hoped that these treasures would please her and that she would grant them safe passage at sea.

There have been found some examples of these offerings at Tissø in Denmark, for instance, weapons and jewelry. However, we can never be certain that they were sacrifices to Ran, but it is a possibility.