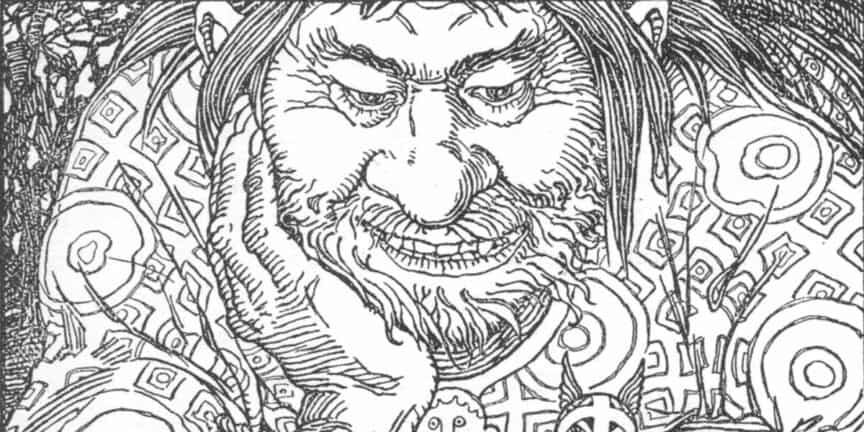 The giants and giantesses were among the first living beings according to the creation of the world in Norse mythology. The first giant was called Ymir, and it is from his corpse that the nine realms were created.

The word giant is actually misleading, and the reason they are called giants in English is probably because of the French influence on the English language. After William the Conqueror had led the Normans to victory in 1066 CE, many new loanwords were introduced into the English language, and one of them was the word “geant”, which became “giant” in English. It is possible that this was how the word jötnar was replaced with the word giant.

In Old Norse, a giant (singular) is called a jötunn, (plural) they are called jötnar/jǫtnar, also spelled (singular. þurs), (plural. þursar). These two definitions can be used regardless of gender. A giant can be divided into additional groups, for instance, frost giants (hrímþursar), and mountain giants (bergrisar).

The word jötunn may originate from the Proto-Indo-European word etunaz (etaną), which means “to eat”, as in devourer (Modern German: vielfraß). This word is not meant to be used in a positive way, it is used to describe someone that is overeating. Because of the huge size of a giant and the enormous food it could consume every day, it quickly earned the name devourer by the Aesir.

It was the sight of these jötnar stuffing their mouths greedily in the beginning of time that annoyed Odin and his two brothers Vili and Vé, in fact, it annoyed them so much that they decided to kill Ymir. The three Aesir wanted to kill them all, but out of sheer luck, some of the giants managed to escape their doom.

The giants eventually made a home for themself, at a place they called Jotunheim (The land of the jötnar). This place consisted of big areas where nothing could grow, which made it impossible for them to plant any crop. However, there were also big dense forests throughout the landscape, and it was from here they got their food by hunting the beasts and fishing in the lakes.

The relationship between the Aesir and the giants is always tense, and the sagas are filled with stories of theft, deception, and broken promises. But it is only in sagas with Thor present where there is a chance of a fight. Thor really hates the giants, he considers them his mortal enemies, and he will never back down from a fight.

The Aesir is in a constant battle with the giants, and it is not always that the outcome of a situation is in the favor of the Norse gods. For instance, it was Loki who was the cause of Baldr’s death.

When Thor and Loki spent the night at a poor farmer’s house in Midgard, Loki manipulated the boy Þjálfi to break one of the bones from Thor’s goats causing it to limp when it was revived the next day.

When Thor visited Utgard-Loki in Jotunheim the giant used illusions to make a fool out of Thor and his travelers, for instance, he tried to make Thor lift Jörmungandr by using magic to disguise it like a cat. But when Thor managed to lift one of its legs it struck a tremendous amount of fear into the hearts of every giant that was present.

The giants and the Norse gods have on multiple occasions interbred resulting at times in a confusing relationship between the two factions. While there is love between some of their members at times, the Aesir always tries to block the marriage or tries to trick them into picking the wrong guy. For instance, when the giantess Skadi (Old Norse: Skaði) demanded to get married to Baldr in compensation for the death of her father Thiazi.

The giants have always been seen as the lesser of the two branches, even though they can both track their lineages back to the beginning of time. We should also not forget that the Aesir derives from the giants, maybe that is one of their reasons for their hatred.

The strength of the giants is growing every single day, they get stronger, their army gets bigger, and one day this struggle for power will lead to Ragnarök. This will be the day when the giants finally will get their revenge for the death of their ancestor Ymir. Ragnarök will not be the end of all life, but it will be a great reset of power.

The giants and giantesses were never worshipped by anyone in the past, and they are not seen as deities in Asatru (Icelandic: Ásatrú), which is a modern name for this ancient religion. Therefore, Loki, who is half-giant and half-Aesir, was never worshipped and is still not worshipped within the Ásatrú community, and contrary to some popular belief Saturday was not named after him.

Seeing the giants as the incarnation of evil, can also not be further from the truth. Rather, they are representatives of the wild and untamed nature, and like the life-giving and destructive nature, they could therefore be both helpful and harmful to humans and the gods. The description of their realm also underlines this, a huge barren landscape surrounded by dark forests full of wild beasts.

The two opposites, good and evil, were not necessarily a Nordic trait prior to the introduction to Christendom. They were pagans, and they were connected to nature which they worshipped in the form of gods and goddesses. There is also no such thing as good or evil in nature, is it evil if a bird eats a worm? or is it evil when a wolf eats a bird? If they don’t eat, they starve. Nature is chaotic, destructive, and harsh, but also beautiful and full of life and joy. The Nordic people were connected with nature, while the people of the south were connected with the holy trinity.