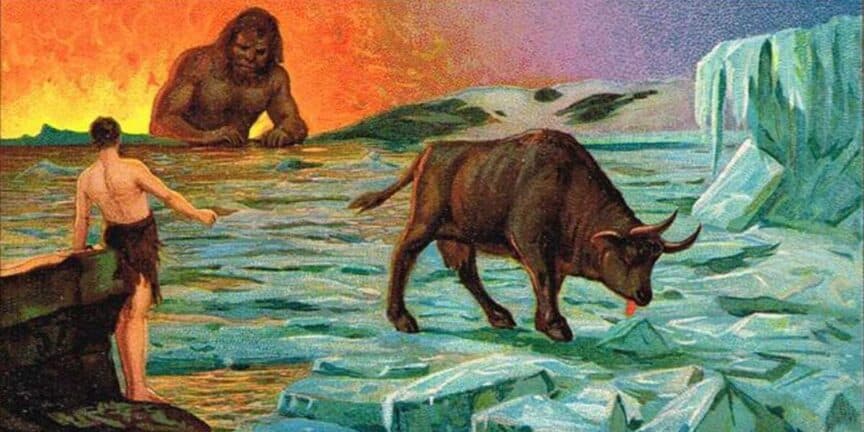 In Norse mythology, Ymir was a primeval being that existed before any of the Aesir gods. It was at a time when everything as far as the eyes could see was made from ice and snow.

Ymir was created when the hot air from the land of fire (Muspelheim) met the icy rivers of Élivágar in the middle of Ginnungagap. The ice melted, and from it, a being came into existence. This being is the ancestor to all the jötnar (giants), and every single jötunn (singular) is descended from him.

Ymir was an enormous frost giant, and much larger than any of his descendants. He spent most of his time drinking the warm and delicious milk from the giant cow Audhumbla. Nothing seemed to satisfy his hunger, feeding on the cow’s udder was everything he wanted to do.

While he was slurping greedily on the udder, the cow Audhumbla had uncovered another being by licking on one of the salty rime rocks, it was Búri, the ancestor of all of the Aesir.

The beginning of the world in Norse mythology was a strange time if it was Seidr (magic), or the will of nature is simply something we do not know, but from the armpits of Ymir, two new beings were formed, a male and a female. Ymir’s legs also bred with each other, and from it, a six-headed being came into existence.

The three gods, Odin, Vili, and Vé hated the jötnar, especially the greedy, noisy, and slurping Ymir, so they decided to make a plan to get rid of him. This was a risky move by the Aesir because the frost jötunn was big, strong, and dangerous, so they had to be extremely careful.

When the time was right, they attacked, a long and horrendous battle took place, if they fought for hours, days, or even months, no one knows, but in the end, the gods stood victorious over Ymir’s lifeless body.

The three gods used his flesh to create the world, the blood became the ocean, the bones became the mountains, the hair became the trees, the brain became the clouds, the skull became heaven, and the eyebrows became the realm of Midgard, the home of man.

While the three gods created the world, the corpse began to rot, and from the flesh, small maggots began to appear, these became the dwarves.