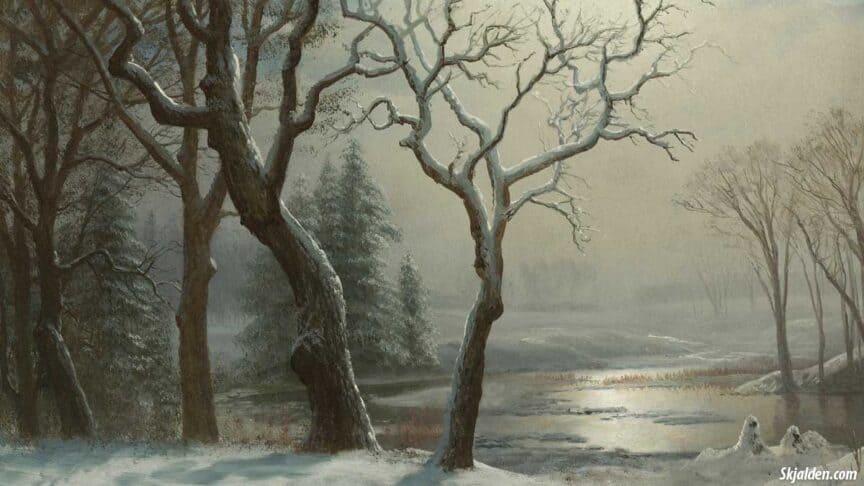 Skadi (Old Norse: Skaði) is a jötunn and the “Goddess” of hunt and skiing. Her main weapon is the bow, which she uses to hunt for animals in the snowy mountains. She is sometimes referred to as the snow goddess or snowlady.

Scholars have argued that the similarities between Skadi and the god Ullr, could mean that they are sisters.

Skadi is the daughter of Thiazi, who died at the hands of the Aesir, which resulted in her getting married to Njord as compensation. It was the trickster Loki that was responsible for her father’s death, which has left her with a deep hatred for him. It was Skadi that placed the venomous snake above Loki’s head when he was placed inside a cave as punishment for Baldur’s death.

She lives in the great hall Thrymheim in Jötunheim (the land of the giants), she could simply not stand the sound of the waves from the ocean, the screeching of the gulls, or sleeping on the sea beds at Njord’s hall next to the sea-side in Asgard.

Skadi missed the sight of the mountains, the cold air on her face, and the howling of the wolves in the night.

It was not the Aesir that chose Njord as her husband, it was herself. The gods gave her the chance to pick among all the bachelors in Asgard. But because they were worried about her picking Balder, she was only allowed to pick her coming husband by looking at their feet.