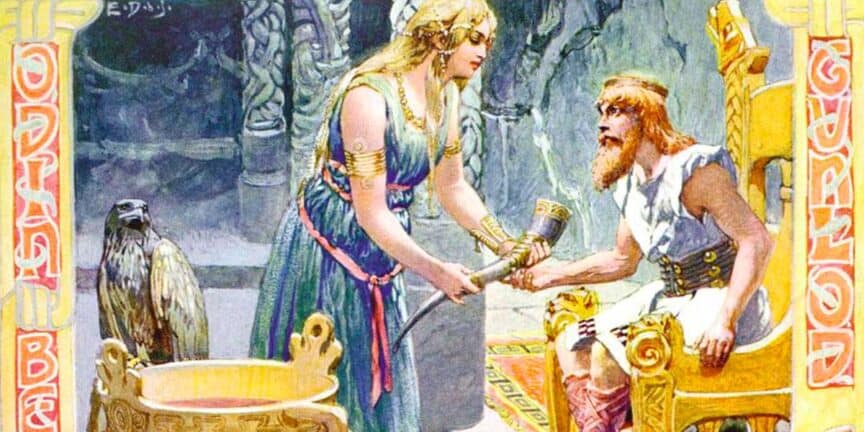 The Vikings loved to drink alcoholic drinks, and not only did they brew their own Viking mead, beer, and ale they also imported wine from areas such as Francia (”France”). Mead was not cheap to brew, and it was certainly not an everyday thing for the Vikings unless they had the silver for it. Mead was most likely only for special occasions such as rituals and feasts.

The oldest alcoholic beverage in the world

Mead is the oldest alcoholic beverage in the world, and its popularity has been steadily increasing in recent years, and the series Game of Thrones, which first aired on April 17, 2011, might have had an influence on its revival. Mead was the favorite drink for many of the Vikings, and they even had entire buildings dedicated to it, known as mead halls.

Mead is known in many parts of the world and is not just something that the Vikings knew about. We do not know where exactly mead originates from, but there has been found archaeological evidence from both Europe and Asia. Mead can be traced back more than 10.000 years, so it has been popular for a very long time, even though it has not received the proper attention in many years.

Mead (”Old English: medu, meodu”), (Old Norse mjöð), (”Danish: Mjød”) is an alcoholic beverage made by fermenting honey, water, and yeast, and if you want more flavors, you can just add different herbs, fruits, grains or spices, so you can tweak it to your liking. Mead typically has an alcohol percentage between 8% to 20%, so just like beer and wine, you can get a mild or strong bottle of mead.

When I hear people talk about mead, I often hear them say something like I think it is too sweet for me, or I don’t like honey. But mead is not necessarily sweet, nor does it always have a strong taste of honey. Mead can be everything in between from very sweet to very dry, the drier the mead is, the less it tastes of honey, and the sweetness of the mead is also reduced.

As I mentioned before flavors are often added to the mead, and the flavors that the Viking could add to the mead depended a lot on what grew in the local area. The landscape various a lot in Scandinavia, and it did even more so one thousand years ago.

Mead can be brewed the whole year, so the flavors can really change a lot depending on the season and which herbs and fruits that are available. The time it takes to brew mead also depends on which ingredients that are being used, mead can be made in as little as a month if you are in a hurry, but it can also take a year or even longer.

The people in the Viking age were familiar with beekeeping, and some people produced their honey locally, while others traded for it. The way apiculture has been practiced has changed a lot since the early beekeepers were around. Today, the beekeepers use removable-frame hives, so they can keep reusing the same bees to produce honey, but it has not always been that way.

The way beekeeping was practiced in the Viking Age, and most of the known history was usually done by using skeps, which are coiled domes of straw. However, using this method meant that to remove the combs with the honey from the beehive, the bees had to be killed by either drowning the hive or by smoking the hive over a fire.

How to extract honey

Everything was used from the beehive, and nothing went to waste. The honey was extracted from the combs by placing them in a cloth bag and allowing it to drain. When it had drained as much honey as possible, the combs and even the entire beehive was crushed and put into a pot of water, to get every drop of honey out.

The raw honey was used to make the highest quality of mead, and the honey-water was used to produce a mead of lesser quality. Being a beekeeper was of course, not the only way, to get honey, some people would go into the forests to track down beehives. Which can be read in Anglo-Saxon poetry, for example, riddle 25, in the Exeter Book.

I am man’s treasure, taken from the woods,
Cliff-sides, hill-slopes, valleys, downs;
By day wings bear me in the buzzing air,
slip me under a sheltering roof-sweet craft.

Soon a man bears me to a tub. Bathed,
I am binder and scourge of men, bring down
the young, ravage the old, sap strength.
Soon he discovers who wrestles with me
my fierce body-rush-I roll fools
Flush on the ground.

Robbed of strength, Reckless of speech,
a man knows no power Overhands, feet,
mind. Who am I who bind Men on Middle-earth,
blinding with rage? Fools know my dark power by daylight.

Mead was a drink for both the common folk and the upper class in the Viking society. However, people of lower social status would probably have been drinking mead of lesser quality, such as the honey-water, and might only have been given mead made from pure honey at feasts or at rituals held by the noble or very rich.

Did Vikings drink from horns?

Drinking horns filled with mead is how Vikings often are depicted, and there has been found numerous of drinking horns throughout Scandinavia to confirm that image. However, drinking from horns was definitely not something everyone did, nor was it something that everyone could afford to do.

It is difficult to prove how many people used drinking horns in the Viking age, and if it was something that everyone did or something that was reserved for those with a high-status, or maybe even just for ritual use.

Regardless if drinking horns were for the common folk or not, it was not the only drinking vessel that was used. Primitive drinking vessels such as cones made from either rolled birch or rowan bark were also used. Bowls were also popular to drink from, and they could be passed around to everyone in the room.

Cups and bowls made from materials such as wood and silver have also been found at many excavations. For instance, the cup known as ”the Jelling cup” (”In Danish: Jellingebægeret”), was found at a burial mount in Jelling, Denmark. This cup used to belong to King Harald Bluetooth, who has been credited for uniting the Danes and making them Christian, which can be read on the Jelling stone.

Drinking glasses have also been used in Scandinavia, however, they were not produced locally, but instead, they were imported from around the Rhine, or maybe even further south to around the mediterranean sea, which made them a luxury item. The drinking glass vessels were called ”hrimhaldar” in old Norse, which means frost-cups, and they came in pretty much all shape and sizes, and some of them were even made specifically to appeal to the Nordic culture.

Mead is mentioned a couple of times in the old Norse sagas, for instance, there is the she-goat called Heidrun who feeds on the green branches of the great world tree known as Yggdrasil. From her udders flows a neverending stream of mead into a big barrel in Valhalla, which supplies Odin’s chosen warriors with mead every night for their great feast.

Mead was in fact, loved so much by the Nordic people that they had a saga called ”the mead of poetry”, which is dedicated entirely just to this sweet and delicious drink. In this saga, the Gods and Goddesses create a being known as Kvasir, by spitting into a cauldron. Kvasir turns out to be one of the wisest beings in the world and he is able to answer any question.

The Gods allowed him to leave Asgard and travel around the world, however, his life would be short-lived, and it ended in a tragic way when he was killed by the two dwarves, Fjalar and Galar who then drained him of his blood, and turned it into mead, which became known as the mead of poetry.

What is the difference between mead, wine or beer

Mead is neither a beer nor a wine, it is its own type of alcoholic beverage. Mead is not brewed by the fermentation of water and grain or water and grapes, which is the case for beer and wine, but instead, it is brewed by fermenting honey, water, and either herbs or fruits, but sometimes grain can also be used.

Where to buy mead?