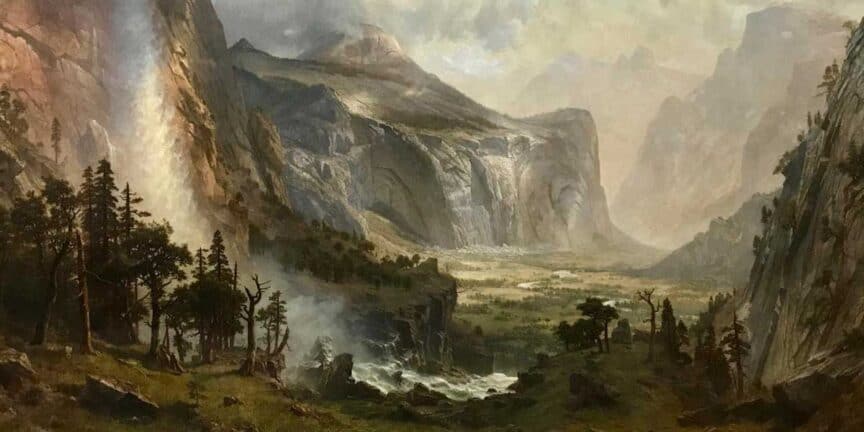 Alfheim is the home of the Elves.

In this lake is the island Lyngvi, on this island is the Fenrir wolf bound.

Asgard is the home of the Aesir Gods.

Barri is a sacred grove where the God Freyr and Gerd were married.

Bifröst or Bilröst is the rainbow bridge that connects Asgard and Midgard, the guard at Bifröst is Heimdall. Bifröst was built out of, fire, air, and water by the Gods. The three materials give the three colors Red “Fire”, Blue “Air”, and Green “Water”. An in-depth article with facts about Bifröst.

Breidablik is the shining house of the God Baldur in Asgard.

Byrgit is the well, where the two children Bil and Yuki from Midgard went, to get some water before they were stolen by Mani.

Eljudnir is the palace of the Goddess Hel, in Niflheim. The hall has very high walls, high banisters, and huge gates. Hel has two servants in her palace, their names are Ganglot and Ganglati.

Fensalir is the home of the Goddess Frigg.

Fólkvangr: Field of the host, “people field” or “army field”

Fólkvangr which means “field of the host”, “people field” or “army field” It’s a place where half of those that die in a battle go for the afterlife, while Odin will receive the other half.

Gimli is the court of the Gods after Ragnarök. Gimli is the most beautiful place in the world, and Gimli has a roof made of gold.

Gjallarbru is the bridge that crossed over the river Gioll and connects the worlds of the living and the dead.

Gioll is the river that divides the world of the dead from the living. The bridge Gjallarbru crosses this river.

Gladsheim is the hall in Asgard where all the Gods have their high seats.

Glitnir is the hall where the God Forseti lives.

Helheim is the home of the dead and their ruler Hel.

Himinbjorg is the mountain where the rainbow Bifrost connects Asgard and Midgard. On this mountain, the God Heimdall lives, the guardian of Bifrost.

Under this Island, the sea giant Aegir and his wife Ran lives in their coral cave. It’s believed that the island Hlesey is the island of Laeso in the Kattegat “Cat’s throat”. The island is between Jutland and Zealand in Denmark.

Hlidskjalf is the high seat of Odin, where he can see out through the whole Universe. The throne is in the high tower of his palace Valaskialf in Asgard.

Hnirborg is the mountain where the giant Suttung hid the mead of poetry and his daughter Gunlod stood guard.

The wellspring in Niflheim is called Hvergelmir from where the 11 rivers called the Elivagar comes. Above the spring the dragon Nidhug gnaws on one of the roots of Yggdrasil.

Ironwood is a forest east of Midgard. In this forest lives the troll women who bore giantesses and giant wolves.

Jotunheim is the home of the giants.

Laerad is the great tree that is around Valhalla.

Lyngvi is the island in the middle of the lake Amsvartnir, where the Fenrir wolf is bound.

Nastrond is in Hel, where the dragon Nidhug eats the corpses that wash up on the shore.

Niflheim is to the north, inside somewhere under the ground is Helheim home of the dead.

Noatun is the house of the Vanir God Njord, in Asgard.

Midgard is the home of the Humans, it’s connected to Asgard by Bifrost “The Rainbow Bridge”.

Muspelheim is to the south and is the home of the fire giants and demons with their ruler Surtr.

Sessrumnir is the hall where the Goddess Freya, welcomes her half of the slain heroes from Midgard.

Svartalfheim is the home of the Dark Elves (Dwarves).

In the northern hemisphere, there is something called the northern lights. It is believed that the jotun Gerd, emitted this green color into the air.

Thrymheim is the place where the giant Thiazi and his daughter Skadi lives.

Urdarbrunn is the well in the center of Asgard. The water in this well is so sacred that everything that came in contact with it, became white as an eggshell. From this well came 2 birds, white as snow. They are called swans, and from them descended all the birds, that borne the name swans.

Utgard is the place in Jotunheim, where the giant Skrymir tricked Thor with illusions.

Valaskialf is the palace of the chief God Odin; it has a silver roof and a tower in which Odin can see out over all the nine realms from his high seat Hlidskialf.

Valhalla is where all the fallen warriors who have died bravely in battle will spend their afterlife. Read more about Valhalla.

Vanaheim is the home of the Vanir.

Valgrind is the outer gate of Valhalla.

Vimur is the largest of the Elivagar Rivers, which were formed at the beginning of the world. The river is rushing through Jotunheim, the giantess Gjalp tried to raise the level of the river by urinating in the river. She wanted to drown the God Thor, but Thor threw a well-aimed stone at her, and she ran away.