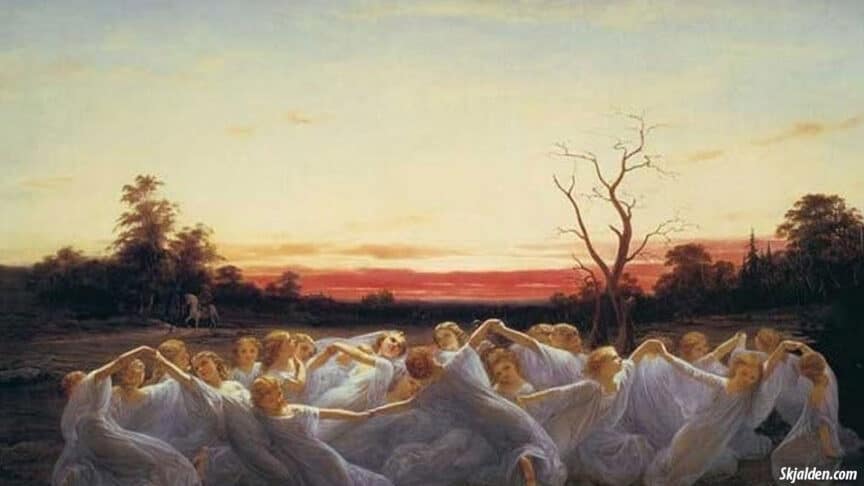 The elves (Old Norse: álfar, singular, álfr) are divine beings in Norse mythology. Not much is known about them, but they have some form of connection to the Aesir and the Vanir. Freyr who is the brother of Freya became the ruler of their realm Alfheim (Old Norse: Álfheimr).

The elves have been described as being more beautiful than the sun. They are sometimes referred to as light elves, this could indicate that they either have a white complexion or have a spirit-like figure.

The elves are just like the Vanir, deities of nature and fertility, and they have the power to make humans ill, but they can also cure them with their vast knowledge of magical powers, just like a Völva.

Snorri Sturluson has separated the elves into two groups, the light elves (Old Norse: ljósalfar) and dark elves (Old Norse: svartalfar). However, this might be a misconception and a wrongful translation of the Poetic Edda. Since the dark elves have been described as living under the ground, which could indicate that they, in fact, are dwarves.

The realm of the dwarves is also called Svartalfheim (Old Norse: Svartálfaheimr), which must mean that svartalfar is another name for dwarves.

When reading the old Norse sources, the elves and dwarves do seem to be very closely connected, and they could, in fact, be the one and the same. It should be said that the elves and dwarves should not be understood as they are portrayed in J.R.R Tolkien’s universe, where they are very different species. In my personal opinion, they are not the same, but they are very closely connected.

The elves were worshipped in Scandinavia during and prior to the Viking Age. The most important elven ritual occurred at the end of autumn, and this was and still is called Álfablót (The elven sacrifice). This ritual is still held within many Ásatrú communities throughout Scandinavia, and parts of North America.