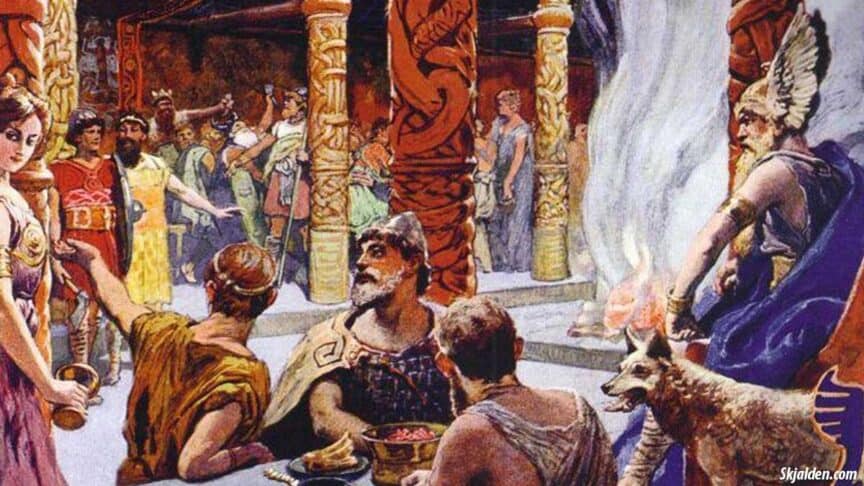 Valhalla (Old Norse: Valhǫll) is the hall of the fallen warriors in Norse mythology. Valhǫll is two compound words, Valr meaning “dead body on a battlefield”, and hǫll meaning hall.

It is Odin who decides the outcome of every battle in Midgard, every time there is a new battle he sends the Valkyries down to Midgard so they can observe the battle. The valkyries hover over the battlefield, and choose the bravest of the fallen warriors and bring them back to Valhalla.

The Icelandic author Snorri Sturluson mentions in the Prose Edda that half of the fallen will go to the field of Fólkvangr and that Freya has the right to pick the first half of the warriors. This has been contested by some scholars, for instance, Dr. Jackson Crowford, an expert in old Norse, has proposed that Fólkvangr could be another name for Valhalla.

However, this does not remove the importance of Freya from the equation. She might be the one in charge of the valkyries, and mentioning her as having the first pick, could have been done in order to show how significant she is.

The chosen ones will be greeted with a horn filled with mead at their arrival in the afterlife. They won’t see any of their loved ones in Valhalla unless they also die bravely in battle. Anyone who has not been chosen by a valkyrie will go to the queen of Hel.

According to the poem Grímnismál, the gates of Valhalla are so wide that 800 warriors can walk through it next to each other. The roof is decorated by shields, and it is held up by spear shafts, on the benches lay chainmails. On the western door hangs a wolf, and above him an eagle. Valhalla is enormous, it has 640 rooms, and many of them are most likely dedicated to housing the large army of Einherjar (lone fighters), the greatest army of them all.

Six hundred doors
and still forty more,
I believe, are at Valhalla.
Eight hundred Einherjar
will go together out each door
when they go to fight the wolf.
– Grímnismál 18

Valhalla is not a place where you will sit on a cloud while playing the harp, nor do you get 72 virgins, it is an afterlife for warriors. Every day, they will practice with the ax, spear, and sword for the battle at Ragnarök. It does not matter if they get their arms, legs, or head chopped off, while in Valhalla, they are immortal.

All the Einherjar
in Odin’s home fields
fight among themselves each day.
The slain they select
then ride from the battlefield;
reconciled, they sit again together
– Grímnismál 41

Every evening after practice they will join Odin in the huge dining room, where they will be served pork from the boar Sæhrímnir and mead from the goat Heidrun. Anyone can eat and drink as much as they want, there is only one who doesn’t eat, and that is Odin, he only drinks wine. Odin feeds his two wolves Geri and Freki his potion of the meat while enjoying the company of the warriors.

Geri and Freki
are fed by the battle-skilled
father of armies;
But on wine alone,
weapon glorious
Odin ever lives.
– Grímnismál 19

The correct way to say “to Valhalla” in old Norse according to Dr. Jackson Crawford is “til Valhallar”. The reason why it’s Valhallar and not Valhǫll, is because it has a genitive form since it follows the preposition “to” (Old Norse: til).