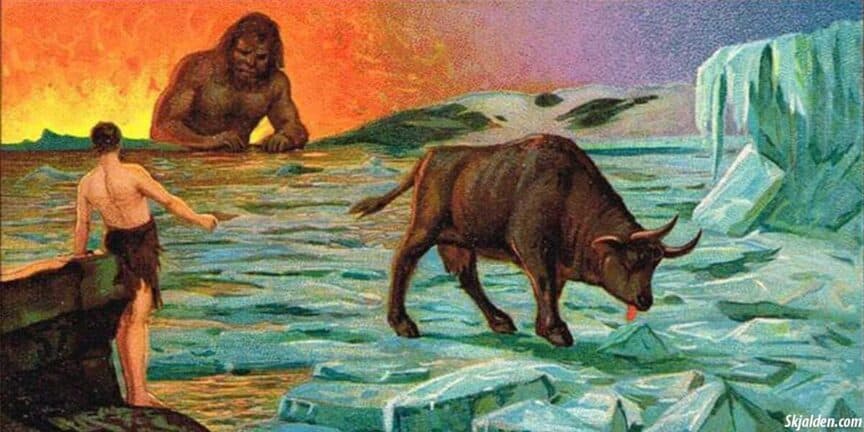 Before the dawn of time and before the world was created in Norse mythology there was only a big dark vast emptiness called Ginnungagap. From this, two realms came into existence, Niflheim, and Muspelheim.

In the north Niflheim formed, it became such a dark and cold place that there was nothing else than ice, frost, and fog.

To the south of Ginnungagap, the realm of Muspelheim formed, this became the land of fire, and it became so hot that it would only consist of fire, lava, and smoke. This is the place where the fire giant Surtr lives along with other fire demons and fire giants.

The coldest place in the world

It is said that the spring called Hvergelmir is where all the cold rivers are from. The name of these cold rivers is Élivágar which means “ice waves, each of these eleven rivers has a name, but as a whole, they are referred to as Élivágar.

The water from Élivágar floated down the mountains to the plains of Ginnungagap, where it solidified to frost and ice, which gradually formed a very dense layer, which grew in size, in all directions.

The first giants in Norse mythology

From Muspelheim in the south came lava and sparks into the great void Ginnungagap. In the middle of Ginnungagap, the air from Niflheim and Muspelheim met, the fire melted the ice and it began to drip, some of the ice started to take the shape of a humanoid creature. It was a jötunn, also called a giant, this giant was Ymir, the first giant in Norse mythology.

When Ymir fell asleep, he started to sweat and the sweat under his arms grew two more giants, one male, and one female, and one of his legs paired with the other to create a third, a son Thrudgelmir “Strength Yeller” These were the first in the family of frost giants also called jötnar. They were breastfed by the cow giant Audhumbla who like Ymir, was created from the melting ice in Ginnungagap.

Odin was born by a giant

The giant cow Audhumbla fed herself on a block of salty ice, and while she was liking on the ice block something strange happened. On the first day, some human hair emerged from the block. On the second day, Audhumbla licked on the salty ice block a head appeared.

At last on the third day, the rest of the body came out. The man who had grown out of the salty rock was Buri, the first of the Gods. Buri was a giant, big and handsome. He would later have a son called Borr, with his wife Bestla. Borr and Bestla would also have three sons, Odin, Vili, and Ve.

The death of Ymir

Odin and his two brothers were bothered by the fact that the giants outnumbered the Aesir, the giants were constantly conceiving new giants. The only solution they could see was to kill Ymir, the three brothers waited until Ymir was asleep before they assaulted him.

A horrifying battle began, and by using all their strength they managed to kill Ymir, the blood spouted out with a furious force in every direction from Ymir’s body, and most of the giants drowned in the huge flood of blood.

Only two giants survived, Bergelmir and his wife, the couple fled and found a safe place in the land of mist, and saved their lives, all future giants are descended from this couple.

The world was created

The blood became the oceans, rivers, and lakes.
The flesh became the land.
The bones became the mountains.
The teeth were made into rocks.
The hair became the grass and trees.
The eyelashes became Midgard.

They threw the brain up in the air and it became the clouds, and the skull became the sky, Ymir’s skull would be the lid that covered the new world. The brothers grabbed some of the sparks shooting out from Muspelheim, the land of fire.

They threw the sparks up toward the inside of the skull, these sparks gleamed at night and this is what we call the stars. On the plains of Idavoll, they built Asgard, which would be the home of the Gods. Very far away from Asgard, in a place called Jotunheim was the giants allowed to live.

The dwarves came into existence

The dwarves came into existence While Odin and his brothers were in the progress of creating a new world from the body parts of the giant Ymir, worms kept crawling out of the rotting remains, these worms would become the dwarves. Because the three brothers Odin, Vili, and Ve were afraid that the sky would fall down they told four of the dwarves to hold up the sky, they were sent out in each direction of the world.

The names of the four dwarves are North “Nordi” West “Vestri”, South “Sundri”, and East “Austri”, The rest of the dwarves made their homes in rocks and caves under the ground, which is called Svartalheim the home of the dwarves. They became experts in craftsmanship, and they have created some of the most powerful and magical weapons, like Mjölnir, Thor’s hammer, but also beautiful jewelry.

A man by the name Mundilfari “the one moving according to particular times” from Midgard had two children, they were so shiny and beautiful that he decided to call his son Mani “Moon”, and his daughter Sol “Sun”.

The Gods were so furious by this arrogance, that they took both of them and put them up in the sky. Sol would ride in a chariot that is pulled over the sky by two horses Árvakr “Early awake” and Alsviðr “Very quick”. Under the chariot, there is a shield called Svalin, that protects the earth below from the flames.

Mani is only pulled by one horse Aldsvider Mani stole two children from Midgard, to help him drive his chariot, their names are Bil and Yuki. They are pursued by two wolves, Sköll “Treachery” and Hati “Hate” each day, Hati would take a small bite out of the Moon, but the Moon would get away and heal itself again. These two wolves will one day catch the sun and the moon, which will happen at Ragnarök.

However, there is also a story about a giant by the name Nörvi which had a daughter called Nótt” Night”. The daughter Nótt had a son Dagr “Day”. Both Nótt and Dagr are riding in chariots that are pulled by horses.

Nótt is pulled by her horse Hrimfaxi “rime mane”. And behind her is Dagr, pulled by his horse Skinfaxi “shining mane”. These are apparently also followed by the two wolves, Sköll and Hati, which makes this part a bit confusing since there are multiple and conflicting sagas about this part in Norse mythology.

One day Odin and his two brothers Vili and Vé walked on the beach. There they found two logs, one was from an ash tree and the other was from an Elm tree.