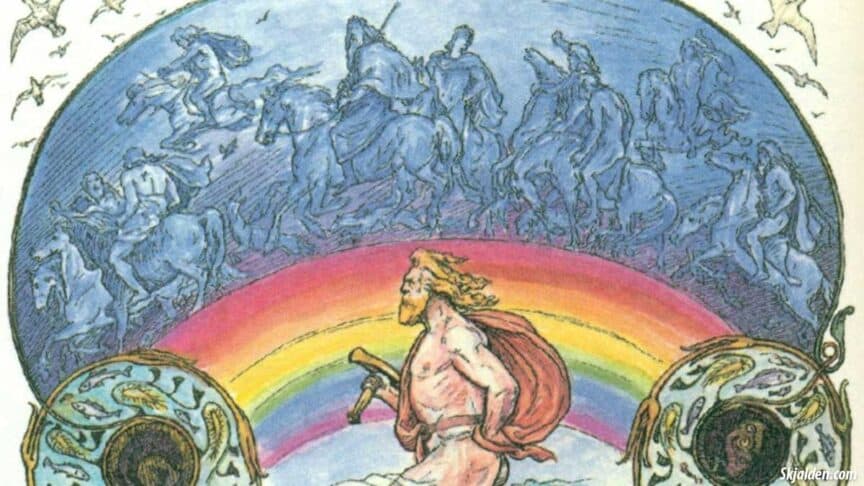 In Norse mythology, Bifrost is the rainbow bridge that connects Asgard (home of the gods) with Midgard (home of mankind). Bifrost consists of three colors and it is so big that it can be seen in all of the nine realms.

The meaning of the name Bifrost is uncertain, but according to the Norse language expert Dr. Jackson Crawford, it could be translated into “the blinking mile”, or “the winking mile”. The bridge has been spelled in two slightly different ways. In the Poetic Edda, the bridge is spelled “Bilröst”, and in the Prose Edda, it is spelled “Bifröst”.

According to Dr. Jackson Crawford, “bil” In Old Norse means “moment or failure”, this is based on one of Odin’s names “Bileygr”, which means either wavering or winking-eyed.

Besides the two names Bifröst and Bilröst, the bridge has also been called Ásbrú (Aesir bridge) in the Prose Edda by Snorri Sturluson.

The guardian of Bifrost

It is the god Heimdall that is the guardian of the rainbow bridge, and therefore, he is a symbol of the preservation of the cosmos. He is the communication link between the gods and goddesses and mankind.

Heimdall was probably chosen to fulfill this important task based on his incredible ability to see hundreds of kilometers. And should the weather be cloudy, it won’t matter to Heimdall, because he also has an incredible hearing, in fact, he can even hear the wool grow on the back of a sheep.

Heimdall is equipped with a horn named Gjallarhorn, which means “the yelling horn” or “the loud sounding horn”. This horn can make a sound that is so loud that it can be heard in all the realms. At Ragnarök, it is this horn that will warn all of the Aesir that the war is about to begin. This will also be the day that Bifrost will be destroyed.

If a jötunn should be stupid enough to try and attack or sneak into Asgard, then Heimdall has his trustworthy sword named Hofund at his side. But it is very unlikely that a jötunn will make it up the rainbow bridge. Because the bridge is always on fire, and it is so hot that it always has a red glow.