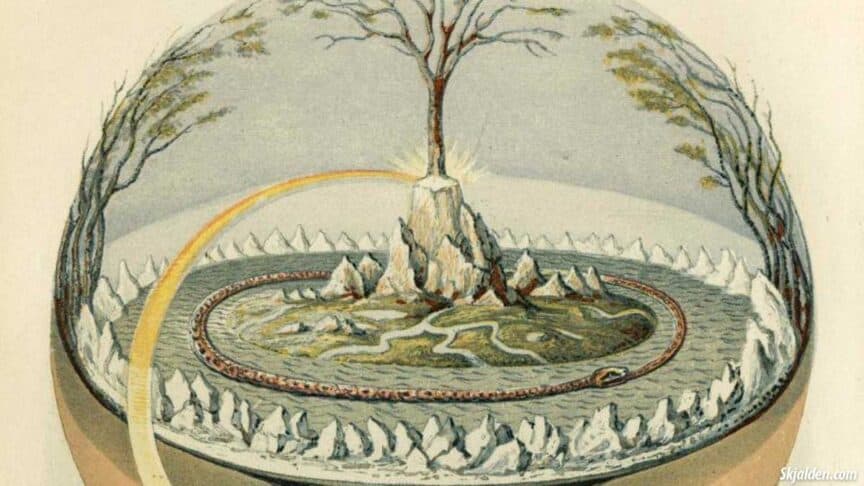 Yggdrasil is an eternal green ash tree in Norse mythology. It stands in the middle of the world, with branches that stretch out over all of the nine realms. Each realm hangs on its own branch, but if the tree should shake or fall, so will all the realms.

Yggdrasil is also called Mimir’s tree (Old Norse: Mímameiðr) and Lærad (Old Norse: Læraðr). The idea of a world tree is also present among other Germanic tribes. In Saxony, Germany, the pagans worshipped a tree called Irminsul. This tree was eventually destroyed by Charlemagne during the Saxon Wars in the 8th century. (Read more: The Viking Age began because of heathen resistance)

The name Yggdrasil is a kenning, a mythological metaphor that is described in the Edda poem Hávamál. Yggdrasil is a combination of two words. Yggr, which is one of Odin’s names and means “the terrifier, the one who strikes all”. Drasill basically means “horse”, but in a majestic and ceremonial way. Therefore, the name Yggdrasil means Odin’s horse.

The name should be understood in the context of Odin’s connection with the world tree. Odin who is always in pursuit of more knowledge, once sacrificed himself on the tree to gain more knowledge.

I know that I hung on a windy tree
nine long nights,
wounded with a spear, dedicated to Odin,
myself to myself,
on that tree of which no man knows
from where its roots run.
– Hávamál stanza 138

When Odin was hanging on the tree, he was, therefore, riding the tree as a horse. This mythological metaphor can be seen as Norse humor.

No one gave me bread nor a horn,
I looked down,
I took up the runes, screaming I took,
I fell then from there.
– Hávamál stanza 139

It was in the final moments before Odin fell from Yggdrasil, that he learned the secrets of the runes. We see time and time again, that knowledge is not gained without some form of personal sacrifice in Norse mythology.

Yggdrasil is carried by three enormous roots, with a well located next to each of them. The first root is located deep under the thick ice in Niflheim. It is, in fact, located so deep under the ground that it takes Odin’s horse Sleipnir nine days at full speed through the dark valleys to arrive at the root.

It is deep below Niflheim, where the realm of Helheim is located. This is where the first root of the well called Hvergelmir is located, not much is known about this well and it could have some undiscovered benefits that only the shadows of this realm know. Hvergelmir is sometimes referred to as the well of poison, but this well is also the source of life. It was from this well that the liquid came that created the first living being in Norse mythology.

This root in the depths of Helheim is struggling every day to maintain its strength because the great dragon Níðhöggr (Meaning: Hateful Striker) is constantly chewing on it. Níðhöggr only stops chewing when he hears the Hellhound Garmr howling in the distance.

At this moment Níðhöggr will spread its wings, and fly to the entrance of Hel, where new dead souls have arrived. He will fly down and land on the ground next to them, and suck the blood out of all the corpses so they turn completely pale.

According to the lay of Grimnir (Grímnismál), Níðhöggr is not alone at the root. Countless snakes are biting at the tree’s shoots.

More snakes
lie under the ash Yggdrasil
than any old fool imagines.
Going and Moin,
they are Grafvitnir’s sons,
Grabak and Grafvollud, and Ofnir and Svafnir
will always, I believe
eat away the tree’s shoots.
– Grímnismál 34

When Níðhöggr is sitting and chewing on Yggdrasil’s root he is often interrupted by Ratatoskr (Meaning: Drill Tooth) who fills his ears with insults. Ratatoskr is an annoying squirrel who has nothing better to do than to run up and down the tree between the dragon and the eagle on the top.

Every time the eagle makes an insult about Níðhöggr, the squirrel will run down the tree and tell the dragon what has been said about him. Níðhöggr is just as rude in his own comments about the eagle, and upon hearing the new insults, he replies back at the squirrel with his own insults about the eagle. Ratatoskr’s involvement as a carrier of these messages keeps the hatred between Níðhöggr and the eagle alive, and he is the sole reason why they remain constant foes.

Not much is known about the eagle, but it has been described in the Prose Edda to possess knowledge of many things. The eagle must be a lot bigger than a normal eagle because between its eyes sits a hawk named Vedrfolnir (Old Norse: Veðrfölnir).

The hawk is possibly associated with the knowledge of the eagle, it may, just like Odin’s two ravens Huginn and Muninn, fly out to gather knowledge. Although, it is only according to Snorri Sturluson that there are both a hawk and an eagle at the top of the world tree, so this part is uncertain.

Other creatures also dwell among the branches of Yggdrasil. On the roof of Valhalla (Old Norse: Valhöll) stands two animals, the goat Heidrun (Old Norse: Heiðrún) and the stag Eikthyrnir (Old Norse: Eikþyrnir). The stag spends its day eating the new cuttings from the tree, and the goat eats the leaves.

From the udders of the goat flows endless streams of mead into a big tub in Valhalla. Every evening after the warriors in Valhalla have been practicing for Ragnarök, they will sit down in this hall to relax, eat the meat from the giant pig called Sæhrímnir and drink the mead from the goat.

Among the green branches live four other stags, their names are Dáinn, Dvalinn, Duneyrr and Duraþrór. They are busy throughout the day devouring the leaves from the tree.

The second root is in Jotunheim, at this root is the well called Mimir’s well (Old Norse: Mímisbrunnr). This is the well of wisdom, and it belongs to Mimir. Every day Mimir drinks from this well by using his drinking horn called Gjallarhorn. This horn has the same name as the horn used by Heimdallr, therefore, it is possible they have one each.

Mimir does not keep the well for himself, he does allow others to drink from it, but for a heavy price. Odin once drank from the well of wisdom, but he had to sacrifice his right eye as payment.

Mimir’s well is probably the only great thing in Jotunheim, the rest of it is just a grim place, not much grows here besides trees and grass. But the many rivers are filled with fresh water that seeps down to nourish the roots of the many trees.

The third root is in Asgard right next to the well named Urðr (Old Norse: Urðarbrunnr). Next to this well is a hall, where three female beings called Norns live, they are perceived as the personification of time. Their names are Urðr, Skuld, and Verðandi.

Each morning these Norns draw water from the well, and collect the moist earth or clay around it, and pour it over the tree Yggdrasil. This is being done to keep the world tree, green and healthy. If they fail this task, the tree will begin to rot.

The water from Urðarbrunnr is magical, and it is so sacred that everything it touches, besides Yggdrasil, will become as white as the membrane (called skjall “skin”) inside of an eggshell. It is from this well the swans originate from in Norse mythology. The white color is a symbol of cleanliness, pride, beauty, greatness, light, and death.

It is also at this spot that the gods and goddesses have their daily meetings, and where they cast judgment. This place is called a “tinget”, and based on how the Nordic society functioned during the Viking Age, this could be compared to a parliament. For instance, in Denmark, the parliament is called “folketinget”, the people’s parliament.

At Ragnarök, the two last humans, a male “Liv”, and a female “Livtraser” will find shelter inside Yggdrasil. Here they will stay until it is safe to return to the new world. They will become the ancestors of all future humans.

According to Adam of Bremen, a German medieval historian. There was a great tree in Uppsala, Sweden, it had branches that were always stretched around it. This tree was always green, even in winter. It is unknown what kind of tree he was writing about, but it is possible that it was a pine tree. According to Adam, the pagans who lived here made sacrifices to the gods at a nearby lake.