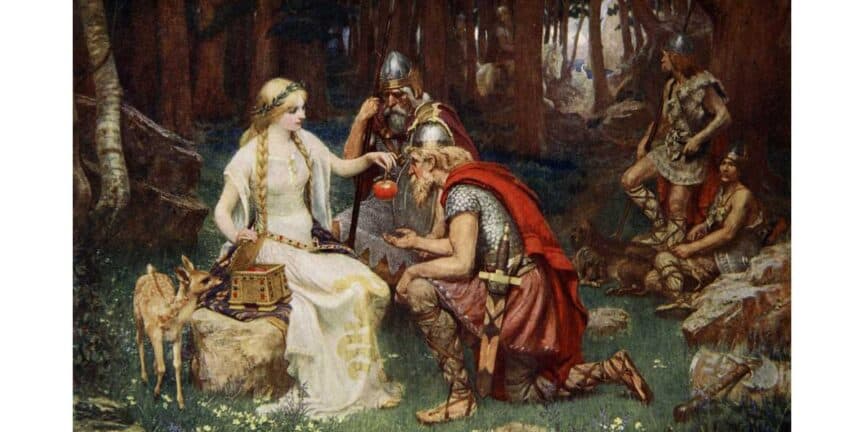 There is a man named Aegir who is greatly skilled in the arts of magic; he lives on the island called Hlesey in the middle of Kattegat (Læsø in Danish).

One day Aegir traveled to Asgard (The home of the Gods). The Aesir knew that he was coming and they welcomed him into their home, but most of what the Aesir showed him was through spells and shapeshifting.

In the evening when it was time to drink, Odin had swords brought to him into the hall where they were sitting. These swords shone so brightly that no other light was needed while they sat at the table drinking. After the Aesir had been drinking for a while, they went to their feast. The twelve Aesir who were to be the judges sat in their high seats. They were Thor, Njord, Freyr, Tyr, Heimdall, Bragi, Vidar, Vali, Ullr, Hoenir, Forseti, and Loki.

The Goddesses, who were to be the judges, were Frigg, Freya, Gefjun, Idunn, Gerd, Sigyn, Fulla, and Nanna. To Aegir, it seemed that everything he saw around him was noble. Spectacular shields hung on the walls in the great hall. Strong and tasty mead was served, and everyone was drinking heavily.

Next to Aegir sat Bragi. They drank together and exchanged stories. Bragi told Aegir about the many things that had happened to the Aesir.

The Theft of Idunn and Her Apples

Bragi began his storytelling by saying that three of the Aesir, Odin, Loki, and Hoenir, were once traveling from Asgard and crossed mountains, wildernesses, and deserts, and the food was difficult to find.

They then arrived at a hill overlooking a valley, and they went down the hill into the valley. Here they saw a herd of oxen. They decided to take one of them and began to cook it. When they thought the mead was ready, they opened the cooking pit but saw that the ox was not cooked.

They tried to cook the ox for the second time, and when they opened the cooking pot, the meat was still raw. They stood around the cooking pit and asked each other what could be the cause of this.

Suddenly they heard a voice coming from above the oak tree, which they were standing under. They looked up and saw an eagle sitting on one of the branches; I am the one who is causing the food to remain uncooked. If you are willing to let me eat first, I will let you cook it.

The Aesir was hungry and tired, so they agreed to this, and the eagle flew down from the tree and landed on the pit. The first thing the eagle did was to eat the ox’s two thighs and both of its shoulders.

This made Loki angry, and he picked up a large stick and started swinging it at the eagle with all his might. Loki struck the eagle, and the eagle started to fly away, but the stick was stuck in feathers on the eagle’s body, with Loki hanging and dangling on to the other end.

The eagle flew so near to the ground that Loki’s feet were being hit by rocks, dirt, and trees. Loki thought that his arms might be ripped off. Loki started yelling and begging the eagle for mercy, but the eagle just said that he would not be saved unless he swore an oath that he would find a way to bring Idunn, with her apples of youth out of Asgard.

Loki agreed to the demands of the eagle, and he was set free and returned to his travel companions. When the Aesir came back to Asgard, Loki made a plan to trick Idunn into leaving Asgard.

A few steps from Asgard the giant Thiazi arrived in the shape of an eagle and grabbed Idunn with his big claws, and flew away with her to his home in Trymheim.

Weeks and months went by, and Idunn’s disappearance started to affect the Aesir in a bad way, and they began to grow old and gray.

The Aesir held a meeting together and asked one another about Idunn, and what might have happened to her. They came to realize that she had been last seen leaving Asgard with Loki. Loki was then brought to the meeting, where he was threatened with torture or death. After a while Loki became afraid, and he said he would go to the land of the giants, to find Idunn, but only if Freya would lend him her falcon shape.

Loki Travels to the Land of the Giants

When Loki got the falcon shape from Freya, he flew north into Jotunheim, the land of the giants. Loki arrived at Thiazi’s home Trymheim, on a day the giant was out on the sea fishing, so Idunn was alone in the house.

Loki changed Idunn into the shape of a nut, and holding her in his claws, Loki flew away as fast as he could. Later in the day when Thiazi came home, he found Idunn missing. He quickly shapeshifted into his eagle shape and flew after Loki.

Thiazi bashed his wings in rage and fury and flew faster than the speed of sound, and was just behind Loki when he was near the gates of Asgard.

Thiazi who was unable to catch Loki in time was unable to stop himself flying into the fire. His feathers caught fire, and he fell from the air, like a rock, and died as soon as he hit the ground.

Skadi seeks revenge for her father

When Skadi, the daughter of the giant Thiazi heard the news about her father’s death. She put on her helmet and armor and taking all her weapons with her. Skadi arrived at the gates of Asgard and was ready to avenge her father.

The Aesir went to the gate and offered Skadi compensation for her father’s death. She could choose a husband for herself among the Aesir, but she was only allowed to see their feet.

While Skadi was standing and looking at the feet of the Aesir, she saw the feet of one man looking very beautiful and said, I choose that one. Few things on Baldur will be ugly she thought, but to her surprise, it was Njord from Noatun.

Another condition of her settlement was that the Aesir must do something to make her laugh. Loki tied a cord around the beard of a goat and the other end around his testicles. Loki and the goat then started pulling back and forth, while they were both screaming in pain, until Loki finally fell into Skadi’s lap, and then she laughed.

With this, the Aesir concluded that they had done their part of the settlement. Odin did one final thing to please Skadi, he took the eyes of Thiazi and threw them up into the sky, so they turned into stars.

The Aesir started to talk about Thiazi; she seemed to have been exceptionally powerful, does anyone know his origins?

Bragi answered that Olvaldi was the name of Thiazi’s father, and if I were to tell you about him, you would find it to be an amazing story.

Olvaldi had huge amounts of gold, and when he died his sons, Thiazi, Idi, and Gang were to divide the inheritance. They divided the gold among them by each taking a turn, taking a mouthful of gold.