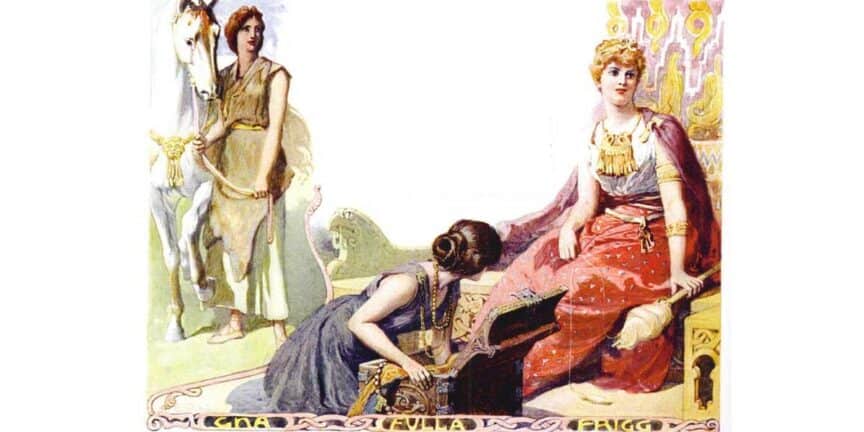 Frigg (Old Norse: “beloved one”) is the queen of Asgard and she might be the daughter of the giantess Fjörgynn. Frigg is married to Odin the all-father, and together with Odin, they have two sons Baldur and Hod. She is also the stepmother to Thor, Heimdall, Höder, Hermod, Tyr, Bragi, Vidar, Vali. Frigg is a sorcerer and associated with love, marriage, fertility, and motherhood, she also has the power of prophecy and yet she never reveals what she knows about the future.

She is the only one other than Odin who is permitted to sit on his high seat “Hlidskjalf ”, and look out over the universe. The name of her house is Fensalir, the name means “marsh hall”. Women would often go to the wet marshlands to worship the Goddess. Frigg might be associated with Friday, but there are conflicting sources so it could also be the Goddess Freya.

Frigg has at least three maidens and she is especially attached to her maiden named Fulla, she knows all of the secrets of Frigg, she talks about everything with her and trusts her with everything. Fulla is wearing a golden snood that she got as a gift. Gna is another maiden of Frigg and she is tending to all of her needs and is her most trusted messenger. She runs errands for her in all of the nine realms, and if she needs to deliver a message in a hurry, Gna just rides her horse, Hofvarpnir “Hoof Trasher”, through the air or over water. If Frigg wants to protect a person or an object she sends her other maiden named Hlin.