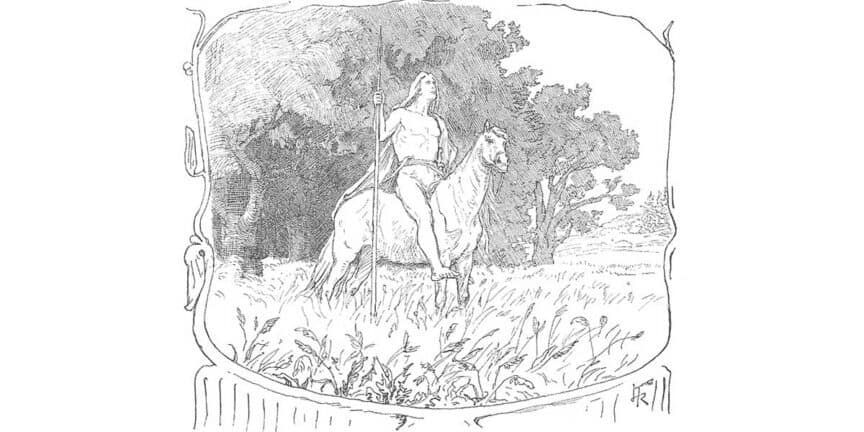 Vidar (Old Norse Víðarr), his name might mean “Wide Ruler” he is the son of the all-father Odin and the giantess Gríðr. Yes, you read that correctly, some of the Aesir have previously been together with the jötnar, also known as giants. Some of the giants were so beautiful that even the Gods could not resist their beauty.

Vidar is the second strongest of the Aesir only Thor is stronger than him, Vidar might have inherited some of his strength from the giant side of the family. Vidar lives in Asgard in a great hall called Vidi, it’s a peaceful home, and the inside looks like a garden.

Vidar is known for being very silent he loves being at peace with nature. Vidar sometimes sits for hours in his garden working on a special shoe.
This special shoe is the strongest of all the shoes and is being made from all bits and pieces of leather that shoemakers throw in the trash when making new shoes in Midgard. Vidar will use this special shoe to revenge his father’s death, Odin, at Ragnarok (Ragnarök).

This is when Vidar will fight the fearsome Fenrir wolf, by placing one foot on Fenrir’s lower jaw and pressing his hands on the upper jaw until Fenrir’s mouth will be pulled apart. Ragnarok is the doom of the Gods and the end of the world. But from death, there also comes life, and Vidar is one of the few Gods who will survive Ragnarok and rebuilt the new world.