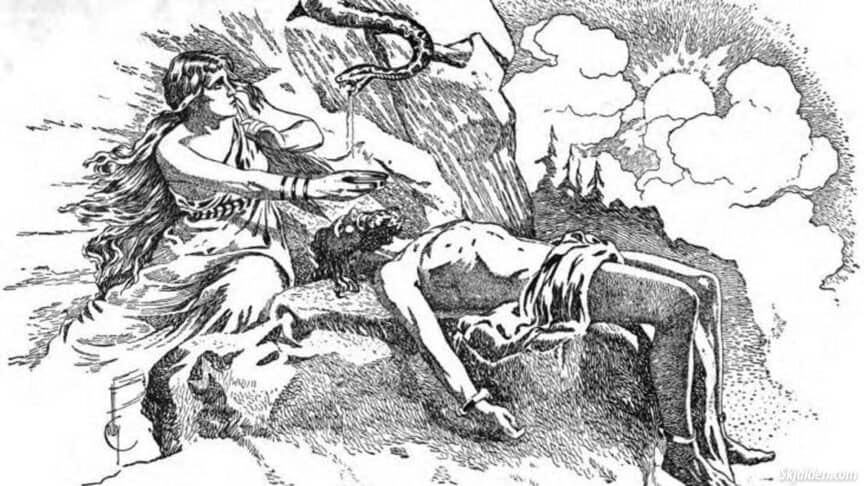 In Norse mythology, Sigyn is an ásynja goddess, her parents are unknown, but it is generally believed that her ancestry is the Aesir. She is not listed as being a goddess of anything, and her name also does not suggest that she has been worshipped or been associated with any form of ritual.

Sigyn is the second wife of the trickster Loki, and together they have the two sons Narfi and Váli. It is in relation to her husband that her name begins to make sense. Sigyn translated from Old Norse means a victorious girl-friend, which there is no doubt about that she is.

When Loki had made one trick too many which resulted in the death of Baldur, the Aesir had finally had enough. Loki was dragged to a cave, where he was bound to a rock with the intestines of his own son Narfi. Skadi placed a poisonous snake above his head, which drips poison onto his face.

Sigyn decided to stay at Loki’s side while holding a bowl over his head, so she could catch as much of the poison as possible. She will stay in this cave until Loki breaks free at Ragnarök.

She is literally the essence of loyalty, and staying at her lover’s side, no matter what. This is a remarkable character trait and is definitely something to look up to.

It is the Icelandic Author Snorri Sturluson who has listed her as Loki’s wife and as a goddess based on the poems Skáldskaparmál and Lokasenna in the Prose Edda.

These poems have many times been translated into English, but it can be difficult to find an Old Norse translation of the Prose Edda that is easy to read and understand. That is why I made a list of the ones I personally have read and that I would recommend on the page about the best Norse mythology books.