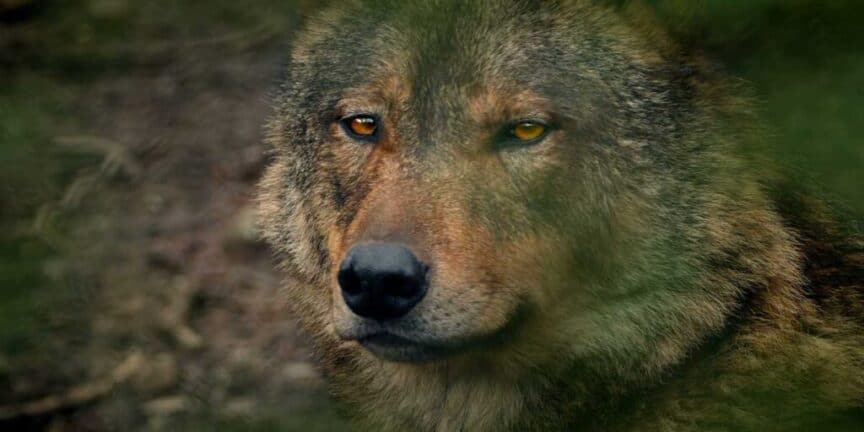 Alsvin (Old Norse “Alsviðr”) is one of the two horses that pulls the Sun’s chariot, it is driven by Sol.

Alsvinder is the horse that pulls the Moon’s chariot, it is driven by Mani.

Arvakr is one of the two horses that pulls the Sun’s chariot, it’s driven by Sol.

Dain is a deer that lives among the branches of Yggdrasil and eats the leaves.

Eikthyrnir is a deer that stands on the roof of Valhalla and eats from the leaves of the great oak tree Laerrad. From the horns drips water, which is where all the rivers in the world come from.

The Fenrir wolf is the son of Loki and the giantess Angrboda, Fenrir is the brother to Hel the Goddess of the underworld and the Midgard serpent. Fenrir is the father of the two wolves Sköll and Hati Hróðvitnisson. It is foretold that Fenrir will kill Odin, at Ragnarök, but the Fenrir wolf will be killed shortly after by Odin’s son Vidar.

The Fenrir wolf was at the beginning kept in Asgard, were Tyr was the only one brave enough to feed him. But when the Gods, saw how quickly and huge the Fenrir wolf grew, from day today. They decided to bind him to an extremely strong leash, so it could hold the Fenrir wolf. The Gods thought that it was not safe, to have him drift-free around in Asgard.

One day the Gods took him to an island in Kattegat and started playing a game with Fenrir to test his strength, to see how easily he could snap the bonds of a rope they bound on him and a huge rock next to him. The Gods came with a leash called loeding and asked Fenrir to try his strength on it. Fenrir did not think that it would match its powers, and let the Gods do as they liked. As soon as Fenrir just stretched his legs, the chain broke. The Aesir then made a leash, by the name Dromi that was twice as strong. And once again they asked Fenrir to try his strength on it and said that he would become very renowned for his strength if such a leash could not keep him.

Fenrir thought about it for a minute, and he thought that his power was so great he would break it as easily as the first leash. As soon as he stretched his feet the leash broke and the pieces flew far away. After seeing this the Gods started to fear, that they may not get Fenrir bound to the rock.

Odin then sent Skírnir the messenger of Freyr, down to the black elves world, to find some dwarfs to make a stronger leash. The dwarfs then made a leash and called it Gleipnir. The leash was as light as a silk ribbon but stronger than an iron chain.

The leash was made of six ingredients:

When the leash “Gleipnir” was brought back to the Aesir in Asgard. They went back out to the lake called Amsvartnir, and sailed to the island Lyngvi, and lured Fenrir with them. They showed Fenrir the leash and asked him to pull it over, and said it was fairly stronger than it seemed like. They handed it to each other and tried to pull it over with their hands, Fenrir would probably be able to break it, they said. But then Fenrir replied, that it didn’t think there was any fame to gain by breaking such small a leash. and if it is made with stealth and fraud, it will not touch my legs.

The Gods then said that he could probably quickly break the leash because he had broken the two other leashes. And if you cannot break Gleipnir, then you will not be able to frighten the Gods and we will no longer see you as a threat, and we will instantly let you go. Fenrir then said if you bind me, so I cannot get free by myself, it will probably take a long time before I get help from any of you. I am very unwilling to let this leash be placed at my feet, but if one of you would put one of your hands in my mouth as a pledge, that this leash is not made with fraud and magic, I will let you bind me to it. The Aesir looked at each other, and now it seemed to them that they were in double trouble, because no one wanted to put his hand into the mouth huge scary wolf.

But then the God Tyr held out his right hand and laid it in between the jaws of Fenrir. Fenrir was then immediately bound to the leash “Gleipnir”. As soon as it was bound Fenrir tried to break the leash, by pulling and stretching his legs, but the stronger he pulled the tighter it became. Then all the Gods started to laugh, except for Tyr, he lost his right hand.

When the Gods saw that Fenrir was securely bound to the rock, they took the leash and bound it to a chain called Gelgja, and pulled it through a hole into a large rock named Gioll. The wolf was furious, and opened his mouth very wide, and wanted to bite them all. So they stuck a sword in his mouth, with the shaft supported against the lower and the upper gum, he started to howl and froth began to run from his mouth. Now he was not able to open his mouth that wide anymore the Gods laughed. Fenrir will stay here and be bound to until Ragnarök. More facts about Fenrir.

Odin’s two wolves are named Geri and Freki. Odin gives them all his food from the table. Odin does not need any food to survive, wine and mead are all he needs to keep him alive. Geri and Freki follow Odin wherever he goes. Geri and Freki both meaning “the ravenous” or “greedy one”

Goldfaxi is the horse of the giant Hrungnir. He lost his horse in a bet, where he raced Odin on his horse Sleipnir.

Gullinbursti is a golden boar made by the two dwarves Brokk and Eitri. Gullinbursti is made from pigskin and thousands of pieces of gold wire. Gullinbursti was given to the god Freyr, the boar is faster than any other horse over water and through the air. Gullinbursti has golden rays that shine like the Sun and made plants grow everywhere. Many warriors wore the image of Freyr’s golden boar Gullinbursti on their helmets and shields as protection and good luck. More facts about Gullinbursti.

Gullinkambi is the red rooster that will crow to the gods and heroes at Valhalla to warn them that Ragnarök has begun.

Gulltopp is the horse of the God Heimdall.

Heidrun is a she-goat who eats the leaves of Laerad, Heidrun produces a never-ending supply of mead for the Gods and heroes at their nightly feats.

Hildisvini is the boar of the Goddess Freya, Hildisvini was made by the dwarves Dain and Nabbi. Frey’s human lover Ottar, took the form of the boar to visit Freya. She rides Ottar around in Asgard, and Loki says it’s the human lover of Freya.

Hrimfaxi is the horse that Nott uses to drive over the sky, in her chariot.

The two ravens that fly over the world, Midgard. The name Huginn means “thought” and Munin “memory or mind” The two ravens fly out over all the world every morning and return every evening. When they return, the Ravens whisper all that they have seen and heard to Odin. More facts about Huginn and Muninn.

Nidhogg is the dragon that lives in Hel in the realm of Niflheim, at the root of the tree Yggdrasil. Nidhogg feeds on the roots of Yggdrasil and the corpses of the dead.

Ratatosk is the squirrel that spends a lot of time each day, running up and down the tree Yggdrasil. Ratatosk does whatever he can, to keep the hatred between the eagle and Nidhug alive. Every time Nidhug says a curse or an insult about the eagle, Ratatosk will hurry up to the top of the tree, and inform the eagle what Nidhug had said. The eagle was equally rude in his comments about Nidhug. Ratatosk just loves to gossip which is the reason why the eagle and the serpent remained constant foes.

Saehrimnir is the boar that each day is killed and cooked by the cook Andhrimnir. It is cooked in the cauldron Eldhrimnir and served to the fallen heroes of Valhalla.

Skinfaxi is the horse that pulls Day’s “Dag” chariot over the sky.

Sleipnir is a gray eight-legged horse, this horse is a magical horse, and the most beautiful of all horses. Sleipnir is the symbol of the wind and can just as easily gallop through the air as on land. The horse has the marks of hell written upon it. Sleipnir was later on given to the God Odin as a gift from Loki himself. More facts about Sleipnir.

Svadilfari is the stallion that belongs to the master builder, who built the walls of Asgard. Loki and the stallion Svadilfari are the parents of Sleipnir.

Their names Tanngniost “Teeth barer” and Tanngrisnir “Teeth grinder” are the two goats, who pull Thor’s chariot. Whenever Thor rides in his chariot, people can hear the noise from the wheels, and see the sparks and lightning from the wheels sent out as they flew across the sky. Some think that the sparks come from his hammer Mjölnir. The people in Midgard call this thunder and lightning. If Thor is away from home, he sometimes cooks the goats. Thor will then resurrect them with his hammer, Mjöllnir the next day. More facts about Tanngrisnir and Tanngnjóstr.