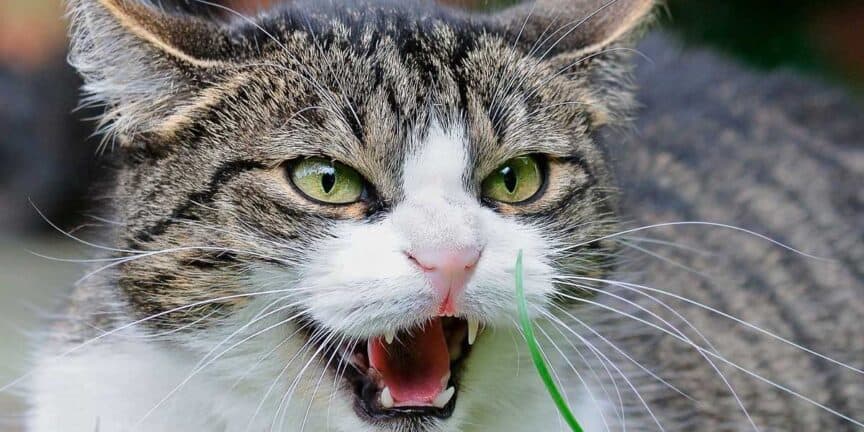 Animals were very important for the people in the Viking age, but they were not separated into two different groups like we see today in our modern society, with one group being seen as just pets and one group being seen as farm animals, they all had a purpose. Of course, some animals were kept as companions, but they still had their uses around the farm. Today, we will take a look at animals that could be considered pets, and next time we will look at the domesticated animals, such as the livestock they had on the farms.

I have always wondered what the connection was between humans and predators, somehow they just seem to become our closest friends, which is the case for many people when it comes to cats. The Vikings also loved cats, but they didn’t just have them so they could cuddle with them at night and hear them purr.

The Vikings primarily had cats in their household because they had valuable skills to offer, especially if they lived on a farm, where there are many rodents such as mice, running around and eating the harvest.

We know that cats were very important to the Vikings, which is also something that we can read about in the old Norse sagas. For example, Freya who is the Goddess of love in Norse mythology rides in a cart pulled by two cats. Freya’s two cats are not the Egyptian cat breed known as Felis catus, which is a small to a medium-sized short-haired cat breed, and probably the most known house cat in our modern society.

The Egyptian cat was known in Scandinavia because they had slowly spread from Egypt and around the mediterranean sea to northern Europe by the Romans. But the Egyptian cat had evolved and adapted itself to a much colder climate.

The cats that are associated with the Goddess Freya is the forest cat (In Norwegian: Skogkatt), sometimes also referred to as the Norwegian forest cat. The forest cat is both larger, more muscular and has a thicker coat, which it obviously needs to thrive in a very cold climate like Scandinavia.

The cat is not really a Norwegian cat breed, it is also known in the rest of Scandinavia, for instance in Denmark it is called a Huldrekat, which means ”hiding cat” and probably refers to the female forest spirits called “huldre” which literally means ”the hidden folk”.

The cats had many uses and there have been found cat farms in Scandinavia from the Viking age, where they used the cats to get fur, but we can not say how far spread these were. The Viking witch known as a Völva has many times been described as having worn cat fur, but again we can’t know if it was all of them who did so.

There is a saying that dogs are a man’s best friend, and that was also true for the Vikings. In fact, there have been found graves from the Viking Age, which has contained both human and dog skeletons. This means that the dogs were loved so much by some of the Vikings that the dogs sometimes would follow their masters into the afterlife.

The dogs were very popular in the Viking age, especially for those who lived on the farms. Dogs on a farm provided, companionship, protection and helped the farmers with moving their livestock around. The Viking dogs can be split into two groups, the hunting dogs, and the herding dogs, both of equal importance. I made a shortlist of some of these dogs, but bear in mind there might be a few others.

Hunting dogs as pets in the Viking age

The preferred hunting dog for the Danes in the Viking age was the ancestor of the Old Danish pointer, in Danish, the dog is called ”Gammel Dansk hønsehund” or literally translated into English, the old Danish chicken dog. The old Danish pointer is a medium-sized dog with white and brown markings, it is a friendly, loyal and an intelligent dog, it is a great dog if you have kids.

The favorite hunting dog for the Swedes was the Jämthund or in English Elkhound. This Swedish Elkhound is a spitz-type, this is a large-sized dog with light grey or dark grey markings, it is very energetic, loyal, and courageous. Because of its size, the Elkhound can be used to hunt mooses or bears.

A dog you might not have heard about is the Norwegian Lundehund which means Puffin dog in English. This dog got its name because of its natural skills in hunting seabirds and puffin birds. The Puffin dog is a very ancient dog, and it is believed to originate from the Lofoten Islands in Norway. The Norwegian Puffin dog is a small-sized dog and can have a wide range of colors from, white, black, sable, grey, red, and yellow. The dog is very energetic, loyal, and protective.

Herding dogs as pets in the Viking age

If we take a look at the herding dogs from the Viking age, we can start by looking the Swedish Vallhund (In Swedish: Västgötaspets). This dog is a small-sized dog with mahogany and greyish colors. The dog is fearless, intelligent, and friendly.

The Norwegian Buhund which littery translated means homestead dog or farm dog. This dog is a very ancient dog, and probably one of the oldest Nordic breeds of dogs. Because the Vikings brought this herding dog with them when they settled in places like Iceland it must mean that it was a very popular herding dog in the Viking age. The dog is a small-sized dog with black or wheaten colors. The dog is energetic, agile and friendly.

The climate and landscape are very different on Iceland than it is in most of Scandinavia. And because of this, the first Icelanders began to breed their own dog which is called the Icelandic sheepdog or Ísländshunden in Icelandic. The Norwegian Buhund might be the ancestor of the Icelandic sheepdog at least, they have some similar trades, which we can see just by looking at their appearances. The dog is a small-sized dog with black and white colors, sometimes it even has a bit of milk chocolate color. The dog is very cheerful, energetic and agile.

Dogs in the Viking age

The importance of a dog can also be seen in the sagas and sources we have available, for instance, in the Norse sagas. In one of these sagas, we can read about the watchdog Garm who guards the entrance into Hel, which is where all the dishonorable people go when they die. But also Odin’s wife Frigg has been depicted on a few occasions as traveling in a chariot drawn by dogs.

We also have evidence of the importance of the dogs from the runestones that have been found throughout Scandinavia from the Viking age. If we take a look at the Tjängvidestenen from Gotland which depicts a fallen warrior arriving into the afterlife. We can see a Valkyrie welcoming him with a cup of mead with the warriors’ dog waiting for him behind in the Valkyrie. So I am sorry to burst your bubble, but there is no such thing as a dog haven, your dog waits patiently for your arrival in Valhalla.

Rare and expensive pets in the Viking age

Pets such as Hawks and Falcons in the Viking age were not something for the common people, they were expensive and something that only the rich could afford. Hawks and falcons were captured and exported from Norway to other parts of Europe, they were probably sold in trade towns such as Ribe (Riba) or Hedeby (Haithabu) in Denmark.

When the first settlers came to Iceland they caught the sparrow hawk and sold it to Danish merchants, who might have traveled further south to resell it in Francia or maybe even in Constantinople in the Byzantine empire.

One of the most expensive falcons that were caught in the new lands, was a Gyrfalcon from Greenland. This falcon was called the bird of kings, and was sold for enormous sums of silver, and would have been a very rare bird to own.

Falcons are also mentioned in the sagas, for instance, the Goddess Freya had a cloak made from Falcon feathers which she on one occasion borrowed to the trickster Loki.

Since the Vikings often traded with people around the mediterranean sea, they also purchased exotic animals and brought them back home. One of these animals that were imported was the peacock, we know this because there was found a peacock skeleton at the Oseberg Viking ship burial mound, that was excavated in 1904.

Bears were pets in the Viking age

Most of the animals that I have mentioned so far has been rather harmless, and pets that probably doesn’t really come as a surprise to you that someone would own. But what would you say to have a bear as a pet? And that was in fact, something that the people had in the Viking age, and you did not even have to be rich to own a brown bear (Ursus arctos) as a pet, they were rather common and they were even called house bears.

People of the upper class such as Kings and the very rich people preferred to have a polar bear (Ursus maritimus) as their house pet. The polar bears started to arrive on the shores of Scandinavia in the 9th century. It was Ingimund the old who brought the very first polar bear to Europe, and he gave the polar bear as a gift to the King of Norway.

When the first settlers moved to Iceland, they did of course also bring their beloved bears along for the ride, and it might have been because they could not stand the thought of living without their big soft teddy bear.

However, the import of bears to Iceland became illegal after they started to create too many problems for the locals. Some of the owners would even use their bear to attack other people or their property if they had a disagreement with. Since it was the bear and not a person who was responsible for the attack, the owners would only get a fine, but the fines for this crime were rather large.