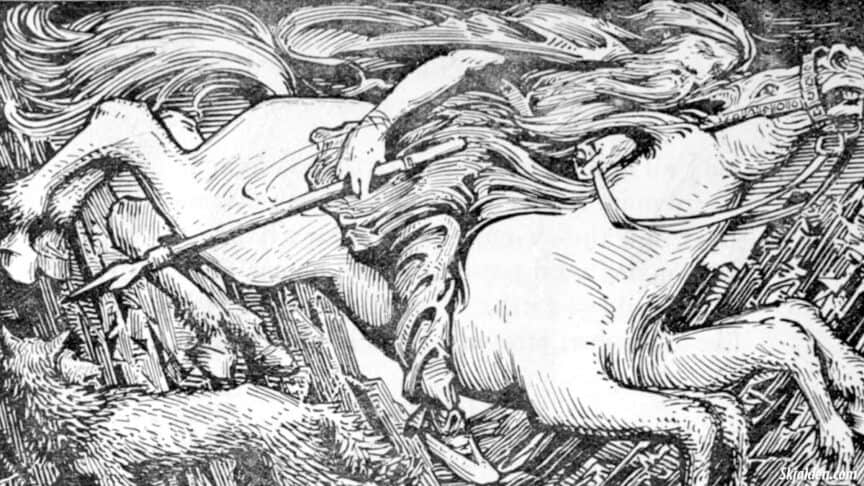 Sleipnir is so fast that when it runs it looks like it is sliding through the air. The name Sleipnir derives from Old Norse, and it means slippy or the slipper.

Sleipnir is described as the best and fastest of all horses, with the marks of hell written upon it. Because of its speed, the horse can be associated with the symbol of wind.

It is based on the poems, Grímnismál, Sigrdrífumál, Baldrs draumar, and Hyndluljóð, from the Poetic Edda, and Gylfaginning from the Prose Edda that we know the details about this horse, as always sources are in the bottom of the page.

Sleipnir was conceived with the use of shamanism during the establishment of Asgard’s fortification. According to the poem “The Building of Asgard’s Wall”, it was Loki who turned himself into a mare in order for the stallion Svaðilfari to impregnate him.

This was not something Loki did because he always wanted to become the mother of a horse. It was one of Loki’s many tricks to avoid getting punished by the Aesir.

It all started 18 months earlier when the jötunn (giant) going by the name “the builder” offered the Aesir to build a wall around Asgard that would be so tall and strong that no one would ever be able to break through the wall.

The deal was made in the form of a bet, if the builder were able to finish the wall under 18 months, then he would get the sun, the moon, and the goddess Freya as a reward, but if he failed he would get nothing.

Loki influenced the bet between the Aesir and the jötunn, which resulted in the builder being allowed to use his stallion Svaðilfari for the project. Therefore, it was Loki that was blamed when the builder was almost finished with the wall three days early.

To avoid getting punished, Loki then came up with the plan to turn himself into a mare to lure the stallion away from the wall and into the forest. Because Loki was a mare and the stallion was very excited about it, it had the unforeseen consequence that Loki ended up becoming pregnant.

Because Loki shapeshifted into a mare with the use of shamanism, it may have been under its influence when Sleipnir started to take shape in the uterus, which could be the reason why it became deformed with eight legs.

Sleipnir’s eight legs can be interpreted in numerous ways, the horse could literally have eight legs, but the additional legs could also have been a pictorial method to easily convey that the horse was very fast when the sagas were told around the fire.

In the saga of Baldur’s dream, Odin used his horse Sleipnir to ride down into Hel to visit a Völva which is a female Norse seeress, to ask her advice on his son Baldur. Follow this link to read more about a Völva.

After Baldur dies, Hermod uses the horse to ride down into the realm of Helheim to bring Baldur back from the dead. At the gates of Hel, Sleipnir shows its amazing jumping abilities when it with ease jumps over the walls of Hel.

In Skáldskaparmál in chapter 17, Odin makes a bet on his life with a jötunn named Hrungnir, that no horse is faster than Sleipnir. Hrungnir accepted the bet and used his horse Gullfaxi in the horse race.

Gullfaxi is described as being just as fast on land, in the air, and on the water, but not as fast as Odin’s horse Sleipnir. The name Gullfaxi means Golden mane, which is a good indication of its color. Gullfaxi was given as a reward to Thor’s son Magni for helping his father from being strangled.

J.R.R Tolkien was a big fan of Norse mythology, and he was influenced by the Norse sagas. It is possible that the horse Shadowfax from Lord of the rings was inspired by Odin’s horse. Shadowfax is described as being silvery-grey in daylight, and hardly visible at night. According to the Lord of the rings, Shadowfax is the lord of all horses in Middle-earth and rides faster than the wind. The word “middle-earth” is literally translated into Midgard in all of the Scandinavian languages.

Sleipnir has been depicted in the marvel comics, all through, he is rarely made use.

Sleipnir has been used as a mount in multiple versions of the video game Final Fantasy.

The world’s biggest crane vessel has been named after Sleipnir.