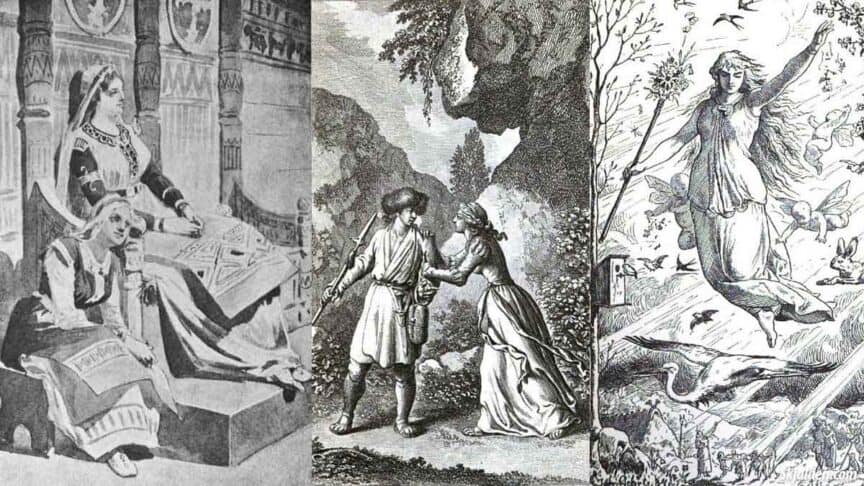 She is a Goddess and or a Valkyrie she is associated with the medical skill.

Fulla is wearing a golden snood and she is the maiden of Frigg, she is tending to the footwear and the boxes of Frigg, but she is also her trusted messenger and Fulla also knows all the secrets of Frigg, because she trusts her with everything.

She also runs errands in other worlds for Frigg, she sents Hlin, when there was something or someone she wanted to protect.

She is a Goddess, but not much is known about her.

She is a Goddess, but not much is known about her.

Lofn: The Comforter, The Mild

Lofn is one of the daughters of the dwarf Hreidmar. She had one sister Lyngheid and 3 brothers Fafnir, Regin, and Otr. Lofn means “the comforter”, “the mild”, or “loving”. Lofn is gentle in manner and an arranger of marriages, if they had been forbidden.

Nanna is married to Baldur; and the mother of Forseti. Nanna died of grief after the death of Baldur, the Gods then placed her on the boat with Baldur and set it on fire.

She is a Goddess and may represent earth.

Rind is the daughter of Billing “King of the Ruthenians”. Rind and Odin have a son named Vali.

Saga is a Goddess she lives in Sökkvakkr “Sunken Bank”, “Sunken Bench” or “Treasure Bank” in Asgard.

She is a Goddess and very eager to turn people’s minds, both men and women into lovemaking.

She is associated with wisdom and is very smart.

Syn is the guardian of Frigg’s great hall, Sessrumnir. Syn is also a Goddess associated with defensive refusal.

Thrud may or may not have been a Valkyrie, but there is a Valkyrie with the name Thrud. She is the daughter of Thor and Sif. She is the half-sister to Magni and Modi.

Var is a Goddess associated with oaths between men and women. Var will also punish those, who broke their vows.

Vor: The Careful one

Vor is very wise and she searched out all things so nothing was hidden from her. Vor also has the gift of Providence, and of preparing well for the future.