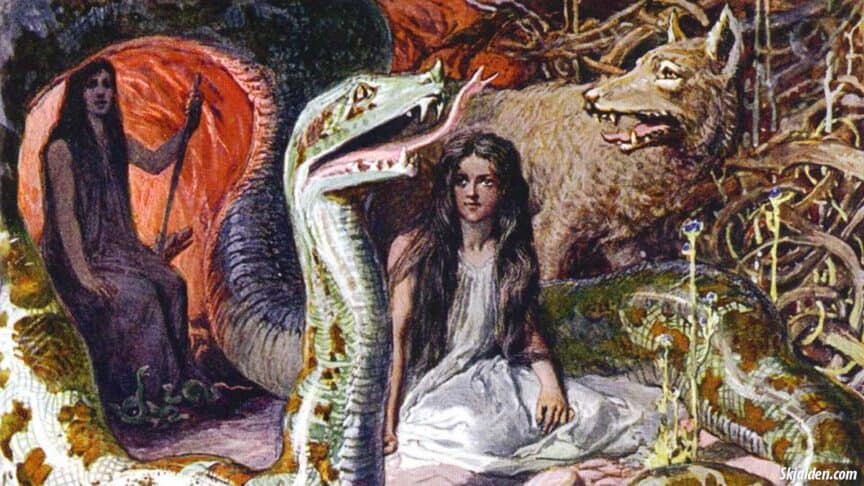 In Norse mythology, Angrboda (Old Norse: Angrboða) is a jötunn and the mother of Loki’s hideous three children. The name Angrboda means “The one who brings grief” or “She who offers sorrow”.

It is believed that she lives by herself in Jötunheim (the land of the giants), and she most likely has no contact with Loki or their children. Angrboda’s children are quite literally monsters, and none of them are even remotely similar to the other.

According to the first part of the Prose Edda by Snorri Sturluson, The Beguiling of Gylfi, her three children are the Fenrir wolf, Jörmungandr, and Hel, the queen of the underworld.

They are some of the evilest creatures that have ever existed, and it is said that they will spread great pain and destruction across the nine realms.

When the Aesir (Norse gods) heard that Loki and Angrboda had brought such hideous and dangerous creatures into existence they were furious.

Hel was banished to live in Helheim, one of the nine realms in Norse mythology which she made into her own domain. Jörmungandr is also known as The Midgard Serpent was thrown into the sea, where it eventually grew so huge that it was able to surround the entire planet and bite its own tail.

The Fenrir wolf was first brought to Asgard, but when they realized that they could not control it, it was brought to an island where it was bound to a rock with a magical rope that was made by the dwarves.