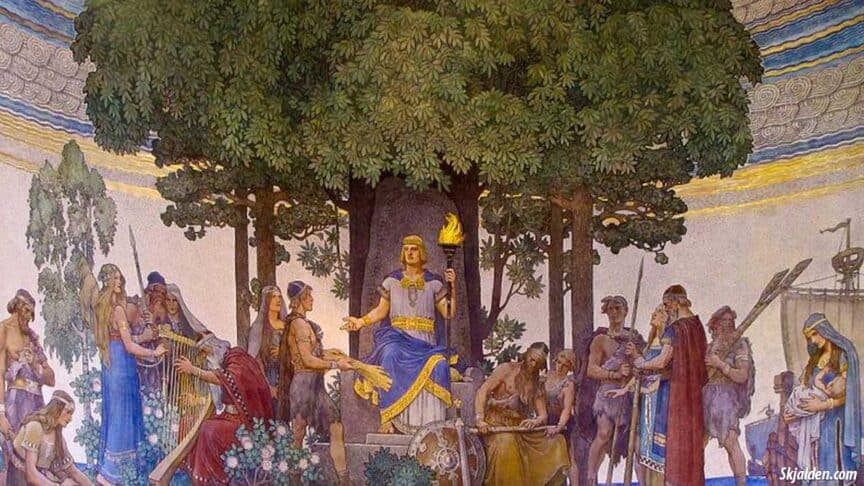 In Norse mythology, there are two branches of deities, the Aesir, and the Vanir. The Aesir is the faction of gods and goddesses that we know the most about, and the few pieces of information that we do have about the Vanir, are all mentioned in the sources in relation to the Aesir.

The two branches used to be rival factions, which eventually resulted in a war, known as the Aesir-Vanir war. At the end of the war, the two sides exchanged gods that had to live among the others as a token of peace.

The two Vanir gods Freyr and Njord, and the Vanir goddess Freya were sent to the Aesir, while Honir and Mimir were sent to the Vanir. It should be said that Mimir was beheaded during the war by the Vanir, so they were probably glad to get rid of him.

The two branches of gods and goddesses each have their own separate realm which hangs on the world tree Yggdrasil. The Aesir lives in the realm of Asgard, and the Vanir in the realm of Vanaheim.

The highest of the gods and probably also the most known god is called Odin, he is the ruler of all the Aesir, and he is married to the beautiful Frigg, who is the queen of Asgard.

The Norse gods are very unique because each of the deities has their own character traits, for instance, Thor who is quick-tempered, or Freya who always seem to be on the lookout for a new piece of beautiful jewelry. Loki who seems to love more than anything to ruin the day for others, Loki is, however, not really a true god, at least not full-blooded, but he could be called a demi-god.

Idunn and her apples of youth that keep the gods and goddesses from dying from old age, and let us not forget about the beautiful Baldur, he is loved by all, maybe even Loki, although he did cause him to die.

They also have their own associations, and they are the god or goddess of certain things, this often overlaps with each other. For instance, both Odin and Týr are called the god of war.

The gods and goddesses do not stay in heaven as they do in some religions, they interfere all the time with humans’ affairs, but also with other beings such as the jötnar (giants), and the dwarves.

Our ancestors in Northern Europe, most likely had their own favorite deity, depending on their personality, or time of the season. We know for a fact, that some clans worshipped some more than others. Farms, towns, and the names of certain places reflect that through the north, for instance, the city Odense is named after the god Odin. The legend is that Freya and Odin once flew over the isle of Fyn when Freya looked down and said “Odin See” (Odense).

The worshipping of the god and goddesses didn’t die 1,000 years ago, many people are still joining this growing polytheistic religion. The name of the religion seems to vary a bit from place to place, but in Scandinavia, it is called Ásatrú.