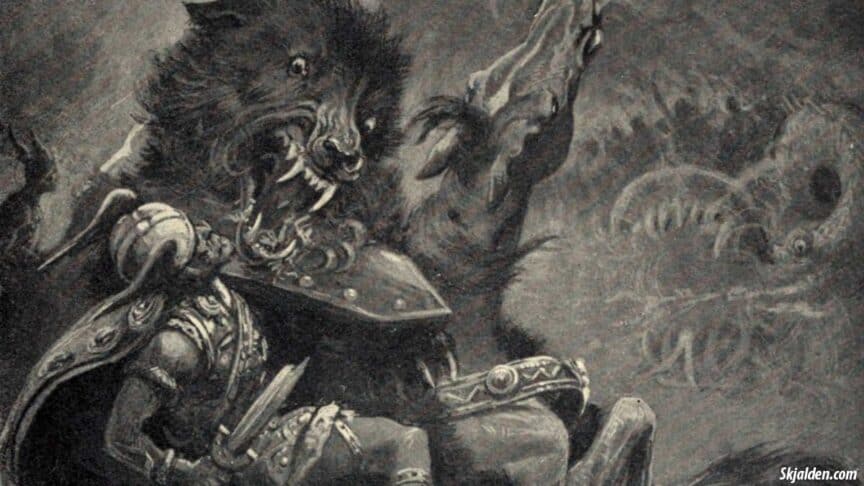 The Fenrir wolf (Old Norse: Fenrisúlfr) is one of Loki and Angrboda‘s three children in Norse mythology. Fenrir has two siblings, Hel, who is the queen of the realm Helheim, and the giant serpent Jörmungandr. The wolf is also called the Fenris wolf, for instance, in Danish, it is called “Fenrisulven”.

The name Fenrir can be translated into “He who dwells in the marches”.

Fenrir is the father of the two wolves Sköll and Hati Hróðvitnisson, who will spend every second until Ragnarök chasing the sun and the moon across the sky. They will eventually catch them at Ragnarök, and the world will turn into darkness.

According to the Old Norse sources, Fenrir was bound to a rock on an isle named Lyngvi somewhere in Kattegat. However, there is no isle with that name anymore, therefore, his location can only be narrowed down to approximately 50 possible islands, excluding some very tiny isles where for the most part only birds live.

When the wolf was young, unlike its siblings, it lived in Asgard together with the Aesir. But the wolf grew so fast and began to get too big to handle so they decided to bind it to a rock on a remote island. This occurrence is attested in the saga “The Binding of Fenrir” by Snorri Sturluson in the Prose Edda, Gylfaginning chapter 35.

The Aesir brought Fenrir to an island in Kattegat (the strait between Denmark and Sweden). They wanted to bind it to a rock, but the wolf was not stupid and was not easily tricked, so they decided to play a little game to test its strength.

They showed Fenrir a leash called Loeding and asked him if he would allow them to test his strength by binding him to a rock. The wolf did not seem to mind, and as soon as he stretched his legs, the chain broke.

The Aesir then brought forward another leash by the name Dromi, this leash was twice as strong as the first one. The gods then told him that if he could break this leash he would be very renowned for his strength in all the nine realms. Fenrir gave them permission to bind him to the rock again, but just as the first time, as soon as he stretched his feet the leash broke, and the pieces flew far away. After seeing this the gods began to get worried and feared that they may never be able to get him bound to the rock.

Odin then decided to send Freyr‘s messenger Skírnir into the mountains to ask some of the dwarves to make them a stronger leash. Odin knew that if anyone is going to make a leash that will hold Fenrir then it will be the dwarves who are the world’s best craftsmen.

Deep inside the mountain, the messenger eventually found some dwarves that would be willing to make them a leash.

Unlike the two others that were heavy, this one was as light as silk but stronger than an iron chain.

This leash was called Gleipnir, and it was made with six very unusual ingredients.

The messenger brought Gleipnir back to the gods, who then showed it to the wolf and began to persuade him to let them bind him to the rock. The gods began to hand it to each other and tried to break it by pulling it.

They began to mumble to each other, this is too strong for me, but if anyone can break it, then it will definitely be Fenrir. The wolf then looked at the gods, I don’t think there is any fame to gain by breaking such a small leash. I also suspect that it is made with stealth and fraud, and if that is the case, it will not touch my legs.

The Aesir continued to persuade the wolf, you could probably break that leash in a heartbeat, you just broke the two others that were made from iron chains. But if you should fail to break this leash, we will just set you free again, because then you will no longer be able to frighten us any longer.

The wolf continued to be skeptical, if I cannot get free by myself, I doubt any of you will release me again. Therefore, I am not willing to let you bind this leash to my legs unless one of you will place one of your hands in my mouth as a pledge, that this leash is not made with seidr “magic” (Old Norse: seiðr).

The Aesir looked worried at each other, who would be brave enough to do such a thing? But then the god Týr held out his right hand and said I will do it, he walked over to the wolf and placed it in the wolf’s mouth between its huge and sharp teeth.

The gods would not let this moment pass, and immediately bound the leash Gleipnir around Fenrir’s legs and then to the rock. As soon as they had tied the knot, the wolf began stretching and pulling, but the stronger he pulled the tighter it became. Then all the gods started to laugh, except for Týr, who lost his right hand.

Just to make sure that the wolf would never break free again, they bound the leash to a chain called Gelgja and then pulled it through a hole into the large rock called Gioll. Fenrir had now entered a furious state with foam around its mouth, he opened his mouth and began to howl and tried to bite them, but the leash kept him at distance.

One of the Aesir then pulled out his sword and pierced it through Fenrir’s lower jaw until it hit the upper gum, which made the wolf unable to open his mouth again. The gods began to walk away while laughing at the wolf, now he was no longer a threat.

It is Fenrir that will kill Odin at Ragnarök, but his son Vidar will avenge his father’s death. Odin already knows that this will happen a Völva has foretold him the future in a prophecy. This is one of the many reasons why Odin is always in pursuit of knowledge, maybe in the hopes that he can somehow change it.

In the Prose Edda, Gylfaginning, chapter 51. After Fenrir’s son, Sköll has swallowed the sun, and Hati Hróðvitnisson has swallowed the moon, the stars will vanish from the sky. Huge earthquakes will erupt, mountains will collapse, trees will be teared up by their roots, and all chains will break, and the Fenrir wolf will be free.

Fenrir will set a course for the field Vigrid (Old Norse: Vígríðr), where it will meet up with its siblings to fight the gods. While walking towards the doom of the world, Flames will burn from his eyes and nostrils, and its enormous mouth will be wide open, the lower jaw will touch the earth, and the upper jaw will touch the sky.

During this final battle, Odin (Old Norse: Óðinn) will fight Fenrir, which will result in his death when Fenrir shallows him. Vidar will avenge his father by placing his legendary shoe in its mouth, and one of his hands on its upper jaw, resulting in him tearing the wolf’s jaws apart.

In 2013, the Fenrir wolf was released as a playable character in the MOBA game SMITE.

The Fenris wolf is also part of the Marvel universe and it has been featured as a character in Thor: Ragnarok (2017).

In the book Beren and Lúthien (2017) by J.R.R Tolkien, the wolf of Angband, named Carcharoth, is clearly an inspiration of the Fenrir wolf.

In the video game Northgard from 2017 by Shiro Games, players can choose to play as the Fenrir clan.