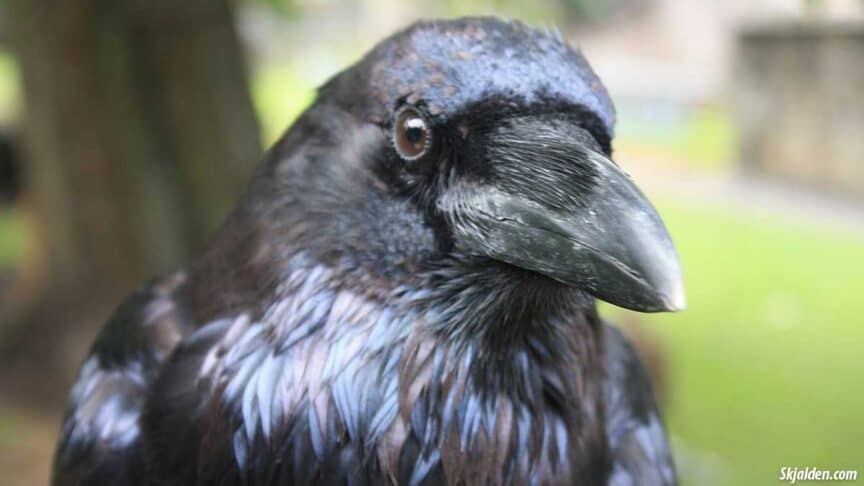 In Norse mythology, Huginn and Muninn are Odin’s two ravens. Huginn is the old Norse word for “thought” and Muninn is the old Norse word for “memory”. Every morning at sunrise he sends them off to fly throughout all of the nine realms to gather information on what is happening. In the evening they return to Odin in Asgard and tell him everything that they have seen and heard.

Huginn and Muninn are very close to Odin, in fact, so close that according to the Prose Edda by Snorri Sturluson he is referred to as the raven god (Old Norse: Hrafnaguð). His close relation to the ravens could mean that they are a personification of himself.

Odin is known for being very knowledgeable within Seidr (Old Norse: seiðr), which is a Nordic form of shamanism. In shamanism it is quite common to take the form of an animal, this could, for instance, be in the form of a ritual, such as gathering knowledge.

Another example of why Huginn and Muninn could be his own personification is the stanza from the poem Grímnismál in the Poetic Edda.

Huginn and Muninn
fly every day
over the vast earth.
I fear for Hugin
that he won’t return,
though I fear more for Munin.
– The Lay of Grimnir. 20

This part could on the surface indicate that he is worried if his ravens will return. However, it could also have a deeper meaning, and Odin might be worried about his own memory. He has a tremendous amount of knowledge, and he might be afraid to forget some of it, maybe because of age. This stanza could also highlight his worry about the risks of entering a shamanic trance-state journey on a daily basis, especially when being split into two animals.

One of the common symbols of Odin is the raven, some clans in Scandinavia had such a strong connection to him, that they used the raven on their war flag. This is known as the raven banner, and there have among others been found depictions of it on the Bayeux tapestry.

Another raven name for Odin is the “raven sacrifice god” (Old Norse: Hrafnblóts Goði). This name for Odin is a poetic way of explaining that the fallen warriors in a battle would go to Valhalla. It is Odin who decides who dies in a battle, but it is Freya who has the first pick among the slain.

If a ritual was conducted in honor of Odin, either by sacrificing a human or an animal. Then people were of the belief that if they saw a raven immediately after, then he had accepted the offering.

According to the Norse language expert Jackson Crawford, the ravens can be spelled both as Huginn and Muninn and Hugin and Munin in English.

Huginn and Muninn
fly every day
over the vast earth.
I fear for Hugin
that he won’t return,
though I fear more for Munin.
– The Lay of Grimnir. 20