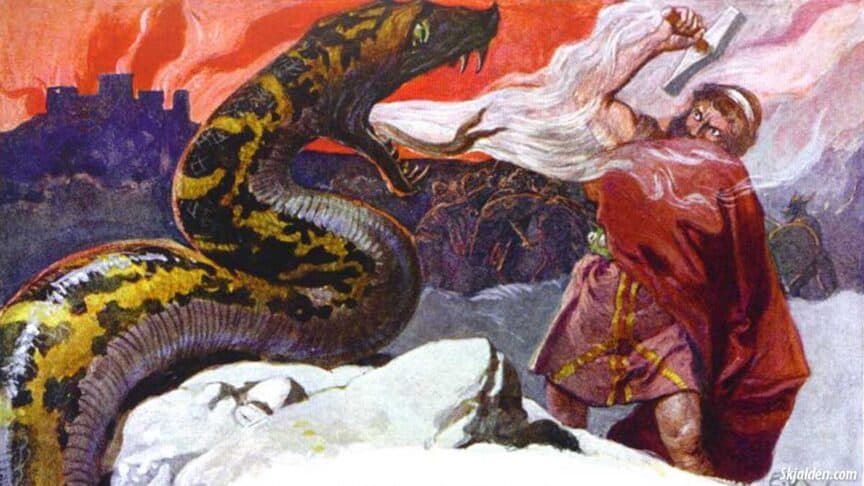 In Norse mythology, Jörmungandr is the feared monster that encircles the realm of Midgard. It is one of the three children of Loki and Angrboða, the other two are Hel and the Fenrir wolf. Jörmungandr was not always this big, once it was so small that it could be held in the hands. It was Odin who saw the danger of Jörmungandr and threw it down into the sea, where it learned to thrive and eventually grew so big, that it surrounded the entire earth, so it could bite its own tail.

Jörmungandr is not attested as being a god in Norse mythology, it is nothing more than one of Loki’s horrible children that wreak destruction upon the world.

Jörmungandr is also called the Midgard Serpent, in Denmark where I am from, we call it (Danish: Midgårdsormen), which when literally translated into English means the Midgard Worm.

It was the Icelandic author Snorri Sturluson who first made use of the word Midgard Serpent (Old Norse: Miðgarðsormr). The name Jörmungandr (Old Norse: Jǫrmungandr) which can be translated into “giant monster” was used in earlier texts such as the Poetic Edda.

Jörmungandr as a cat

Thor was challenged to three feats. The first was a drinking contest, where he had to empty a large horn full of mead. Thor thought that he was drinking mead from the horn, it tasted like mead, but because Utgard-Loki was skilled in the art of seidr (Old Norse: seiðr), he was tricked into drinking water directly from the ocean. Thor eventually failed after three large gulps, but he still drank so much that the sea level dropped.

In the second feat, he was challenged to lift a large gray cat, this was another one of Utgard-Loki’s illusions, for you see, this was not really a cat. For Thor, and everyone else in the hall it looked like a cat, but it was Jörmungandr. No matter how Thor tried to lift it, the cat just kept arching its back, and he eventually failed the challenge. However, he was able to lift one of its paws, which struck fear into the heart of every jötunn (giant) in the hall.

At this point Thor was extremely angry, he wanted a real fight. It was at this point that Utgard-Loki called in a very old woman named Elli. In this final challenge, he wanted Thor to wrestle with this old nurse, but no matter how much Thor tried to bring her down, it just got more difficult, and he became weaker and weaker. This was another one of Utgard-Loki’s illusions, Thor was, in fact, fighting Old Age (Elli, in Old Norse, means “old age”), and no one can defeat old age, not even Thor.

Thor’s first real encounter with Jörmungandr happened on a fishing trip with the jötunn Hymir. Thor had brought a large ox head along as bait because he wanted to catch something really big. Hymir took him out to one of his favorite spots, where he had caught whales before. But Thor wanted to go farther out to sea, Hymir tried to object but Thor just wouldn’t listen.

Out at sea, with no land in sight, Thor put the large ox head on a hook and threw it into the water. After a while, Jörmungandr bit the bait, and Thor pulled it up to the surface. At the sight of Thor, it immediately tried to escape, it began to twist and turn, which caused huge waves, but Thor had a good grip and just wouldn’t let go. While Thor was struggling with Jörmungandr, Hymir’s face turned completely pale with fear and he tried to hide in the corner of the boat.

When Thor was just about to grab his hammer Mjölnir to kill the serpent, Hymir had managed to gather enough courage to crawl over next to Thor and cut the fishing line. The serpent sank and it disappeared into the depth of the sea.

At Ragnarök, Thor and Jörmungandr will meet again, this will be the final battle between them. The serpent will be emerging from the sea and fight Thor at the beaches of Vigrid.

This will finally be the day that Thor kills Jörmungandr, but he will fall to the ground and die from the poisonous wounds after walking nine steps away from the corpse. Jörmungandr’s two other siblings, including its parents, will also perish on this day.

In recent times, it seems that the word Jörmungandr is becoming the mainstream term, which a Google search clearly will show. Jörmungandr has been used in the video game God of War (2018), Final Fantasy XV (2016), and the manga series Yorumungando (2012).

If we take a look at the influence of Norse mythology in Denmark, then the animated film Valhalla from 1984 by Peter Madsen deserves to be mentioned. He has also made a comic book under the same name.

It is great when others get inspired by my culture, and use it in a modern context, I think it helps to keep a culture and the knowledge about it alive. This may also lead some people to seek out more information about Jörmungandr or Norse mythology in general, and that could be the reason why you decided to visit this page.