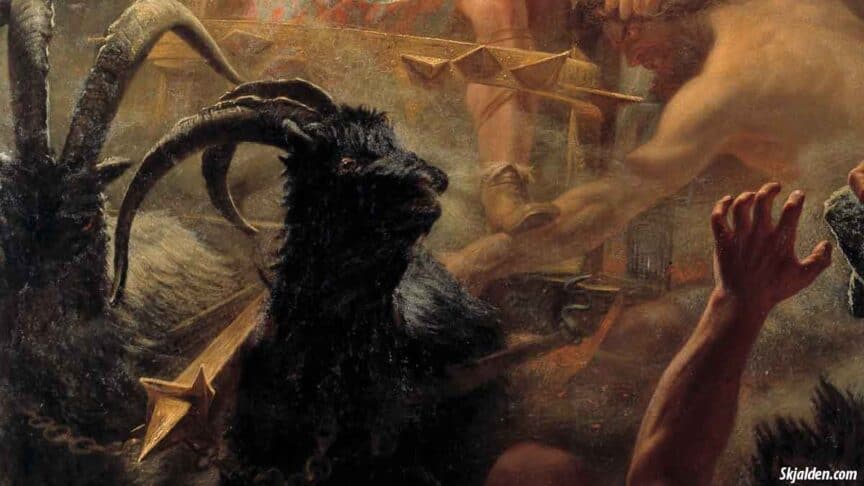 Others always know when Thor is about to arrive. Because when the chariot moves, sparks and lighting erupt from its wheels, and the sound of thunder and the blue lightning sky can be seen and heard from far away.

While Tanngrisnir and Tanngnjóstr are Thor’s trusted goats, they can still end up on the dinner table if nothing else is available. This can be read in the saga of Thor’s journey to Utgard in the Poetic Edda.

At the beginning of the journey, Thor and his companion Loki decide to stop at a farm in Midgard to stay for the night. The farmer and his family were very poor, and they could not offer any food to Thor, who has been known on more than one occasion to eat an entire ox.

Therefore, Thor decided to kill his two goats and cook them for dinner. Everyone was allowed to eat, but only on that condition that they did not break any of the bones, and that they would throw all the bones onto the skin on the floor.

During the meal, the trickster Loki, who is always up to no good, convinces the boy Thjalfi (Old Norse: Þjálfi) to break one of the bones and suck the sweet marrow out.

The next morning, when Thor brought the skin outside and had revived the goats. He noticed that one of them was limping, Thor got furious and demanded to know who had snapped one of the bones.

Thjalfi admitted that it was him, and as a punishment, he and his sister Röskva became the servants of Thor and his family. It is unknown which of the goats was hurt, or if the limping became permanent.

We know that animal sacrifices were common in Scandinavia and that it was conducted in a religious context. These shamanic practices were called blóts, and they were held on certain days throughout the year. One of the biggest of these blóts is jólablót, which means the Yule sacrifice.

This was the most important holiday of the year, where everyone was expected to eat and drink. If you are interested in knowing more about Yule, then I would like to recommend my very in-depth article about the origin of Yule.