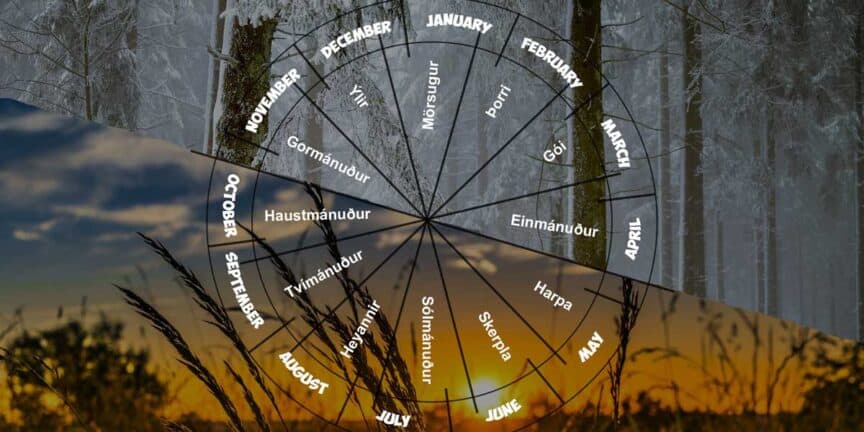 The Vikings did not have four seasons as we do today, they only had two seasons, summer and winter. The year was also not divided into months as most countries do today by using the Gregorian calendar, which was introduced in October 1582 by Pope Gregory the XIII (13).

The Vikings had a lunar calendar which means they counted the months from new moon to new moon or full moon to full moon. The word month is actually still referred to as the moon in Scandinavia, which in Danish is called ”måned”. But other countries in Europe also refer to the word month as the moon, for example in Germany it is called Monat.

While the moon was very important to the Vikings to keep track of time, it was in fact the sun that had a more central role. This is because it is mostly cold and dark in Scandinavia, and the sun is not only the bringer of light but also life. It is when the sun is high in the sky that it is possible to work the land to grow crops.

Names of the months in old Norse

The first winter month is called Slaughter or butcher month, and on the first day of this month, a feast is held called Winter blót. This feast is to honor the God Freyr, and thank him for the harvest.

The second winter month is called Yule month probably one of the most known months. One of Odin’s many names is Jólnir which comes from the word Jól which means he is associated with this month. This is also the time of year was Odin is traveling around Midgard more than usual visiting the locals. The children will fill socks with hay for his horse Sleipnir, and Odin might give them a small gift in return. The Yule month is also connected with fertility and according to the folklore it was linked to earth cultivation.

The third winter month is associated with the word fat, probably animal fat. Some call it Bone Marrow Sucking month. This is the month winter solstice is held, and it mostly falls on December 21st.

The fourth winter month is called Thorri and is were the feast Torrablot is held. The night before the Thorri months begins, the woman of the house will walk outside and welcome Thorri inside as a guest. It is possible that Thorrir was some kind of winter spirit or supernatural being. This month is also the month of the men, and any man could choose a day to be celebrated, but if he chooses a day that had bad weather, it could be seen as a warning for him, for things to come. In Iceland, this is still celebrated, and what I can understand it is more or less a private event held for friends and family.

But some restaurants in Iceland will serve you the traditional dishes at this time of year, but you will probably need to have an iron stomach. Unless dishes like sheep heads, rotten shark, ram testicles, meat jelly made with meat from a lamb’s head, sounds like a lovely meal. Everything, of course, washed down with the seasonally Thorri beer and many shots of brennivín also known as the black death and is a distilled brand of schnapps that is considered Iceland’s signature liquor.

The fifth winter month might have been associated with the daughter of Thorri, and there might have been held a Gói blót this month, but that is unclear. This month is also known as women’s month.

The six and last winter month is called one month, its the month dedicated to the boys.

Harpa is the first summer month, this is the month was the 3rd biggest blót is held, called summer blót. This feast is more or less a feast for the God of war, Odin. This blót is held to ensure victory in war and happiness on their travels. Harpa is a woman’s name and therefore the month is dedicated to the girls. The name Harpa is still being used in Iceland today.

The second summer month is named Skerpla, and it is a woman’s name, but it is unclear what the origin of the name is, the name Skerpla might refer to growth.

The third summer month is called sun month, and it is the brightest time of the year in Scandinavia. It is also in this month the summer solstice is held, it mostly falls on June 21st.

The fourth summer month is called haymaking, which is the month of drying and harvesting of hay, in some parts it is also called worm’s month.

The last summer month is called harvest month. As you can see, it is very clear to us that according to the names of the months, the Vikings were mainly farmers who were very dependent on the weather. The dates will also vary from year to year since it is a lunar calendar.

The last summer month is called harvest month. As you can see, it is very clear to us that according to the names of the months, the Vikings were mainly farmers who were very dependent on the weather. The dates will also vary from year to year since it is a lunar calendar.

The Vikings didn’t count the years as we do today, they counted the years after special events. This could, for example, be ”Two years since the battle of Paris”

Days of the week in old Norse

Today most of the days of the week are associated with the Nordic Gods, not all, but most of them.

The Vikings worshiped the sun so much because of the cold climate, that they gave the sun its own day, and the first day of the week, Sunday. On many runestones and jewelry, there has been found depictions of the sun, these depictions are called ”solhjul” or in English sun wheel. Anyone who lives in a cold climate or has been there will understand why the sun was so important to the Vikings.

The Moon also was important to the Vikings since it helped them keep track of time, it had its own day, Monday. Today in Denmark the day is called ”Mandag” and in our neighboring country, Germany the day is called Montag which comes from the word mond.

The God Tyr is associated with the day Tuesday and in the Scandinavian countries, Denmark, Norway, and Sweden, this day is called Tirsdag, so Tuesday is Tyr’s day.

The modern word “Wednesday” is named after Odin and it comes from the Germanic word Wotan which means “Odin” so Wednesday is “Odin’s day”.

Friday is either named after Frigg or Freya, the reason why it is unclear is that of conflicting sources. This is probably because some areas worshipped Frigg more than Freya and vise versa.

Saturday is not as I have heard some people claim “Loki’s day”. There is absolutely no source to back this up. However it was and many historians agree, that in the Viking age the Vikings called Saturday for, Laugardagur. This is still what they call it in Iceland, although I am not Icelandic so the way I pronounced it, is probably not accurate. But here in Denmark, we call it Lørdag. The name means bathing day or literally translated pool day. The Viking was actually pretty clean and not just some dirty barbarians, they probably had better hygiene than other societies in that time period.