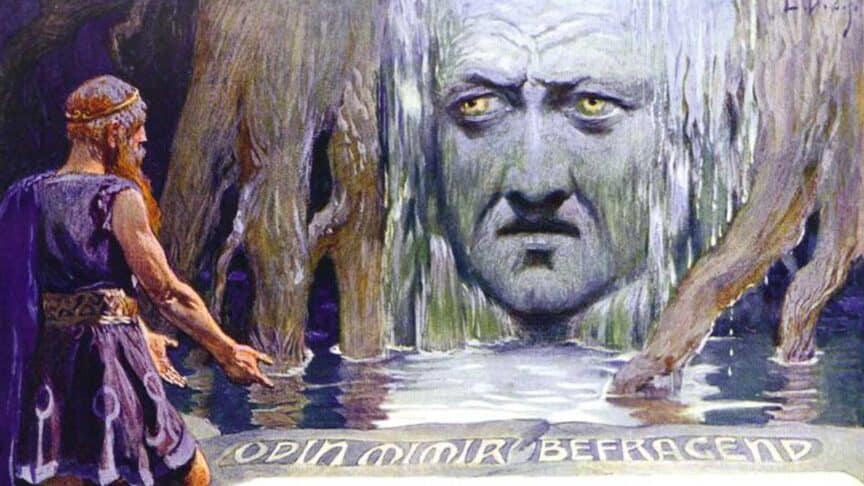 One of the wisest gods in Norse mythology is Mimir. His knowledge is tremendous, and it may even outstrip that of Odin. The name Mimir means the rememberer or memory, which is a clear indication of his vast knowledge. He is the son of the jotünn Bölþorn, and he has a sibling named Bestla, who is married to Borr.

After the Aesir-Vanir war, he was beheaded by the Vanir and his body was left to rot in the wilderness, his head was sent to the god Odin.

Odin attempted to preserve the head by embalming it with special herbs while chanting magical songs (Old Norse: Seiðrhljóð), but he did not attach the head to the decaying body. He succeeded, and the life force of Mimir drew back into his decapitated head which Odin was still holding in his hands.

Odin brought him back to his hall in Asgard, where Mimir eventually ended up guarding his own well Mímisbrunnr.

He spent countless hours walking back and forth with Mimir’s head in his hands asking him for counsel. Odin had a lot of respect for Mimir, and he valued their friendship and their long intellectual talk in their pursuit of more knowledge.

Odin was hungry for knowledge, especially since he had sought counsel with a Völva who had told him about her foresight of Ragnarök, a future that would lead to great pain.

He needed to know more, and fast, so one day he went down to the well Mímisbrunnr, to ask if he would be allowed to drink from it. This well was special, it contained a vast amount of knowledge, and by drinking the water, he would instantly gain an enormous amount of knowledge.

Even though Odin was Mimir’s uncle, he would not let him drink without getting something in exchange. For the privilege of being allowed to drink, Odin sacrificed his right eye, which then was thrown to the bottom of the well.