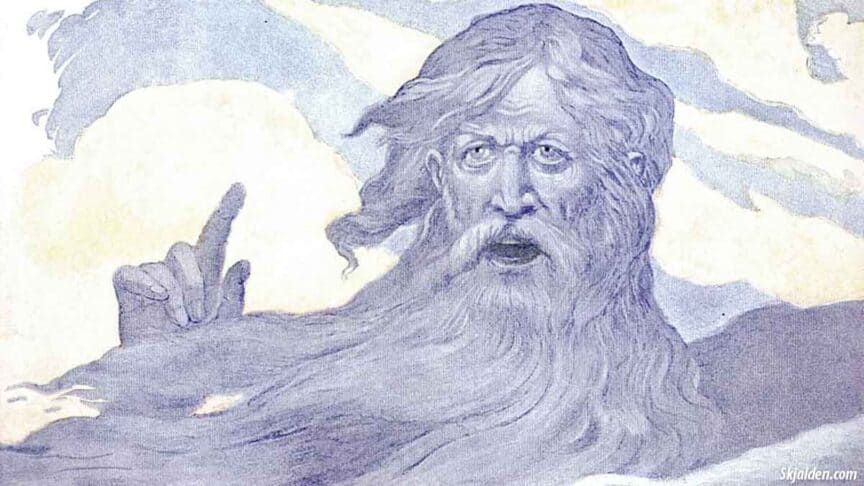 Norse mythology is incredibly rich and deep lore, full of many great stories and poems from Scandinavia and the Germanic countries. Norse mythology which is also known as Germanic mythology is not just a myth, it is a religion and it was practiced by the people who lived in the Germanic countries in the Iron Age until the Viking age. What the Vikings called their religion or if it even had a name like other religions has, no one knows.

In the last few decades, the sagas from Norse mythology and the culture of the Vikings have increasingly spread across the world. Many people have even been inspired in the late 20th century, and references to Norse mythology became more common in literature and in movies such as lord of the rings, The 13th warrior, and in series such as The Vikings.

The Nordic culture has even spread into the gaming industry where there have been made many great games, one of them which is among my personal favorites is a role-playing game called Skyrim, which clearly has a Nordic touch. One of my favorite cartoons from 1986 called Valhalla, always brings me back to some of my happy memories from when I was a child. This is a cartoon I clearly can recommend and it is fun for both children and adults. I especially like the scenes where the gods are participating in Utgard-Loki’s contests in Jotunheim.

Norse mythology is a polytheistic religion that means worshiping multiple Gods and Goddesses. The Vikings believed that there are two branches of Gods the Aesir and the Vanir but they also believed in other mythical beings such as giants, dwarfs, and other creatures. You may have heard some of the Gods or Goddesses before…

Odin who is the chief of the Aesir married Frigg who is the Queen of Asgard. Or what about Thor the God of thunder and the protector of Midgard the world of man! And who can forget about Loki… ahhh Loki so many great stories about him, always up to some new tricks to annoy the Aesir, but there are many many more in the Norse sagas.

The rebirth of a religion?

In Iceland they tend to call it Ásatrú, in Denmark, they also call it Ásatrú or Ásatrú and Vanatrú, I’ve even heard it being called Odinism in the United States, which I personally do not like. To me Odinism sounds like, you are believing or praying to one God but Ásatrú is not just about one God. It should also be said that even to the Vikings, there were variations in the faith depending on where you lived. Some of the Vikings began converting to Christianity after exploring and raiding the coast of England and France, and towards the end of the Viking age, a big part of the population in Scandinavia was a Christian.

Where did the Vikings come from?

The Vikings came from Denmark, Norway, and Sweden in Scandinavia, and since some of these Vikings loved to explore, and since they had the most advanced technology in shipbuilding at their time, they could travel faster and further than anyone else before them.

The Vikings made settlements all over Europe, in countries such as England, France, Germany, and Ukraine, but also further away like in Iceland, Faroe Island, and Greenland. The Vikings did even sail to what today is Newfoundland in Canada to make a settlement which they called Vinland.

Vikings were not barbarians

The Vikings didn’t have any paper and most of their writing has been found on runestones, leather, jewelry, and weapons. Their history and culture have only been passed down orally through stories (also called sagas) and poems. This means a lot of the lore from the Vikings has been lost in time since the Viking age… But then an Icelandic historian, poet, and politician Snorri Sturluson decided to gather as much as he could and write it all down into a book he called The Prose Edda (1220-1230).

Just as the Christians demonized the Vikings, the media today is not that much better. The Vikings were far more than just some bloodthirsty warmongering warriors from the north. They were not just explorers and warriors, but also farmers, traders, poets, and musicians. They were very creative, and made beautiful art, and had superior shipbuilding skills compared to the rest of the world.