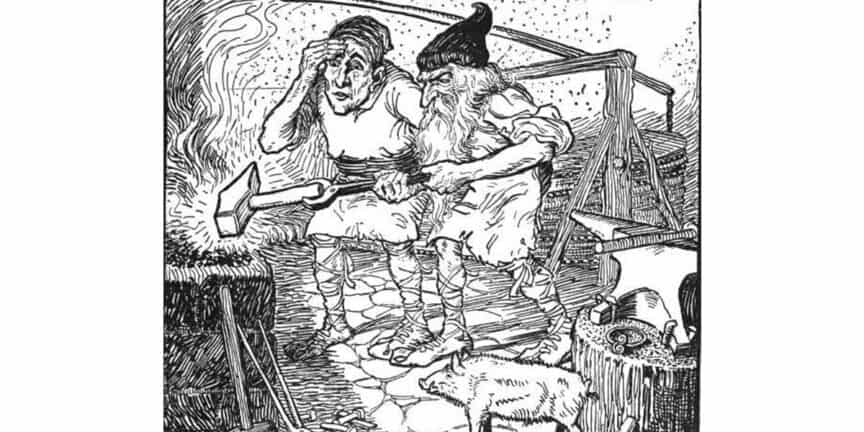 That is because of Loki, one day he sneaked into Thor’s home in Asgard and cut off all Sif’s hair. When Thor saw what had happened he grabbed Loki and was just about to break every bone in his body. But Loki swore an oath to find a way to get the dark elves (which is another word for dwarves) to make new hair for Sif which would be made from gold, that would grow just like normal hair.

Loki then traveled to the dwarf brothers Ivaldi in Svartalfheim, and they made the golden hair for Sif. They also crafted a beautiful ship called Skidbladnir, which can be folded so small, that it can fit inside your pocket. The brothers also made a spear called Gungnir, which became Odin’s spear.

While Loki was in Svartalfheim and probably influence by mead he started to tease the dwarf brothers Brokk and Eitri, that they could not make three treasures equally as good as those that the Ivaldi brothers had crafted.

Loki said I will bet my head that I am right about this. Brokk and Eitri accepted this bet and went to their work area. Eitri placed a pigskin in the forge and told his brother Brokk to work the bellows and not stop until he was finished.

As soon Eitri left the room to find some materials, a fly landed on Brokkr’s hand and bite him. But Brokkr continued to work on the bellows. When Eitri was done he pulled the work from the forge. It was a boar with bristles of gold.

Eitri started to work on the second item, he put gold in the forge and asked Brokkr to work the bellows again and not stop before he returned. As soon as Eitri left the room, the fly returned and landed on Brokkr’s neck and bit twice as hard. But Brokkr continued to pump the air until Eitri finished, this time he had crafted a golden ring, which would be called Draupnir.

Eitri started on the last item, and placed some iron in the forge, and said to Brokkr that it was very important to keep pumping the air this time, or it would be ruined.

Eitri left the room, and this time the fly landed between Brokkr’s eyes biting his eyelids. With blood flowing into his eyes, he was unable to see, so he quickly wiped the blood from his eyes with his hand and hit the fly away. Just at that moment Eitri returned and said that everything in the forge had almost been ruined. Eitri took a hammer from the forge and had now crafted their three treasures for the Gods.

The two brothers and Loki now traveled to Asgard to show the treasures to the Aesir. They gathered in their great hall, and the Gods took their seat in their thrones of fate. Odin, Thor, and Freyr would be the judges and settle the bet for Loki’s head.

Loki gave the spear Gungnir to Odin, to Thor he gave the golden hair for Sif, and to Freyr, the ship Skidbladnir. Loki then started to describe the abilities and the uniqueness of the items. The spear will always hit its mark, the hair will grow fast to the skin and continue to grow and Skinbladnir will always receive a fair wind whenever its sail is raised, no matter where it is going. And it can also be folded up like a piece of cloth so it fits inside the pocket.

Now dwarf brothers took out their treasures, brokkr gave the ring Draupnir to Odin and said that every ninth night eight rings of equal weight would drip from it.

To Freyr, he gave the boar and said that no matter if it is day or night, this boar will race better across the sky and over the sea better than any mount. Furthermore, the shining golden bristles will turn night into day and be a beacon of light when traveling in the lands of darkness.

Brokkr gave the hammer to Thor and said with this hammer you can strike any foe that comes before you and it will never miss its mark. It will always return to your hand no matter how far you throw it. The hammer can’t be destroyed, and you can shrink it, so it will become so small it will fit inside your shirt. But there was, however, one defect, the handle had become too short, because of a fly.

After the Gods had seen all the items they decided that the hammer Mjölnir was the best of all the treasures and that this hammer would provide the best protection against the giants. Therefore it was the two dwarf brothers that had won the bet.

Loki said that he would pay them gold to spare his head, but the brothers replied; we want your head and not your gold. Loki then yelled out, if you want my head you need to catch me. The brothers tried to grab him, but he had already run far away.

Loki can run very fast because he has some magical shoes, that allowed him to race through the air and over the sea. The dwarf brothers asked Thor to catch him, and so he did.

When Loki was caught and sat on his knees in the great hall in Asgard, he said; fine take my head but do not hurt my neck, because my neck was not part of the bet.

Annoyed at this and tired of hearing Loki speak, the brothers took a narrow strip of leather and a knife and wanted to cut holes in his lips and sew his mouth shut, but the knife would not cut.

The dwarves said it would be better if our brother Awl was here, and a few moments later after mentioning his name, he was there. He then stitched Lokis lips together with the needle called Vartari, and finally, Lokis mouth was shut.