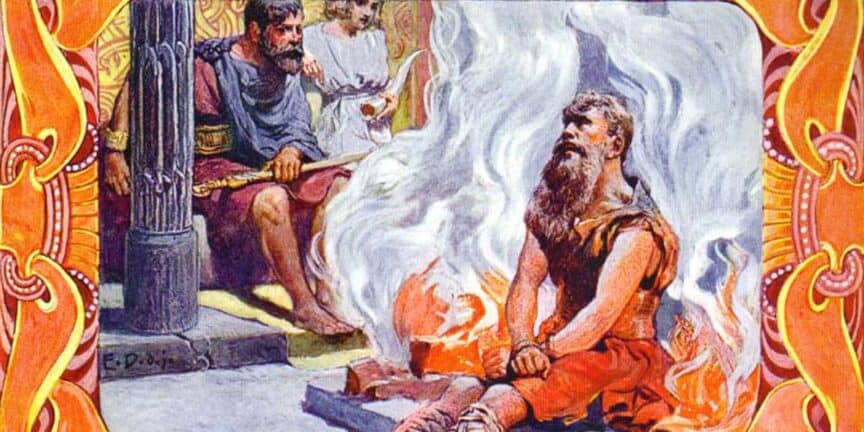 Then Aegir said, It seems to me that Hrungnir was very powerful. Did Thor have any other dealings with the trolls?

Bragi replied; the story of Thor’s journey to Geirrod’s courts is a story worth telling. Many seasons ago Loki was very bored and wanted to have a bit of fun, so he sneaked into Frigg’s house in Asgard and put on her falcon shape.

Because Loki was curious he used it to fly into Geirrod’s courts, there Loki saw a great hall so he landed there and looked in through a window. Geirrod who was inside saw the falcon and commanded his guards to seize the bird.

One of the guards tried to capture him, but he had trouble climbing up the wall to where Loki was sitting because it was so high up.

Loki loved to see all the effort trying to catch him and he was laughing more and more looking down at the guard struggling while he was climbing higher and higher up on the wall.

Loki sat there and waited until the very last moment before he decided to fly away. When the guard finally was at the same level he rushed at Loki, but Loki was waiting for this, so he just spread his wings and began to fly away. But to Lokis terror, his feet were stuck.

The guard grabbed Loki with one hand and brought him down to the giant Geirrod. Geirrod looked into the eyes of the falcon, and he suspected it was a person, so he demanded that he revealed who he was. But Loki remained silent.

Annoyed at the falcon, Geirrod opened up a chest and threw Loki into it, and locked it. After having been locked up in the chest for three long months, Geirrod finally opened it again. He lifted the falcon out again and asked again, who are you? Loki who was now starving told him who he was.

The giant released Loki, but only if he swore that he would find a way to bring Thor to his home without any of his weapons, Loki promised that he would.

Loki went back to Asgard, and he managed to convince Thor to travel with him to Geirrod’s courts without any weapons. Because it was such a long way, Thor and Loki stayed for the night at the giantess named Grid, she is the mother of Vidar the silent.

When Loki fell asleep, Grid told Thor about Geirrod and how cunning and dangerous he was. Grid lent Thor a belt of strength, a par of iron gloves and her staff called Gridarvol (which means Grid’s staff)

Thor and Loki continued their journey at the break of light, they came to the river called Vimur (which means a great waterway). Here Thor buckled on the belt of strength and supported himself against the current by placing Grid’s staff on the downstream side.

Loki held on to Thor’s belt while he was walking across the river when they came to the middle of the river the water had risen so high that it reached to his shoulders. Then Thor spoke this verse:

as I want to wade you,

crossing to the giant’s courts.

Beware. If you grow,

As high as heaven!”

Thor looked up and saw the giantess Gjalp with one leg at each side of the river, she was the daughter of Geirrod, it was her that was causing the river to rise. Thor picked up a large rock from the river and threw it at her, and hit her in the head.

Thor then stepped towards the shore, where he was able to grab hold of some rowan branches and was able to climb up from the river. (This event is the origin of the expression that rowan trees are Thor’s salvation)

Thor and Loki continued their journey towards Geirrod’s courts and arrived later that evening. The guards directed them to a goat shed where they could stay for the night. But there was nothing inside, just one chair that stood in the middle of the room, Thor sat down in it.

Thor and Loki continued their journey towards Geirrod’s courts and arrived later that evening. The guards directed them to a goat shed where they could stay for the night. But there was nothing inside, just one chair that stood in the middle of the room, Thor sat down in it.

A few moments went by, and he started to notice that the chair started to rise toward the ceiling. He held up Grid’s staff and pushed the chair down as hard as he could. The chair slammed down onto the floor followed by two loud horrible screams.

The guards came into the room and told Thor to come with them into Geirrod’s hall for a contest. Thor entered the hall and saw two large fires were burning down the length of the hall. Thor walked down the hall until he stood opposite to Geirrod.