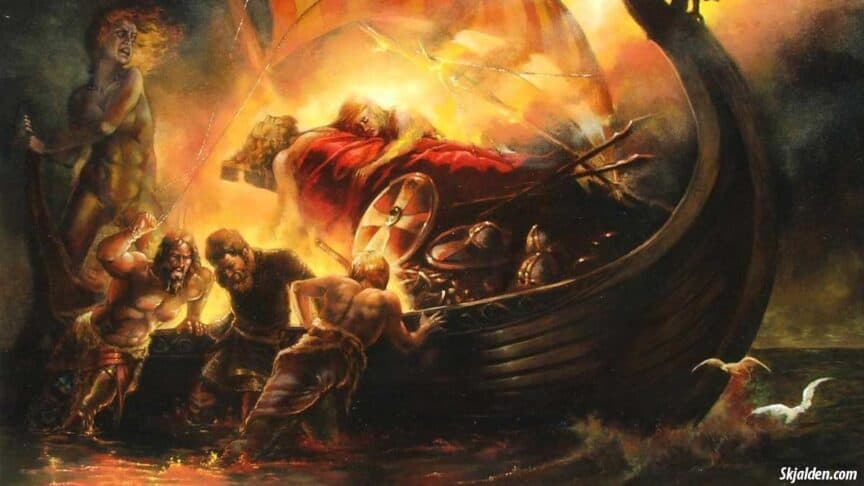 After many weeks of having dreams about his life being in danger, Baldur, the God of light, finally told it to the Aesir at a council meeting. Because Baldur is the most loved by all the Gods, they all agreed that something must be done to protect Baldur from all dangers.

The Goddess Frigg the wife of Odin was chosen by the council to make sure that Baldur would not be harmed. So she set out on a journey throughout all the nine realms to ask everyone not to harm their beloved Baldur.

The Gods were curious and wanted to see if Baldur really was safe from all dangers so they decided to have a bit of fun. Some of the Gods started to shoot arrows at Baldur and others threw stones at him, but nothing seemed to cause any injury to him, and all the Gods thought it was remarkable.

But when Loki, son of Laufey saw this, he got furious. Loki shapeshifted himself into a woman and went to talk with Frigg at her house Fensalir. When he arrived at her house, Frigg asked him what all the noise from the assembly was all about. The woman replied, everyone is shooting arrows at Baldur, yet he suffers no injury.

The woman asked; Really? Are you sure that everything has given their oaths not to harm him?

Frigg replied; Almost everything, there was one thing that I thought was too young to ask for an oath, and that was the mistletoe that grows west of Valhalla.

After hearing this the woman disappeared, Loki shapeshifted back into himself and went to get the mistletoe and brought it back to the assembly.

When Loki arrived at the assembly he noticed Hod, standing at the edge of the circle of people. Loki went over to talk to him.

Loki asked; Why aren’t you shooting at Baldur?

Hod replied; You know very well Loki that I am blind, so I can’t see where he is, and even if I did, I have nothing to shoot at him.

Loki replied; You should be behaving like the other Gods and honoring Baldur as they do. I will help you Hod and direct you to where he is standing, I have this twig you can shoot at him.

Hod took the mistletoe and followed Loki’s directions and shot it at Baldur. The shot went right through Baldur, and he fell to the ground dead. The atmosphere with music, laughter, and joy quickly turned into grief.

Weeks went by, and the Gods had started to accept their loss of the beloved Baldur. Frigg then asked the Aesir who among them that wanted to gain all her love and favor by agreeing to ride the road to Hel, to see if he could find Baldur and get him back from the dead.

Frigg said; Tell Hel the queen of the underworld that she can have anything she wants if she let Baldur return to Asgard.

Hermod the brave, Odin’s son stood up and said; I will do it, I will undertake this journey.

Hermod was given the horse Sleipnir for the journey, Sleipnir is Odin’s horse and it is the fastest of all horses.

The Aesir took Baldur’s body and placed it on his ship called Ringhorn, which was the greatest of all ships. It was so big that it could be folded out so everyone from Asgard, Valhalla, and Folkvangr could be on it. But it could also be folded so small that it would fit inside your pocket.

The Gods wanted to use this ship as Baldur’s funeral pyre, but they could simply not drag the ship out to sea, not even the God Thor was strong enough. The Aesir sent word to the giantess called Hyrrokkin, she is a hideous beast, she came riding on her wolf, using poisonous snakes as reins.

She jumped off her wolf and walked over to the ship, Odin called to four of his berserkers from Valhalla to come and watch her wolf. But the wolf was too strong for them, so they knocked it out.

On Hyrrokkin’s first try she pushed the ship so hard that the log rollers underneath the ship caught fire, and the ground started to shake. This made Thor furious, and gripped his hammer Mjolnir, and was just about to crush her skull, but the Aesir begged Thor not to harm her.

When the ship had been dragged out to sea, and Nanna the wife of Baldur saw this, her heart burst from sorrow and she died. She was put next to her husband on the funeral pyre, which was then set on fire.

Thor went over the pyre and blessed it with his hammer Mjolnir, and just at that moment a dwarf named lit, ran in front of his feet, and Thor kicked the dwarf with his foot, so it landed in the fire and burned to death.

Everyone from near and far even the giants had turned up to Baldur’s funeral because he was loved by everyone. Odin took off his golden ring Draupnir, which means the dripper, and placed it on the pyre.

Meanwhile very far away was Hermod the brave. He had been riding for nine days and nights in the deepest and dark valleys. They were so dark that he did not see any light before he reached the river Gjoll, and rode on to the Gjoll bridge. The bridge was shining so bright that it could be seen from far, this is because the bridge was roofed with gold.

But Hermod was not alone anymore, the bridge was guarded by Modgud. And she asked Hermod; Who are you, what is your name and what is your family name? Yesterday I had five troops of dead men riding across this bridge, and yet the bridge echoed more under you alone, and you also lack the color of the dead. Why do you ride here on the road to Hel?

Hermod answered; I ride to Hel in search of Baldur, have you seen Baldur here on the road to Hel?

Modgud replied; I have seen Baldur, he rode across this bridge and down to the north were Hel lies.

Hermod quickly mounted his horse and rode on until he came to the gates of Hel. The gates were closed so he tightened the saddle on the horse and jumped over the gate. Hermod rode up to the hall and dismounted and went inside.

Here he saw his brother Baldur sitting in the seat of honor next to Hel. Hermod stayed here until dawn and then asked Hel the queen of the underworld to let Baldur return with him.

Hermod said; Everyone of the Aesir is weeping in deep sorrow, I beg you to let him return with me to Asgard.

Hel answered; If Baldur really is loved so much by everyone as you say, I will let him go, but only if all things around the world, alive or dead, weep for him. If anyone dislikes Baldur or refuses to cry for him, then he will remain with me here in Helheim.

Baldur led him out of the hall and gave him the ring Draupnir, Nanna gave Hermod a fine linen robe that he had to give to Frigg and a golden ring to Fulla. Hermod mounted his horse and rode back to Asgard.

When the Aesir heard what Hel had said, they were filled with the hope of seeing their beloved Baldur again. The Aesir sent messengers throughout all the nine worlds to ask everyone and everything to cry for Baldur. Humans, giants, animals, trees, flowers, stones, and even the earth web for Baldur.

When the messengers had accomplished their task and were on their way home, they came across a cave with a giantess inside. She said her name was Thokk, which means gratitude. When they asked her to weep for Baldur,

Alive or dead, the old man Odin’s son gave me no joy.

Let Hel hold what she has.

Rumors have it that it was Loki, that had shapeshifted into the giantess.