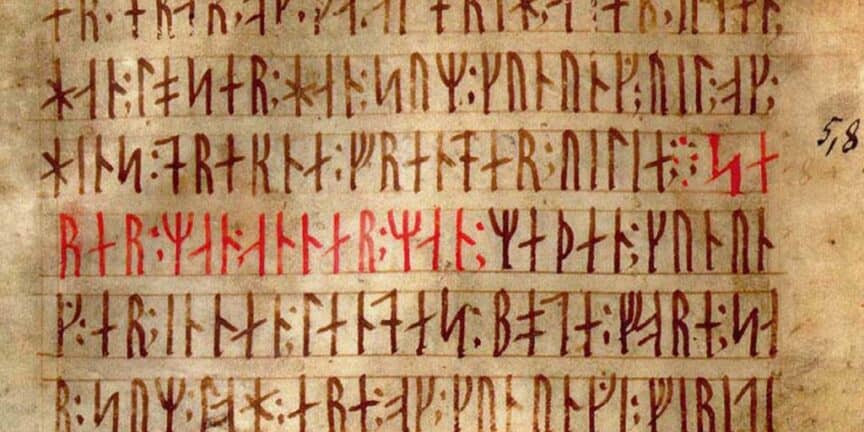 Many cultures have assigned meanings to their numbers, and this was of course also the case for the Nordic cultures. The numbers and their meanings are reflected in books such as the Poetic Edda, but also in many of the Old Norse Icelandic sagas from the Viking age.

These ancient stories have many hidden messages and meanings in them, and today we will take a look at the numbers in these books and try to decode the symbolic meaning of these numbers in Norse mythology as best as we can.

There are many examples that the number three is an important number in Norse mythology, and that is something that we can read about in the Eddas written by Snorri Sturluson. Three is a number that can be seen as a number that is sacred and a number that often was used by the royals and the people of high status in the Viking age.

For instance, it was the three Gods, Odin, Vili, and Ve, that created the first two humans from two tree logs. Odin gave the logs life and a spirit, Vili gave them movement, mind, and intelligence and Vili gave them shape, speech, feelings, and the five senses.

There are also the three Norns (Old Norse: Nornir) who sit at the tree Yggdrasil in Asgard and spins the fate of every living being into a long thread of life. These three Norns are named Urd (Old Norse “Urðr”), Verdandi (Old Norse “Verðandi”), and Skuld (Old Norse ”Skulð”).

But there are many other occurrences of the number three, the world tree Yggdrasil has three roots, the first root is in Asgard, which the Norns pour water on every day from the well Urd, to keep the tree green and healthy.

The third root is in Niflheim and goes far into the ground where Helheim lies, and here the dragon Nidhug (Old Norse: Níðhöggr) chews on the root, while it waits for more people to arrive at the entrance to Hel.

In the saga of Thor’s journey to Utgard in Jotunheim, he is part of a competition where Utgard-Loki challenges him to drink from a large drinking horn. Here the number three is also represented because Thor is only able to take three draughts from the magical drinking horn. For those of you who don’t know who Utgard-Loki is, he is not Loki the trickster, but Utgard-Loki is a Jotnar (Giant) that lives in Jotunheim (Land of the Giants). Utgard-Loki is also known as Skrymir, and he is a well-known illusionist by the Aesir (Æsir).

Loki is also part of the number three, Loki has three children with Angrboda, Hel who is the ruler of the underworld Hel. The Midgard serpent which is the serpent that lives in the ocean, and the Fenris (Old Norse: Fenrir) wolf that was bound to a rock on an island in Kattegat.

The dwarves that made the robe to bind the Fenris Wolf to the rock, also needed three tries to make a robe that was strong enough to keep the wolf bound to the rock.

The signs of Ragnarok (Ragnarök) is also in three’s, there will be three cold winters (called Fimbulwinters).

Okay, enough examples of the number three in Norse mythology, but there are plenty more examples that you can find yourselves by either reading the Old Norse texts, but you can also find it on this website.

The number seven is another important number, however, it is mainly in the Icelandic sagas that this number can be found, and it is often used in the sagas to indicate something that has taken place over a long period of time or completeness. An example of this can be found in Egil’s saga.

In English: ”Þorgeirr(Thorgeirr), the son of Þorsteinn(Thorsteinn), was the strongest of the brothers, but Skúli was the biggest; he lived at Borg after that Þorsteinn, his father died. Skúli went on raids for a long time; he was a forecastle-man for earl Eiríkr in Járnbarðinn, when the king Ólafr Tryggvason died; Skúli took part in seven wars as a Viking. And he was believed to be the best and sturdiest of warriors; after that, he went to Iceland and settled down at the farm of Borg and lived there until his old age, and there came many men from his lineage”.

While some of you will immediately think of Odin’s steed, Sleipnir, when you hear the number eight, because his horse has eight legs, it is important to remember where Sleipnir is from. Sleipnir was born by the Jotnar and trickster Loki, yes, born by Loki, Loki is Sleipnir’s mother. Once, Loki shapeshifted into a mare and had intercourse with the horse called Svadilfari (Old Norse: Svaðilfari). Which can be read in the saga of how the walls around Asgard was built.

Loki has indeed always been a naughty troublemaker for the Gods and Goddesses, and why they tolerated him in their midst, can really make you wonder what his role was among the Aesir. However, the trust that the Aesir had in Loki, vanished with time and he was punished by the Aesir.

Some sagas turn the number eight into a nine, and something like this could have been done to avoid the symbolism of the number eight. For example, Odin’s magical golden ring Draupnir, that was made by the two dwarves Brokkr and Eitri. Drips every ninth day, eight new rings of equal quality as Draupnir. Here eight is turned into a nine, eight new rings plus Draupnir is nine.

In the Old Norse sagas, the side which has eight warriors is often defeated, for instance, in the Grettis saga, Torbjørn (Old Norse: Þorbjǫrn) Ox urges the brothers Gunnarr and Torgeirr to ambush Atli, Grimr, and their companions. They are eight and from their ambush, they attack Atli and his five men. Even though they are eight Vs six they lose the fight.

In the Grettis saga, Vibjodr (Old Norse: Vígbjóðr) and Vestmarr raid the Hebrides islands with eight ships, here they met Trandr (Old Norse: Þrándr) who had five ships. Even though they were eight ships Vs five, and should have won they lost the battle and had to flee back to where they came from.

Number eight really does seem to be an unlucky number and unstable, at least according to the sagas, so if you can, and want to avoid this number, turn eight into a nine.

The number nine is another important number in the Old Norse myths, and as I said before it’s meaning could be considered something that is a turning point, and possibly also linked to magic and paganism. Number three and nine are in general the most important numbers in Norse mythology, and they can be found in numerous places, for example.

Odin hung himself on the tree of life Yggdrasil for nine days and nights, until the secret of the runes was revealed to him, but just for a split second, before he fell to the ground.

There are nine worlds in Norse mythology, that all hangs Yggdrasil. These worlds are, Niflheim, Muspelheim, Asgard, Midgard, Jotunheim, Vanaheim, Alfheim, Svartalfheim, and Helheim.

Heimdall the guardian of the rainbow bridge Bifröst was born by nine sisters.

Thor takes nine steps and falls to the ground dead after he fought his last fight with the Midgard Serpent at Ragnarok (Ragnarök). There are more examples in the sagas of the number nine, more than I will mention here.

Numbers in Lord of the Rings

JRR Tolkien loved Norse mythology and according to himself, he took a lot of inspiration from these books, which means he might also have used the numbers and their meaning according to how they were seen by the heathens in Northern Europe. An example of this can be found in the book lord of the rings.

As you can see, the numbers three, seven, and nine are mentioned in the Lord of the Rings and may have been an inspiration from Norse mythology and the Icelandic sagas. Tolkien was also influenced by other traditions and religions, for instance, the number thirteen, which has its meaning of being unlucky in Christianity.

“Of course there is a mark,” said Gandalf. “
I put it there myself. For very good reasons.
You asked me to find the fourteenth man for your expedition,
and I chose Mr.Baggins. Just let any one say I chose the wrong
man or the wrong house, and you can stop at thirteen and have
all the bad luck you like, or go back to digging coal.”
– The Hobbit by J. R. R. Tolkien

I know there are probably some hardcore Old Norse literature fans out there, that would say, well what about the thirteen Yule Lads? (Icelandic: Jólasveinarnir). I personally believe that this Icelandic tradition came after the Viking age, or maybe there was added a thirteen Yule Lad, to annoy the Christians on Iceland.

Regardless of the answer, the number thirteen does not seem to be connected with something that is unlucky in Northern Europe, and there is no mention of this number in the Eddas, the only occurrence of it is in the Icelandic sagas, which probably were influenced by Christianity at the time when they were written down.

The symbolic meaning of numbers in historical context

It could be possible that you are able to add one or more zeros to one of the numbers, and still keep the original symbolic meaning of the numbers. For instance, the doors in Valhalla are so wide that 800 warriors can walk side by side into the great halls. It is, however, not for certain that this is the case, but it does seem there is something about it in the sagas.

The battle of Stamford Bridge took place on 25th September, 2 + 5 is 7, could this also be part of the symbolic meaning and therefore making it part of the whole?

Are these numbers a coincidence? Or did Harald Hardrada on purpose pick this date and assemble his army because of these numbers and their symbolic meaning?

Three days later after Harald Hardrada’s defeat at Stamford Bridge in Yorkshire, William of Normandy landed at Pevensey on the south coast of England.

Regardless of these historical events were based on numbers and their symbolic meaning, I still think it is still an interesting thought. Maybe next time you open a book and read the Old Norse sagas, you might pay more attention to the numbers and if they could have a deeper meaning in the saga.