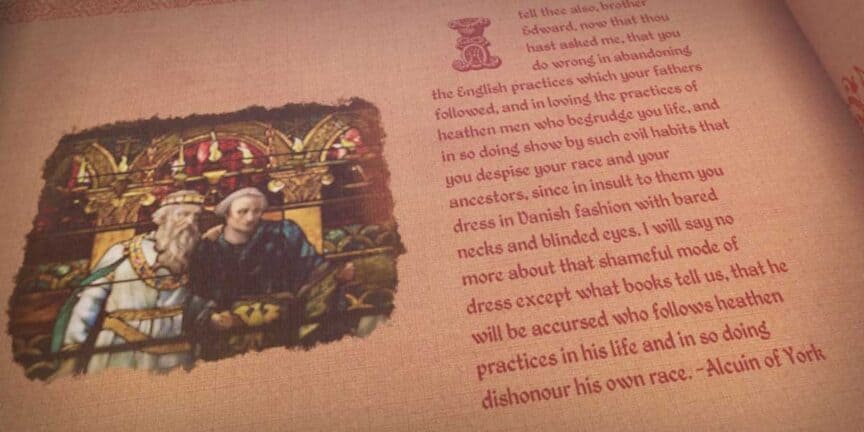 The stories told about the beginning of the Viking age have become one-sided. I will take it in a different direction in this article, and you will see a different angle on what could have caused the beginning of the Viking Age. Hollywood series and movies about Vikings have for a long time painted them as being barbarians from the north. Even the popular series Vikings on the history channel are no different on this matter.

The Danes and the Norwegians knew about the British Isles long before Ragnar Lothbrok heard a rumor about the riches in the west and held up his sunstone to the sky. The attack on the monastery at Lindisfarne was also not the first contact between the two civilizations, nor would it be the last. So let’s take a look at the events that lead up to the beginning of the Viking Age.

The cause of the Viking age

At the beginning of the 8th century, there were three major political powers in Europe, the Franks who had taken over large parts of Europe after the fall of the Roman Empire in the west. The Byzantine Empire also was known as the Eastern Empire of Rome and the Umayyad Caliphate. As a consequence of the Islamic expansion into Europe via the Iberian peninsula in the first half of the 8th century, the trade routes in Europe were slowly pushed north. This led to more trading opportunities for the Scandinavians, but it also leads to more piracy in the north sea. This might be one of the reasons why commerce cities like Ribe, Birka, and Kaupang slowly became trade hubs in the north.

The two other empires were too far away from Scandinavia to have any influence on what soon would be known as the Viking phenomenon, but the Franks were literally on their doorsteps. When Charles or as he later would be called Charlemagne, became the sole ruler of the Franks, he started to expand the Frankish territories with religious warfare. Charlemagne was successful in pushing back the Islamic invasion across the mountains and conquered huge areas in central and in southern Europe, but he was stopped at the Saxon marches in the north.

In the year 772, Charlemagne’s forces crossed the borders into Saxony and attacked and destroyed the most sacred place for the Heathens in Saxony, the shrine where the wooden pillar known as Irminsul stood, it was as sacred to the Saxons as Yggdrasil were to the Scandinavians.

In the following years, Charlemagne’s forces would invade the territories of Saxony, until the leader of Saxony was defeated in the battle at Bocholt. Saxony was split into missionary districts, followed by mass baptisms of the heathens. In 782 the Saxons rebelled against the Franks and defeated them at the Süntel hills, but Charlemagne’s forces responded quickly and without mercy. Charlemagne’s army captured 4.500 Saxons and brought them down to the banks of the river Aller and baptized them all into Christendom, and then executed them one by one.

A mass slaughter like this would not have gone unnoticed, it would have spread like a wildfire across Europe and echoed throughout the deepest valleys of Scandinavia. This would not only have been seen as an act of war on all the heathens but as a direct threat to all the heathens and their way of life in northern Europe.

With the enemy at the borders of Scandinavia, and Saxon’s fleeing into the arms of the Danes, the heathens now had their back against the wall, and as some people like to say, an attack is the best form of defense.

The attack on the monastery Lindisfarne

On June 8, 793 Norse longships suddenly appeared on the shores of a tiny island in Northumbria. This place was one of the most sacred places of Christendom in the northern hemisphere, and a place that would be unchallenged and easy to reach by sea. The island is called the Holy Island of Lindisfarne or simply the Holy island and it was the host of one of the greatest treasures in Christendom in the 8 century, the monastery of Lindisfarne.

Letter to King Ethelred of Northumbria by Alcuin

”Lo, it is nearly 350 years that we and our fathers have inhabited this most lovely land, and never before has such terror appeared in Britain as we have now suffered from a pagan race, nor was it thought that such an inroad from the sea could be made. Behold, the church of St. Cuthbert spattered with the blood of the priests of God, despoiled of all its ornaments; a place more venerable than all in Britain is given as a prey to pagan peoples.” -Alcuin

Details added The attack on the monastery Lindisfarne

In the 12th century, Simeon of Durham adds details to this encounter that may have been from a lost record.

“In the same year, the pagans from the northern regions came with a naval force to Britain like stinging hornets and spread on all sides like fearful wolves, robbed, tore and slaughtered not only beasts of burden, sheep, and oxen, but even priests and deacons, and companies of monks and nuns. And they came to the church of Lindisfarne, laid everything waste with grievous plundering, trampled the holy places with polluted steps, dug up the altars, and seized all the treasures of the holy church. They killed some of the brothers, took some away with them in fetters, many they drove out, naked and loaded with insults, some they drowned in the sea.” – Simeon of Durham

The English copied the heathens both in practices and fashion

Despite what you might think the people in Britain already knew about the so-called heathens from Scandinavia, they had been trading with them for centuries. Some of them including important figures in their society even copied the heathens both in practices and fashion.

“I tell thee also, brother Edward, now that thou hast asked me, that you do wrong in abandoning the English practices which your fathers followed, and in loving the practices of heathen men who begrudge you life, and in so doing show by such evil habits that you despise your race and your ancestors since in insult to them you dress in Danish fashion with bared necks and blinded eyes. I will say no more about that shameful mode of dress except what books tell us, that he will be accursed who follows heathen practices in his life and in so doing dishonor his own race.” -Alcuin

The monastery of Lindisfarne was a soft target and the Vikings knew it, it can clearly be seen in the evidence left behind for us to study. Take a look at the Lindisfarne stone, what do we see? Seven people, probably the Viking raiders, five of them have their weapons raised in the air two axes and three swords, but no shields. If this is a depiction of the attackers, it must mean that they were not expecting any resistance.

I wonder if the attack really just was a random attack against a defenseless monastery full of riches. Or was it on purpose and a direct response to the ever-expanding Christendom in Europe and an attempt from the heathens to stab them directly in the heart. The heathens in northern Europe had for a very long time had a target painted on their back by the Church, and the Monk Alcuin had also wondered in a letter he sent to a friend if there were any hope of converting the Danes.

Heathens fought for the survival of their faith and culture

The Viking age could be the result of the heathens fighting for the survival of their faith and culture. And since the heathens mostly consisted of small clans across Scandinavia, with no chance to create a military campaign against the Frankish superpower. They might have searched for more easy targets that could be attacked in small groups, a form of gorilla warfare.

Why would the Vikings destroy religious symbols, kill the monks, and burn down the churches? They had never cared about which faith other people had, nor did they ever force, their own upon others. This hatred must come from somewhere, and news of what had happened to the Saxons could have been the ”spark that lit the fire”, the Vikings were trapped like a wolf in the corner, the corner of Scandinavia. This might not have been a fight for silver and riches but the survival of their own society.