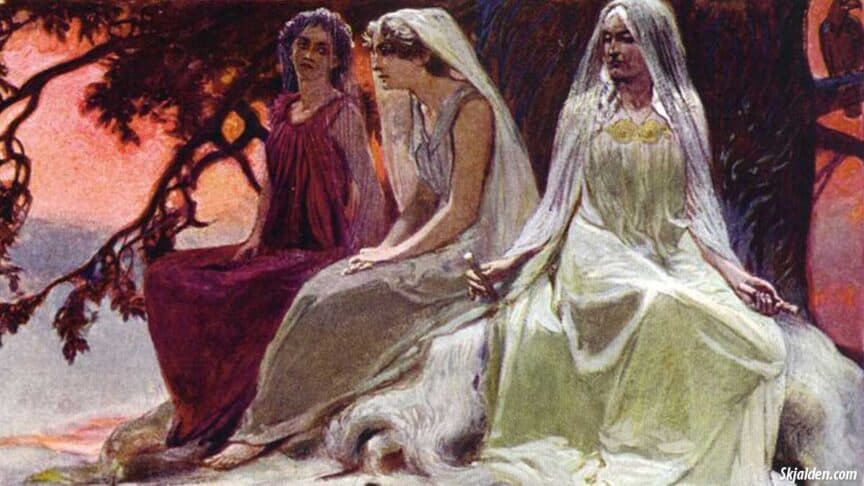 The three Norns (Old Norse: norn, plural “nornir”) in Norse mythology decide the life course and length for every single being. The Norns live in a hall at the well of Udr (Old Norse: Urðarbrunnr) which is located in Asgard (home of the gods and goddesses).

The Norns have a very important task, and that is to help Yggdrasil stay green and healthy, each morning they carry water from the well Urðarbrunnr and collect the moist earth or clay that lies around the well and pour it over the tree of life Yggdrasil. If they should fail to do this daily task, then the ash tree will start to rot.

The Norns are not goddesses, in fact, they are not even Aesir. They can be described as beings of time. They are the personifications of the past, the present, and the future.

According to the Prose Edda by Snorri Sturluson, the names of this trio of Norns are Urðr, which means “what once was”, Verðandi “what is coming into being”, and Skuld “what shall be”.

According to Völsungakviða, when a new child is born, the Norns will appear at its birth to decide how long the newborn should be allowed to live. While observing the child, the Norns will measure the child’s lifespan, its fate, both good and bad, and weave it into a thread of life.

English: Night fell in town, the nornir came, they who shaped the age of life, they bade him most famed of fighters all and best of princess ever be.

English: Mightily they wove the web of fate, While Bralund’s towns were trembling all; And there the golden thread they wove, And in the moon’s hall fast they made them.

Influence of the Norns

The Norns were very respected by the people, and it was quite common to serve a special kind of a porridge called norn porridge to a woman who had just given birth.

This ritual was a kind of offering to the Norns, and the Norse way of showing them the respect that they deserved. This ritual was probably done with the intention of bribing or being on the good side of the Norns, who in return would bless the mother and the child with good health.

There are some indications that there might be more than three Norns, according to the Gylfaginning in the Prose Edda by the Icelandic author Snorri Sturluson.

“A beautiful hall stands under the ash tree beside the well of Udr (also referred to as the well of fate). Out of this hall come three maidens, who are called Urd, Verdandi, and Skuld.”

“These maidens shape men’s lives. We call them Norns. There are yet more Norns, those who come to each person at birth to decide the length of one’s life, and these are related to the gods. Others are descended from the elves, and a third group comes from the dwarves, as is said here:”

This could mean that there are more than three Norns and not just three for each race. It is possible that the three main ones are Urd, Verdandi, and Skuld, and then there are multiple tiers of Norns, based on race and perhaps luck. Each being could also have their own norn, just like a fylgja.

“If the Norns decide the fates of men, then they do so in a terribly uneven manner. Some people enjoy a good and prosperous life, whereas others have little wealth or renown. Some have a long life, but others, a short one.”

“High said: The good Norns, the ones who are well born, shape a good life. When people experience misfortune, it is the bad Norns who are responsible”

We know from an inscription carved into a piece of wood by a man named Þórir (Thórir) in the Borgund stave church in Norway, that the people were influenced by the good and bad Norns, long after Christianity had placed its mark on Scandinavia.

The inscription reads: Þórir carved these runes on the eve of Olaus-mass, as he traveled past here. The Norns presented measures of good and evil, great toil … they created before me.

There has not been found any evidence that the Norns were worshipped, but the carving from the church and the old Norse sagas that have been retold around the campfire for centuries seem to indicate that people believed that it was the Norns (Old Norse: nornir) who decided their fate, and how long they would live.

“It is no secret that life isn’t fair, some people are born into a wealthy family, while others live in areas with better opportunities. We can, of course, choose to blame the Norns for our fate, but we can also just accept it, and realize that some of us live our lives like a video game set on hard mode. I don’t know about you, but I rather choose to accept that challenge than to blame the Norns.” -Skjalden

In the popular culture

In the Marvel comics, the Norns have been depicted as the three sisters Skuld, Urd, and Verdandi. According to marvel, they are the overseers of the fates of the people in all the realms.

In the video game God of War from 2018, the Norns have been used in a form of chests called Nornir. These chests contain collectibles that can be used to improve Kratos’ health and rage stats.

In 2004, the heavy metal band Amon Amarth released an album with the name Fate of Norns.