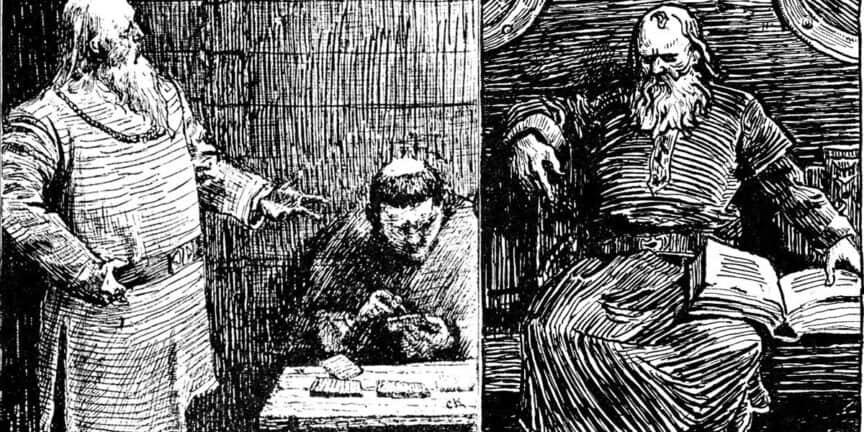 Snorri Sturluson was born into the wealthy and powerful family Surlungar in Hvammur in Iceland in 1179. His parents were Sturla Thordarson and Guðný Böðvarsdóttir. Snorri had two brothers and two sisters and also nine half-siblings.

Snorri was raised from the age of 3 or 4 by Jón Loftsson, who was a relative of the Norwegian royal family in Oddi, Iceland. The reason why he was not raised by his own parents was because of a settlement in a court called Althing.

His father Sturla had settled a lawsuit with the priest and chieftain Páll Sölvason, Páll’s wife Þorbjörg Bjarnardóttir had attacked him with a knife and said she wanted to take his right eye, so he could look like his one-eyed hero Odin. Sturla had been lucky, the bystanders had deflected the blow so he was only cut on his cheek.

The settlement in Althinget would have bankrupted Páll but Jón Loftsson intervened in the Althing to mitigate the judgment to compensate Sturla, he offered to raise and educate his son Snorri. Because of this Snorri received an excellent education and made connections that he might now otherwise have made.

Snorri Sturluson got married in 1199 at the age of 21 with Herdís the daughter of Bersi Vermunddarson a very wealthy family. From her father, Snorri inherited an estate at Borg and a chieftainship. Snorri would soon after acquire more property and chieftainships.

Snorri and his wife had two children together, Hallbera and Jón. But the marriage would not last very long, and they got divorced in 1206. Snorri settled in Reykholt in an estate where he made significant improvements, including an outdoor hot tub called Snorralaug. During his time at Reykholt, he fathered five more children with three different women. Snorri would marry his children off into unhappy marriages which would further enhance his political goals and make him more powerful.

Snorri was fat and loved to sit and soak for hours in his hot tub with a cup of ale in his hand, he was, in fact, a heavy drinker. Snorri was the richest man in Iceland and knew the laws by heart and he was clever and cunning. Snorri used his political powers to benefit himself and his own family.

Snorri Sturluson was a member of the Althing

In 1215 Snorri became a law speaker of the Althing, the only public office of the Icelandic Commonwealth and a position of high respect. In the summer of 1218, he got a royal invitation so he quit his job as a law speaker and sailed to Norway. Here he met the King of Norway Hákon Hákonarson who only was 14 years old. Two years later Snorri was given the title of Baron in 1220 by the King of Norway and he was showered with gifts and in return, Snorri wrote poetry about them.

In 1220 Snorri Sturluson returned to Iceland and in 1222 he became a law speaker of the Althing again, which he held until 1232. His fame as a poet helped Snorri in being elected to this position. In 1224 Snorri and the widow Hallveig Ormsdottir became a couple, she was a granddaughter of Jón Loftsson. Snorri became the most powerful chieftain in Iceland during the years of 1224-1230.

Shortly after he had written his last book Snorri was killed because he had betrayed the other Icelandic chieftains by selling out the independence of Iceland to the King of Norway, but Snorri had also betrayed the King when Skúli who was a pretender to the Norwegian throne had offered him to make him a Jarl of Iceland.

After Skúli’s death, Gissur had become King Hákon’s new favorite chieftain. Gissur had received a letter from the King that said Snorri was a traitor. The King had ordered Gissur to capture Snorri and send him back to Norway or to kill him, but Gissur decided to wait.

Snorri Sturluson had a depression

In June 1241 when Hallveig died of sickness, Snorri went into a depression and it seems he lost interest in everything. Hallveig’s children asked Snorri for half of his stuff as if the couple had been married. He said that he would only share everything that was in the east, which was what Hallveig had brought into the relationship and half his money and valuables.

But the two children were not happy about this deal and went to Gissur to complain about it. This turned out to be the excuse that Gissur had been waiting for. Gissur gathered support from some of the other chieftains and late at night on September 22nd, Gissur and 70 men rode up to Snorri’s house, Colbain’s army of 400 blocked the road to the north, and another chieftain’s army blocked the road to the west.

Gissur and his men went into Reykholt unopposed and broke into Snorri’s house. The noise from the splintering wood from knocking in the door must have awoken Snorri, and he stumbled out of bed and into a storage room in his house. Here he was trapped, and he hid behind some barrels while he could hear the wind howling outside in the dark and cold night. An old fat man like Snorri would not get far in just his nightshirt.

While Gissur’s men went from room to room searching for Snorri, Gissur asked the priest were Snorri was. If the priest told them were Snorri was or not, doesn’t matter moments later they found Snorri. The captain said to one of his men, strike him down! Don’t strike Snorri replied, Strike! Don’t strike! The man stroke Snorri and so did another, he collapsed on the floor, and Snorri Sturluson was dead.