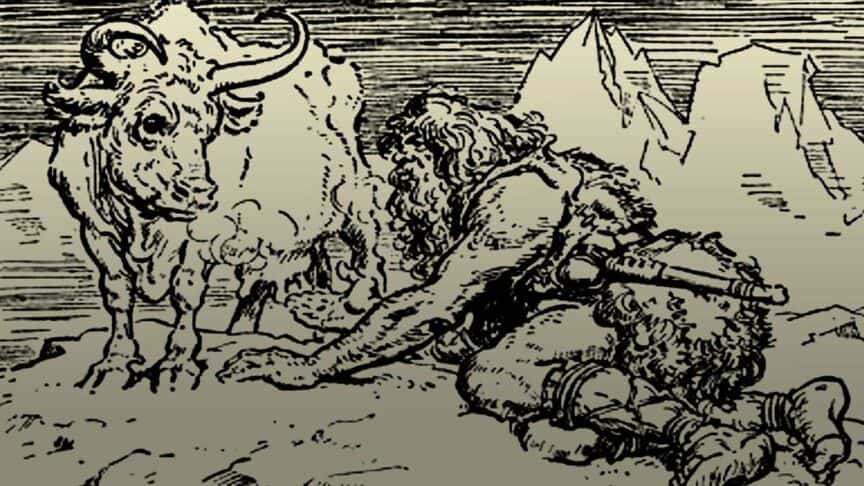 In prehistoric time a giant cow named Audhumbla (Old Norse: Auðumbla) was living in an area that only consisted of snow and ice. This place was called Niflheim, and it was one of the first two realms that were created from Ginnungagap.

It was an extremely cold place, nothing could grow here, no trees, no plants, not even a piece of moss or grass, just snow and ice as far as the eye could see.

Audhumbla was hungry, so she began to lick on the salty rime rocks. The ice melted, and it must have helped with the hunger because she kept during it.

Nearby, another primeval creature came into life, it was Ymir, created from the venom that dripped from the icy rivers Élivágar.

Unlike the surrounding land which was completely barren for food, the giant cow was full of nourishment. Every day, Ymir drank from the rivers of milk that was created from the udders of Audhumbla. The warm and delicious milk warmed his body, and he slowly began to grow in strength.

The name Audhumbla means the cow rich in milk, the cornless cow.

Since the concept of time did not exist yet, nobody knows how long the cow was licking the same salty rime rocks, but rumors say that it was three days. On the first day some hair appeared, then the head, and on the third day a new being stood completely uncovered. This was Búri, the ancestor of Odin, and to all the Aesir.